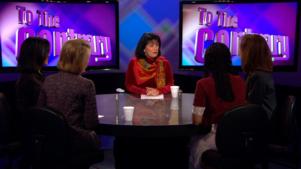 This week on To The Contrary, our panelists discuss how to help low-income women, the abuse women face online, and ageism.

The Shriver Report asks what low-income women need to help them break the cycle of poverty.

Online Misogyny
Writer Amanda Hess sparked a national conversation about the abuse women face on the internet.
Ageism
Professor Lynne Segal argues in her book Out of Time that ageism is the new frontier of feminism.
Be sure to tune in this week for more discussion! Click here to check your local listings.