TTC Panelists Discuss the Vatican, "Female Viagra", and Pollution in the Water 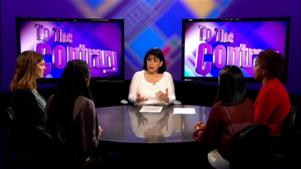 This week on To The Contrary, our panelists discuss the United Nation's scrutiny of the Vatican, the sex drive pill for women that was rejected by the FDA, and how pollution in the water affects women and children.

NPR Program Host Avis Jones DeWeever,  Conservative Commentator Darlene Kennedy, RH Reality Check Editor at Large Erin Matson, Republican Strategist Rina Shah, and Environmental Working Group Executive Director Heather White.
Click read more to see what they had to say!
rin- Ava- S- "The reality is it's out there. It's open and women are no longer expected to just sit on the sidelines and say look, "I don't want to enjoy...I don't need help."We don't exactly know that it was just because it was a woman's drug."

The UN grilled the Holy See over its response to the Catholic sex abuse scandal.

"Viagra for Women" Rejected
The FDA did not approve a pill aimed at helping with women with low sex drive.
WV Pollution Leak
Pregnant women are being advised not to drink water as a chemical spill polluts the Elk River.
Be sure to tune in this week for more discussion! Click here to check your local listings.