Too Many People, Too Little Water
The Drying of America 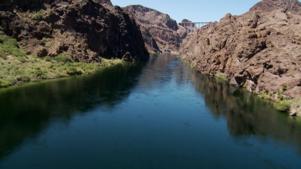 To the Contrary takes an in-depth look into our depleting water supply; the causes and what, if anything, we can do to reverse this trend. From Nevada, Arizona and California in the west to North and South Carolina on the east coast, this provocative documentary takes you to communities struggling with the impact of this critical problem.

The western half of the U.S. suffers from a drought, in many areas extreme or exceptional drought. The once plentiful, Colorado River used to flow from the Rocky Mountains in the U.S. to Mexico and empty into the gulf of California. But now it dries up before it ever gets there. Nearly 40 million people rely on the Colorado River, as a source of water, and power. It irrigates nearly 5.5 million acres of land and is the lifeblood for at least 22 federally recognized Native American tribes, seven national wildlife refuges, four national recreation areas and 11 national parks.
And it's not that much better on the east coast where Georgia, Tennessee and the Carolinas have taken their water battles to court.
The Drying of America rides along with water investigators who patrol neighborhoods for illegal waste of water in Nevada. It profiles Robert Redford's campaign urging people to help reconnect the Colorado River with the Gulf of California. And, meet farmers who are looking for innovative solutions to keep their crops growing.
"We are spoiled in the U.S.  When we wake up in the morning we turn on the tap and out comes as much water as we want for less than we pay for cell phone service or cable TV.  When most of us think about water, we think of it as though it was the air, infinite and exhaustible."
-- Robert Glennon, Regents' Professor, Morris K Udall of Law and Public Policy, Author “Unquenched”
“This country right now is hurting over oil but we can get by with a lot less oil.  If I had to, I can ride a bike a bit or I could walk a little further but I don’t know any way this country is going to survive if we do not take the steps necessary now to protect this resource.”
-- South Carolina Farmer
"We need to collectively work on solutions to be able to thrive in that drier future but those solutions are not simple.  There is no one thing that is going to solve the problem."
-- Anne Castle, Assistant Secretary of the Interior
"There is every reason to be concerned about the water supply in the Western U.S."
-- John Entsminger, General Manager of the Southern Nevada Water Authority
"Population is the lephant in the room, not just in the water crisis but in every environmental problem. You can't name one that doesn't come down to the fact that there are too many of us."
-- Robert Glennon