Why are Smart Women Waiting Until the Onset of Menopause to Try to Have Kids? 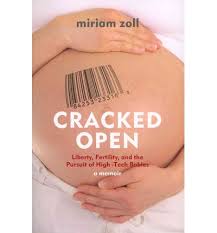 In a recent PBS “To the Contrary”show about the infertility industry, host Bonnie Erbe` asked: Why did Miriam Zoll wait until age 40 to try to become a mother?

Over the last four decades, we emancipated daughters of America have been taught that we have the power to control our destinies. Programs like the Ms. Foundation for Women’s original “Take Our Daughters To Work Day,” which I helped co-produce, reinforced the notion that we could grow up to be just about anything­­––from astronauts to doctors, to lawyers or plumbers. With abortion and contraceptives legally accessible, we believed from an early age that we could control our reproduction, too. If the Pill could help us prevent unwanted pregnancy, surely we could just as easily manifest a wanted pregnancy whenever we were ready. If we encountered obstacles, well, there was always reproductive medicine like in-vitro fertilization (I.V.F.) to save the day.

When it came to motherhood, from the late 1990s onward, rumors like “40 is the new 30” began to spread like wildfire among a small demographic subset of mostly educated, middle class women. With the media and cultural discourse fortifying the myth that modern women’s reproductive systems were now, somehow, superhuman, millions of women assumed it was safe to wait. Over glasses of red wine, we celebrated the timing of our good fortune, recognizing that unlike the women who came before us, we were not bound by our reproductive biology.

This is the backdrop that literally pushed the ‘old’ notion that women’s (and men’s) fertility declines in their 30s off the proverbial table, and paved the way for the current, confusing discourse on the subject.

The modern cultural dialogue brazenly defies—or misinterprets––volumes of contemporary medical evidence confirming that, on average, ovarian reserve sharply drops after 37.5 years.[i] A case in point is a well-publicized June 2013 article in the Atlantic magazine, written by psychologist Jean Twenge and titled: “How Long Can You Wait to Have a Baby?” Twenge, who birthed her own children after age 35, asserts, “Women's age and fertility...is one of the more spectacular examples of the mainstream media's failure to correctly report on and interpret scientific research."

Unfortunately this charge also applies to Twenge herself.

To support her argument that fear of fertility decline in our 30s is overstated, Twenge cites several recent studies, including 2004 research by David Dunson, et al, now at Duke University, and a 2013 study by Kenneth Rothman of Boston University. Conveniently, she fails to reveal to readers the title of Dunson’s study, "Infertility Increases With Age in Men and Women,"[ii] or the conclusion from Rothman’s study that “fertility peaks at around 30 for both males and females”.[iii]

It is true that Dunson did find that younger “women aged 30–34 years were similar to the 27 to 29-year-olds, but…women aged 35–40 years had further reductions in their probabilities of pregnancy.” He writes that “pregnancy rates decrease steadily with [the] increasing age of the woman” and that “the majority of couples in their 30s experience a gradual decline.” In an email exchange I had with Dunson in January 2014 he wrote: “…Certainly any general statement that fertility does not decline with age would be very strange, and one could not conclude that at all based on our results.”

Why have so many of us then––myself included––flat out rejected the notion that, as our bodies age, so too, do our eggs?  One reason certainly rests with the fact that many ‘sex education’ programs are not as comprehensive as they should be. The focus on pregnancy prevention is obviously important, but so is ensuring that young women and men understand that their reproductive lifespans have a beginning, middle and end. In addition, many of us mistakenly trusted like a religion the modern notion that we, or scientific technology, could successfully manipulate our reproduction. In this context, the statistics about fertility decline make absolutely no sense to our culturally and media-lived experience––or our expectations of gender equality. To hear otherwise is to contradict our construct of reality.

Which is why, when the messengers step forward to warn us that pregnancy rates decline with age, or that miscarriage rates and maternal-infant health risks increase with age, and that I.V.F. cycles fail 80 [iv] percent of the time globally and 71 percent of the time in the U.S., [v] we chase them away with the modern equivalent of a proper tar-and-feathering. We accuse them of scare mongering.

One of the best examples of this kind of backlash came in 2001, when the American Society for Reproductive Medicine (ASRM) launched an infertility prevention campaign that met with fierce criticism on a number of fronts. The campaign’s advertisements featured the image of a baby bottle in the shape of an hourglass surrounded by text explaining how factors such as age, smoking, weight, and sexually transmitted infection can hamper future fertility. Kim Gandy, then president of the National Organization for Women (NOW), was quoted as saying: “Certainly women are well aware of the so-called biological clock. And I don’t think that we need any more pressure to have kids.”[vi]

But now it’s thirteen years later and research from around the world confirms that women and men of reproductive age often have very little knowledge about their natural fertility peaks and declines. Studies conducted among college students in Sweden (2005), Canada (2010), and Israel and the United States (2012),[vii] for example, all point to a pervasive lack of knowledge about women’s fertility and overestimations of the success rates of reproductive technologies.

Only a small minority of Swedish students knew that women’s fertility rapidly declined in their late 30s, and 33 percent of the Swedish men thought a woman’s fertility did not sharply decline until after the age of 45. The Canadian study of undergraduate women found that “they significantly overestimated the chance of pregnancy at all ages and were not conscious of the steep rate of decline for women in their thirties.” In Israel, college-age participants were “overly optimistic about women’s capacity to conceive, not only naturally, but also with the aid of I.V.F.”

In the 2012 survey of U.S. undergraduates, 66 percent of women and 81 percent of men believed that female fertility did not markedly decline until after the age of 40. One-third of women and nearly half of men believed this marked decline occurred after the age of 44—an age at which an I.V.F. cycle is least effective. The study concluded that “the discrepancy between participant’s perceived knowledge and what is known regarding the science of reproduction is alarming and could lead to involuntary [biological] childlessness.”

The price many couples pay for not understanding the nitty-gritty facts of their reproductive lifespan is huge. In August 2008, the U.S. Census reported that the number of women aged 40 to 44 who were childless had doubled in a generation. In June 2006, 20 percent in that age group were childless compared to only 10 percent thirty years earlier—prior to the increasing reliance on infertility treatments as a last resort.[viii] The report does not cite specific reasons for the increase, but the trend to delay marriage and motherhood is a likely factor, as is the decision to live a childfree life.

Reproductive health misinformation in the media and the Internet, and its whisper-down-the-lane ripple effect in our culture, is a huge disservice to women and men who want to become parents one day. To plan accordingly, they need access to accurate information about their reproductive health, and about the high failure rates, health risks and ethical considerations linked to assisted reproductive technologies.

Miriam Zoll is the author of the new book, Cracked Open: Liberty, Fertility and the Pursuit of High-Tech Babies (2013), and a member of the board of Our Bodies Ourselves, the global women and girls’ health and human rights organization. (www.miriamzoll.net)