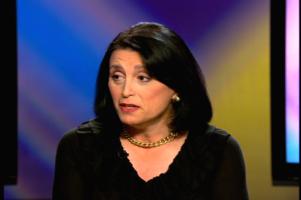 
Here's my retort to what is on its face a partisan distortion (to put it diplomatically) of my views. One Mr. David Neiwert, writing for the Southern Poverty Law Center, produced an article on June 7, 2014, retweeted and posted by Salon.com. It began: "Bonnie Erbe, the longtime host of the Public Broadcasting Service’s “To The Contrary” program, has long been a proponent of dubious claims that immigration depletes natural resources and worsens global warming, as well as an apologist for the anti-immigrant Center for Immigration Studies (CIS). So it was not really a surprise when CIS awarded Erbe its annual journalism prize this year for her “reporting on immigration’s effects on health care, poverty, and natural resources, as well as on birth tourism.”

He was referring to the fact I won a Katz Award from the Center for Immigration Studies for coverage I produced on an immigration issue commonly referred to as Birth Tourism. The story has been covered before and since by all the commercial news networks, the major newspapers http://nyti.ms/1hInENE, etc. Most of what was in our program had been reported elsewhere. We were however, I believe, the first to report that birth tourism operators were defrauding the state of California's medical system.  After the show aired, I decided to submit it for awards to raise awareness and encourage debate. To the Contrary as a show and I individually, have won perhaps 20 journalism awards over the show's 23 season run and my 35-year career as a journalist. So I wanted to branch out and apply for several awards we had never won to encourage debate about this important issue. We applied for a Katz award and two others. We did not win one of the others and the winners of the third award won't be announced 'til summer's end.

Let me address several of Mr. Neiwert's statements. He said, as above, that I am "a proponent of dubious claims that immigration depletes natural resources and worsens global warming." Dubious claims? I refer you to this 2008 Scientific American article website http://bit.ly/1hIso5S to consider whether such claims are dubious:

"What to do about booming legal and illegal immigration rates is one of the most controversial topics on Americans’ political agenda these days. More than a million immigrants achieve permanent resident status in the U.S. every year. Another 700,000 become full-fledged American citizens. The non-profit Pew Research Center reports that 82 percent of U.S. population growth is attributable to immigration.

Meanwhile, the U.S. Census Bureau estimates that U.S. population will grow from 303 million people today to 400 million as early as 2040. While many industrialized nations, including Japan and most of Western Europe, are experiencing population growth slowdowns due to below replacement birth levels and little immigration, the U.S. is growing so fast that it trails only India and China in total numbers."

I suppose, then, Mr. Neiwert would also accuse Scientific American, the US Census Bureau and the Pew Research Center of making "dubious claims." He called me an "apologist" for CIS and other organizations working to lower immigration levels. I am an apologist for no one. I quote CIS' studies, along with studies from the United Nations, Columbia University (my alma mater), Scientific American, the Census Bureau and a host of other partisan and nonpartisan organizations. That does not make me an "apologist" for any ideology. I accepted an award from what liberals view as a conservative organization. That does not make me a conservative, nor does it imply I agree with the Center for Immigration Studies on all its positions.

I was surprised and pleased to see Mr. Neiwert's use of large chunks of my acceptance speech in his article. He included a segment in which I repeated what I always say on this topic, immigrants are not the problem. They are overall a great asset to this nation. Mass immigration is the problem. He quoted me at length talking about how I fell away from "progressive" thinking on environmental issues. Indeed I have due to people just like him. But he used the quotes to make me out as having become a conservative, which is completely inaccurate. I toe no ideological nor partisan line. I have devoted my career to women's advancement and promoting diversity in American culture. Does that make me a progressive on those issues? You might say yes. I say I pick and choose my views based on the facts and the truth. The lion's share of my journalism awards has been for coverage of what many would see as progressive issues: women's rights, diversity, LGBTQ equality, de-stigmatization of mental illness and so on. But I have come to see that none of those issues matters if we don't stop climate change. There simply will not be enough, if any, habitable land in the U.S or anywhere if we don't stop rising sea levels, ocean acidification and storm intensification. The human race will make itself extinct.

What is causing climate change? It's pretty simple: human overuse of limited environmental resources. Not since the 1970s has there been serious discussion of this issue in the U.S. My sole purpose in covering these issues is to stimulate discussion of them, not to lobby on them or to press for a particular legislative solution.

Immigration is the primary driver of population growth in this country. If native-born American women were having too many babies and overpopulating the nation, I would be writing about that. The fact is immigrants and their children are the primary drivers of population growth. Few people are comfortable discussing that. Many on the left want to suppress the mere mention of it.

Sen. Gaylord Nelson, the founder of Earth Day and one of the nation's most impassioned and effective environmentalists told the Milwaukee Journal Sentinel in 2001, "The bigger the population gets, the more serious the problems become…. We have to address the population issue. The United Nations, with the U.S. supporting it, took the position in Cairo in 1994 that every country was responsible for stabilizing its own population. It can be done. But in this country, it's phony to say 'I'm for the environment but not for limiting immigration.'"

I don't know who David Neiwert is. I never heard of him before this weekend. He never contacted me for comment before writing a story about me. If he watched the show that won the award he made no mention of it. I find it extremely saddening that what passes for liberalism in today's partisan climate amounts to censorship.  To that end, and to keep a balanced civil discussion alive on this incredibly important topic, I won’t cave into it.