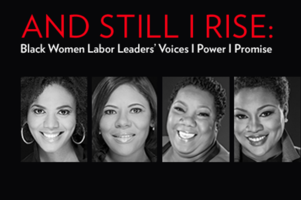 As an African American woman entering the workforce I have noticed how most leadership and high level positions are held by white men. I was excited when I found out I would be working with To the Contrary Associate Producer Ariel Edem to produce a package about African American women leaders in the labor force. I was very excited to be a part of creating this segment because it was directly related to me. After reading the book And Still I Rise: Black Women Labor Leaders, I delved even deeper into the issues of workforce inequality.  And Still I Rise was written by Kimberly Freeman Brown, who compiled 27 interviews from different female African American labor leaders nationwide. These women were from a variety of industries and shared their experiences throughout the different stages of their careers. The book highlights many of the issues African American women face that often times prevents them from excelling to leadership roles. I realized these were very serious issues I would probably face in the near future. Although women make up 51% of the US population this is not reflected when it comes to leadership. I had the privilege of sitting down with Ms. Brown and getting a more in depth look at the overall issue and her motivation for writing the book.

Ms. Brown outlines many of the issues that Black women in labor and in the work force in general face such as wage theft, sexual harassment, racial discrimination, and unequal pay for women. She explains that despite barriers, young Black women aspire to leadership positions and how important it is for them to see others like themselves in these roles. She goes on to acknowledge Black women labor leaders like Arlene Hope Baker and Clayola Brown stating, “they want to be sure that the voices of people who look like them, who aren’t often in decision-making positions as it relates to what they do for a living, they want to make sure that their voices are heard.”

I also had the privilege of sitting in on an interview with the Director of the Women’s Bureau at the US Department of Labor, Latifa Lyles. Director Lyles spoke about giving women more opportunities, getting them on the path to higher paying jobs, and the importance of mentorship.  In the words of Ms. Lyles, “what we’re finding in this country is that while women make up half of the labor force and are graduating at even higher rates, certainly the case with lots of women of color and their communities as well graduating at higher rates at all levels, they’re still not getting an equal shot at career advancement.” Ms. Lyles also spoke about where majority of women are concentrated in the workforce. “Women of color makeup a disproportionate number of low wage workers so that includes minimum wage jobs and below in many cases.” Lyles spoke about her perspective and experiences in her career that led to her leadership role and also what the Department of Labor is doing to resolve some of the issues minority women face.

I am so grateful to work on this project and to have the opportunity to speak with these amazing women. I was very inspired by the women I interviewed and read about in the book. Seeing women who look like me in high level leadership positions gives me hope and confidence that I can one day achieve the same level of greatness. There are so many barriers and challenges I have to face simply because of my sex and skin color alone, hearing these women overcome those same obstacles and rise to powerful leadership roles where they can help others like me, has inspired me to lead. There are so many people and elements in today’s society that tell you that you cannot do something, suppress your dreams and aspirations before you’ve even had a chance to pursue them. When I see people like Kimberly Freeman Brown, Latifa Lyles, and Arlene Hope Baker overcome these barriers not only for themselves but to inspire and bring hope for young women like me, it ignites  a fire in me to want to do the same for others.

When I was a young child in school my teacher used to tell me I could be anything I wanted to be, and I believed that. Somewhere down the line this was lost. When you grow up only seeing male presidents you think you can’t be a president because you’re a girl.  When you see a field or industry dominated by men, you think you can’t succeed in that field, because there is no one in that field who looks like you. It’s thoughts like these and the people who support them that discourage woman from aspiring to leadership roles. These ideals are learned at such a young age and are played out over and over again throughout our lives. That’s why I am so grateful for the women who against all odds attain the unattainable, and don’t stop there but continue to use that as a platform to inspire future generations.  They change the ideals and perceptions.

As an African American woman in the male dominated field of Communications Media I will strive to become a great leader in my field and help other minority woman do the same. I truly believe what my teacher told me so many years ago, that I can be whatever I want to be.  The sky’s the limit and I want all young women to think this way and let go of those negative thoughts and barriers that are holding them back from success. I know for a fact that I will have to work twice as hard because I am a woman, and even more so because I am a Black woman, but I am prepared to go above and beyond to achieve my goals. No matter what stands in my way I will live by the words of Maya Angelou’s famous poem Still I Rise and I will continue to rise above all of the injustices, prejudices, sexism, and racism I face and will continue to face during my journey to the top. I am looking forward to learning more about this important issue and the women that are addressing it. Make sure to stay tuned for this segments which will air on Labor Day weekend.