When We Fight We Win 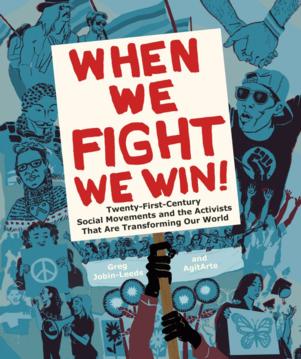 I’ve stolen my title from Greg Jobin-Leeds and AgitArte’s handsome new book, which contains examples of the boldly-colored posters that now signal great progressive causes and serve to drum up support.

Here in Santa Fe, these posters don’t appear much anymore. Instead, we have hand-made signs, held up at our infrequent protests, and box lids homeless people display with their appeals by the sides of the road.

Perhaps the disappearance of posters produced by U.S. artists has a thread of connection with the popular disparagement, during the Cold War, of then-Russia’s dramatic use of them to depict Communist workers and factories. I remember one traveling exhibition of this work during the 1950’s which was met with sneers—”Just a lot of tractors!”

Those posters stood in bold contrast to the Impressionist paintings so popular then and now. Not too many of us notice the distant factory chimneys in some of Monet’s most beautiful and tranquil landscapes.

The presence, the faces, and the words of the Navajo were themselves living images, engraving on my mind the urgency of a cause I've known about for years but never felt personally. Disparaging images seem to lead to disparaging the concepts they represent; it was at about the time of this exhibition that the McCarthy hearings—our twentieth-century inquisition—led to the blackballing of artists and our national ignorance of and equal terror of certain words: Socialism, Communism. The best thing about Bernie Sanders’ campaign may prove to be that some people begin to wonder about the meaning and legitimacy of the word, socialism.

All this leads by perhaps imperceptible degrees to the amazing scene I witnessed at the Santa Fe Capitol last week. Our Legislature is in short session, only thirty days, primarily to consider the disastrous diminishment of the state budget due to our total reliance on oil and gas revenues, which have fallen disastrously.

The day I went to the Roundhouse, as the circular state capitol is called, perhaps in recognition of the long-ago importance of railroads and their roundhouses to the state, was the day laid aside for presentations—mini-protests—by a number of our very active conservation groups.

Since I support the League of Conservation Voters, I was asked to witness their moment in the center of the atrium to address a crowd of citizens. This light-filled space is surrounded by wedding-cake tiers of state offices where a group of Navajo from the Four Corners area had just presented their case to their legislators.

Conservation Voters New Mexico - New Mexico State Capitol - February 12, 2016 Their enormous reservation, one of the poorest areas in the country where many inhabitants are without electricity or running water, has been further decimated by uranium mines whose operations contaminate the groundwater and pollute the air.

This is not a remote problem for the eight or ten Navajo who’d carpooled since four A.M to reach Santa Fe to make their case. They stood before us with great dignity. Each person had something to tell us about the health problems resulting from their exposure to the uranium mines. I was especially struck by an elderly woman who spoke vigorously and at length, in Navajo, the power of her presentation hardly affected by being spoken in a language few of the white audience knew.

No, there were no posters, not even any hand-written signs. But the presence, the faces, and the words of the Navajo were themselves living images, engraving on my mind the urgency of a cause I’ve known about for years but never felt personally.

And yes, the bill to allow yet another mine was taken off the table that day. It will not even be considered by the Legislature in spite of heavy pressure from the well-funded lobbyists for the uranium industry.

When we fight we win. At least for now.