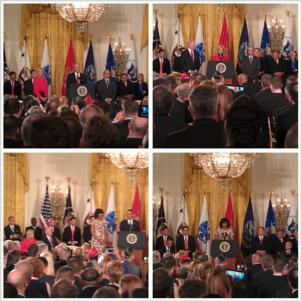 Joining Forces is First Lady Michelle Obama and Dr. Jill Biden’s program designed to help servicemen and women transition back into the workforce.  It has already hired or trained 290,000 veterans, almost tripling the original goal of hiring 100,000 veterans by 2013. Dr. Jill Biden helped the First Lady set it up 2 years ago. One thing Joining Forces does is streamline the time it takes to become a licensed professional.  Thirteen states have passed laws to do the same thing.

The program also helps servicemen and women land jobs with businesses that have pledged to employ new veterans. Vice President Joe Biden says it’s every American’s “one truly sacred obligation”. “No one who fights overseas for this country should come home and have to fight for a job,” Mr. Biden says. He adds about the “9/11 generation, many of them still have a future…so this obligation is real and it’s going to be lasting.”
Dr. Jill Biden’s met with lots of military wives and families. She says every family shares one quality, “They never complain. Whatever the situation they keep on serving doing whatever needs to be done.”
With the original goal met, First Lady Michelle Obama is taking it a step further, asking businesses to hire or train 435,000 more veterans or military spouses by the end of 2018. “This is about giving men and women a sense of identity, and purpose. .. Giving our veterans and military spouses the confidence that they can provide a better future for their children.”
Companies such as UPS, Blackstone and the International Franchise Association have pledged to hire thousands of veterans in in the next 1-5 years. Wal-Mart is offering to hire any honorably discharged veteran within his or her first 12 months off active duty starting this Memorial Day.
President Barack Obama calls the military/business alliance “a patriotic thing to do, it’s the smart thing to do,” with more than 1 million service members projected to leave the military in the next several years—many of their skills applicable to the mainstream workforce. “If you can lead a platoon in a war zone, then I think you can lead a team in a conference center,” Mr. Obama says. “Serving military families has to define who we are as citizens.”