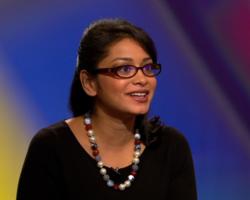 Anushay Hossain is a Bangladeshi writer and media personality based in Washington, DC whose work is published on CNN, Forbes, The New York Times/WITW, The Daily Beast and more.

AnushaysPoint.com is her website where you can find all her articles and commentary work for major national and international media outlets.

Anushay’s career in women’s rights began as an intern at the Bangladesh Rural Advancement Committee (BRAC) where she worked on micro-finance for women in her native country, Bangladesh.

A University of Virginia graduate, Anushay joined the Feminist Majority Foundation’s Nobel Peace Prize nominated, “Campaign for Afghan Women & Girls” prior to completing her MA in Gender and Development at the University of Sussex in England.

After a year at the United Nations Development Fund for Women’s (UNIFEM UK) London office, Anushay returned to Washington, DC where she spent almost a decade analyzing the impact of US foreign policy on the health and rights of women and girls around the world.

Anushay finally went full-time with her writing in 2013, and frequently travels to leading colleges and universities across the country giving talks on gender, politics, and the Muslim experience in America.

In 2014, Anushay was welcomed as a member of The National Press Club in Washington, DC, one of the most prestigious journalistic organizations in the world.

Anushay is a Managing Director of The Daily Ittefaq, Bangladesh’s oldest and most historic national newspaper founded by her grandfather, renown Bangladeshi journalist, Tofazzal Hossain. She also writes a fortnightly column for her family’s paper.

A fervent lover of cultures, Anushay spent a year in Italy studying Italian and is fluent in six languages. She is married and lives in Washington, DC with her Iranian-American husband, their daughter, and Persian cats.