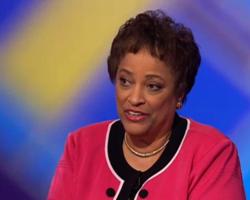 Kay Coles James is the founder and President of the Gloucester Institute, a non-profit organization dedicated to preserving African American history while leaving a legacy of faith and ideas.

A graduate of Hampton University, Mrs. James is the recipient of numerous honorary degrees, most recently the Doctor of Laws Degree from Pepperdine University. As a commentator and lecturer, Mrs. James has appeared on every network morning show, several national news and talk programs. Her editorials have been featured in newspapers across the country.

Mrs. James is the author of three books; her award-winning 1993 autobiography Never Forget; Transforming America: From the Inside Out; and a third book on the subject of marriage, What I Wish I Had Known Before I Got Married.

Most importantly, Mrs. James is the wife of Charles E. James, Sr. and the proud mother of three children and grandmother to three grandchildren.