The Constitutional Convention of 1787
The delegates at the 1787 Convention faced a challenge as arduous as those who worked throughout the 1780s to initiate reforms to the American political system. In this unit, students examine the roles that key American founders played in creating the Constitution, and the challenges they faced in the process.

Ratifying the Constitution(Grades 9-12)
This lesson introduces students to the vigorous debates surrounding the ratification of the Constitution that took place in the state conventions.

The Federalist and Anti-federalist Debates on Diversity and the Extended Republic(Grades 9-12)
In this unit, students will examine some of the most important arguments of those opposing or supporting the Constitution. They will learn why Anti-federalists believed that a large nation could not long preserve liberty and self-government and why Federalists such as James Madison believed that a large nation was vital to promote justice and the security of rights for all citizens, majority and minority alike.

John Marshall, Marbury v. Madison and Judicial Review—How the Court Became Supreme(Grades 9-12)
If James Madison was the "father" of the Constitution" John Marshall was the "father of the Supreme Court"—almost single-handedly clarifying its powers. This new lesson is designed to help students understand Marshall's brilliant strategy in issuing his decision on Marbury v. Madison, the significance of the concept of judicial review, and the language of this watershed case. 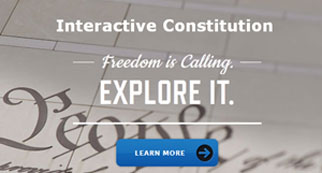