In the early 1900s, dramatic stories of the abuse and wretched conditions of convict laborers began to be publicized through trials and newspaper accounts. The egregiousness of the violence and corruption of the system began to turn public opinion against convict leasing. Though many citizens and politicians wanted to abolish convict leasing, the problem of the expense and difficulty of housing convicts remained. Chain gangs developed as a popular solution to that problem.

Chain gangs were groups of convicts forced to labor at tasks such as road construction, ditch digging, or farming while chained together. Some chain gangs toiled at work sites near the prison, while others were housed in transportable jails such as railroad cars or trucks. The improvements they made to public roadways had significant impact on rural areas, allowing planters to more quickly and more easily transport their crops to market.

Chain gangs minimized the cost of guarding prisoners, but exposed prisoners to painful ulcers and dangerous infections from the heavy shackles around their ankles. An individual’s misstep or fall could imperil the entire group, and chains prevented individuals from moving away from aggressive or violent prisoners. Chain gangs eventually gave way to work gangs – groups of prisoners who worked off-site and under guard, but not in chains. 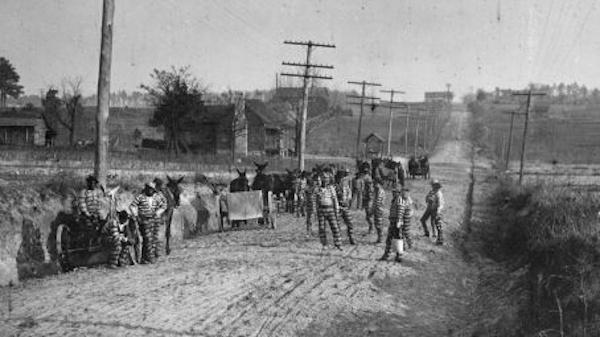 The Evolution of the Chain Gang

Descendant Tonya Groomes reflects on how this re-enslavement has effected so many people.

The Significance of the Chain Gang

Reflections on the Chain Gang System

Descendant Bernard Kinsey expresses his reactions to the chain gang system and its effect.