Fukushima Reactor Damage May Be Worse Than Previously Thought

The damage to reactor two at the Fukushima Daiichi nuclear plant may be more more serious than the Tokyo Electric Power Company (TEPCO) originally disclosed, according to results of an internal investigation that were released this week.

TEPCO now says that the reactor contains only two feet of water in its dry well containment vessel. In January, TEPCO sent an endoscopic camera down into the reactor; at that time, they said they couldn’t determine the water level, though they had expected to find 13 feet. 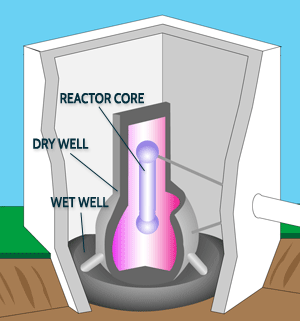 Diagram showing basic design of a Mark 1 reactor like those of Fukushima Daiichi. When functioning properly, the reactor at center is filled with circulating water that bathes the contained fuel. Essentially a reinforced concrete container, the drywell is the first line containment vessel should the reactor become compromised. Below that is the wet well, which is a hollow steel donut filled with water. (Source: Nuclear Regulatory Commission)

Without water to cover it, nuclear fuel is likely to heat to levels that could further compromise the reactor structure. Reactor two’s core is known to be cracked and two feet is likely adequate to cover the fuel that has leaked from the reactor core to the dry well. However, the missing water indicates that levels may also be low in the reactor core, which is thought to still retain the bulk of the reactor’s fissionable material. Because the dry well catches the leakage from the cracked reactor core, both the core and containment vessel must be filled with water to maintain a safe level in the core.

Further, low water levels raise the question of where the water is going if it’s not remaining in the dry well. In April 2011, The New York Times reported that water contaminated with radioactive iodine isotopes was observed flowing directly from the reactor into the Pacific Ocean. The obvious leaks have been stayed, but TEPCO and observers have expressed concern that the integrity of the reactor floor has been compromised below ground and coolant may be leaking into the groundwater and the nearby ocean.

Today TEPCO announced that it had abandoned its plans to build two new reactors at the Fukushima Daiichi site. Another company, Tohoku Electric Power Co, is still planning to build a new 825 megawatt nuclear reactor in the vicinity, but did not provide a date for the project’s completion.