For more than 30 years, Gaétan Dugas was blamed for bringing the AIDS epidemic to the United States. A French-Canadian who died in 1984, Dugas was thought to have carried the disease to America and transmitted it to scores of sexual partners while working as a flight attendant.

But this week, scientists finally cleared the name of the man who, in the history of the AIDS epidemic, came to be known as “Patient Zero.”

In a study published in the journal Nature, the researchers found that blood sampled from Dugas in 1983 contained the same strain of HIV that was infecting men in New York City as early as 1971 — three years before he arrived in the U.S. as an employee for Air Canada.

“In short, we found no evidence that Patient 0 was the first person infected by this lineage of HIV-1,” the researchers wrote.

The study builds on decades of research that has sought to answer the medical mystery of how exactly AIDS made its way to the U.S.

According to the study, the strain of HIV responsible for nearly all AIDS cases in the U.S. first traveled from Africa to the Caribbean nation of Haiti around 1967 before arriving in New York City around 1971. By around 1976, the disease would spread to San Francisco. It would be another five years before the very first reported cases of the disease would be published by the Centers for Disease Control and Prevention in its Morbidity and Mortality Weekly Report.

The path outlined in Nature provides important new details to the medical community’s understanding of the early history of HIV/AIDS in America — a history traced by FRONTLINE in the landmark 2006 film, The Age of Aids, which documents scientists’ furious search for the source of the epidemic.

Among those scientists was Sheila Mitchell, who in 1983 was among a team of epidemiologists from the CDC that traveled to Kinshasa, Zaire to investigate reports of AIDS cases in the country.

“The whole team was amazed at how immediately they could identify 10, 20 cases right away that would meet our definition for AIDS,” says Mitchell, in the below scene from The Age of Aids. “… At the time, the world was thinking that this was a gay men’s disease. When we came up with the numbers that half our patients were women, it started to make people think, ‘Well, maybe this could be a disease that could be transmitted to the general population,’ and I think it caused quite a bit of alarm.”

One year before Mitchell and her colleagues landed in Zaire, Dr. Margaret Fischl would arrive in Haiti from the Miami, where she had been treating Haitian immigrants demonstrating symptoms of AIDS. As she told FRONTLINE, “The diversity of what we were seeing was incredible. There were gay men vacationing in Haiti. There were Haitians going to Africa. There was likely drug use. So it just really reinforced that there was nothing that was different about a Haitian that was different about an American for that part. It was really, you know, how this virus was being transmitted.”

By that point, the disease had already been in the U.S. for more than a decade, according to the Nature study. In the more than three decades since its arrival, AIDS has killed more than 500,000 in the U.S. alone.

For more on the science, politics and human cost of the disease, watch The Age of Aids in full here. 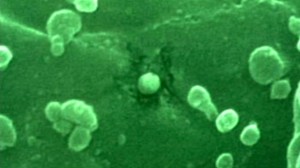 The Age of AIDS