Before Russia invaded Ukraine in February 2022, the Heroes of Labor metro station in the Ukrainian city of Kharkiv was an ordinary subway stop.

By late March, the station had become something else for hundreds of Ukrainians: home.

With their families, a smattering of their belongings and their pets — kittens, dogs, birds — these residents of Ukraine’s second-largest city moved their lives underground and set up camp, seeking safety amid Russia’s assault.

“We understand there’s a war,” said 10-year-old Vika, who moved into the subway-station-turned-bomb-shelter with her mom, grandmother and little brother. “But we don’t understand why it has started.”

An up-close look at Vika and hundreds of other people’s wartime reality unfolds in the above excerpt from the new documentary Ukraine: Life Under Russia’s Attack. Filmed during the first three months of the war, the documentary premieres on PBS and online Aug. 2. In intense detail, it chronicles the experiences of Ukrainians living through the battle for Kharkiv: civilians caught in the shelling; first responders risking their own lives; and so many people, like Vika, trying to survive underground.

“How is it possible to kill another human being?” asked 86-year-old Vitali, a former theater actor who was strolling the crowded station with his guitar. “I think it’s all stupid and unnecessary.”

As seen in the above excerpt, the film team documented vivid subterranean scenes. Belongings, bedding and makeshift tents lined the station’s stairs and floors. People watched TV news silently, as footage of the destruction above ground played out. A man handed out presents — a Batman costume, a pink backpack — to excited children, asking them if they’ve been well-behaved. With the subway no longer running, two young girls played in a decommissioned train car.

Amid it all, many tried to maintain a normal routine. Despite the shelling, aid workers arrived to provide two basic meals a day. Vika played with her brother and, with her mom’s encouragement, tried to keep up with her schoolwork.

And sometimes, Vika — who took ballroom dancing classes before the war — looked through photos from her former life on her mother’s phone.

“That’s me at the dances,” she said proudly.

“What a beauty!” her mother chimed in, laughing. “She got medals! Our little Vika.”

Even though the war had driven her family underground, Vika said she had no desire to flee the nation she calls home.

“I want to stay in Ukraine,” she said later in the documentary. “I don’t want to go to any other country.”

For the full story, watch Ukraine: Life Under Russia’s Attack, a Basement Films production for GBH/FRONTLINE in association with Channel 4. It premieres Tuesday, Aug. 2, 2022, at 10/9c on PBS stations (check local listings) and will be available to stream at pbs.org/frontline, in the PBS Video App and on FRONTLINE’s YouTube channel. The documentary was filmed, produced and directed by Mani Benchelah and Patrick Tombola; produced in Ukraine by Volodymyr Pavlov; and directed in London by Teresa Smith. The editor is Agniezska Liggett. The production manager is Leah Downs. The executive producers are Ben de Pear, Edward Watts and Cate Blanchett. The executive producer and editor-in-chief for FRONTLINE is Raney Aronson-Rath. 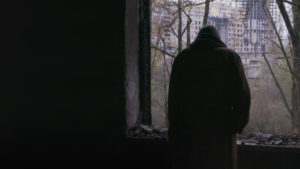