If World On Fire’s Nancy Campbell seems familiar, it’s more than just the fact that she is played by Academy Award-winning actor Helen Hunt. The no-nonsense war correspondent was based in part on the legendary Clare Hollingworth, and in this special episode of the podcast, we share Hollingworth’s own memories of the German invasion of Poland in 1939.

MASTERPIECE thanks the British Imperial War Museums for the use of their 2011 oral history of Clare Hollingworth.

In the gripping opening episode of the new MASTERPIECE World War II drama World On Fire, American journalist Nancy Campbell uncovers a secret which viewers at home already know: Nazi Germany is gearing up for war.

Nancy What am I doing here? I’m an American journalist, I have every right. What are you doing here, young man? A German soldier on Polish soil?

Jace Normally based in nearby Berlin, Campbell drops by the elegant Polish capital on a story lead. What she discovers on her drive through the picturesque countryside is more than she — or anyone else — expected.

Harry You said you only needed it for shopping!

Nancy The shopping was in Germany.

Nancy This is what I’ve been trying to tell you. The Nazis are so close to the border they shot at me.

Harry Well, you do rub people up the wrong way.

Nancy  They are shooting some poor bastards, putting them in Polish uniforms to make it look like the Poles invaded. Does that sound like a diplomatic solution?

Jace In a road just along the German-Polish border, Campbell spies German troops shooting soldiers in Polish uniforms on the German side of the border, giving the German Army a loose but legally acceptable reason to invade their Polish neighbors. It’s a stunning slice of dramatic convenience for the beginning of our series, but it’s one with origins in truth.

Peter Bowker One of the models for Nancy was a journalist, British journalist called Clare Hollingworth, who only died recently.

Jace This is Peter Bowker, the creator of World on Fire, in an upcoming interview with this podcast.

Peter And she was on a bridge in Vietnam,  as a war correspondent in Vietnam, and she’d been in the Second War, too — a rope bridge crossing and her and two other journalists were being fired at by the Viet Cong. And she said, ‘Oh, I’ve never felt so alive!’ There was something in that mentality of, the chaos of war is where I belong, which I think also feeds into Nancy’s, ‘We don’t do feelings, we don’t do feelings.’

Jace The character of Nancy Campbell, the fearless, unflappable war correspondent so brilliantly played in our series by Academy Award-winning actor Helen Hunt, is inspired by the remarkable and real-life English journalist Clare Hollingworth.

Clare Hollingworth I remember just before the war, the border with Germany was closed. Though it was open to diplomats.

Jace This is Hollingworth, who, as Bowker correctly noted, only recently died in 2017 at age 105. A distinguished British war correspondent, her reporting in 1939 was the first indication the British Foreign Office had of Nazi Germany’s invasion of Poland. Here, Hollingworth describes how she discovered the invasion in a 2011 oral history, sampled here courtesy of the British Imperial War Museums. Hollingworth filed what some have called the “scoop of the century.”

Clare I said to the Consul General, ‘May I borrow your car as well?’ And he said, ‘Yes. Where are you going, old, girl?’ As I’ve said, everyone was ‘Old Girl’ in those days. And I said, ‘I’m going into Germany.’ And he said, ‘Aren’t you a funny old girl?’ and I said, ‘Well, that’s where I’m going.’ I knew the border was open to flagged cars and the Consul General, although British, had a flagged car. I got to the border with Germany, they were a bit surprised to see the Union Jack, but they let me in. And I went in to the nearest town and bought wine and the newspapers and other things you couldn’t get in Poland, but you could get in Germany. And as I was driving back along a road very near to Poland, and it had a steep slope one side, but I was surprised. There was hessian screen to prevent you looking down into the valley. And fortunately for me, as I was driving along, a sudden, strong gust of wind blew the screen away from its moorings and I looked into the valley and saw scores, if not hundreds of tanks lined up, ready to go into Poland.

Jace Much like the fictional Nancy Campbell, Hollingworth really did stumble upon a German convoy along the Polish border, and sped to inform the British Consul General.

Clare I drove on, drove back through the border into Poland, and I said to the Consul General, ‘Thank you for lending me your car.’ He said, ‘Where did you go, old girl?’ I said, ‘I went to Germany.’ He said, ‘Come off it, Where did you go?’ I said, ‘Look, I went into Germany. And if you don’t believe me, you see can see all the things, newspapers and other objects, food and wine, that I bought in Germany,’ And then I said, ‘What is more, I’ve seen the tanks lined up in that valley over there and you should get on the telephone immediately to Warsaw and London,’ which he did. And I got in touch with Hugh Carleton Green, who was my boss, later to be head of the BBC.

Jace Viewers can see the shaky aftermath of Campbell’s — and, consequently, Hollingworth’s — reporting in this first episode of World On Fire.

Nancy The world has averted its eyes to the buildup of German troops along the German-Plish border, and Hitler’s threat to take Danzig by force. The Poles have bicycles. The Germans have tanks. Make no mistake, the Nazi Party is a master of illusion, and the greatest illusion of all is that they are seriously negotiating for peace. This is Nancy Campbell, American Radio International, from Warsaw.

Jace Before this next segment, let’s take a quick break to hear a word from our sponsors…

Clare  I drove the Consul General’s car with the flag flying, over and he had another car with the flag flying. The two of us, with different people and the staff who were trying to escape from, members of this staff, to Krakow. And I remember driving over dried fields, dry plowed fields because the roads were so crowded. All the people were trying to get out. The cars were covered with luggage and, I mean hundreds of thousands did get out. The roads were just packed with people trying to leave.

Nancy You’re gonna to have to marry her aren’t you? That way she gets papers, to travel with you. I know you’ve got a girl back home. But, you know what? Being in love with two girls at the same time? That happens. But you aren’t choosing which girl you love the most right now, Harry. You are choosing whether you save this girl’s life or not. The game just got bigger. Did you?

Jace Hollingworth didn’t follow Campbell’s path directly, however. As she explains here, she travelled with the British Consul General in the chaotic time after the invasion.

Clare Yes, there was enormous chaos. But the embassy were very efficient. And they in the end, I mean it was very, but it was they…I can’t remember the name of the town. But the town, the capital finally moved to a town very near the Russian border, just north of Romania, I’d say, a good two-hours drive north of Romania. And I remember the American Consul General or Ambassador, senior American, went in to China and came back, and said. ‘It’s all over, you know, it’s all over, they’ll be coming in. And we’re going to get out into Romania.’ So we did, went down in to Romania and I remember driving down. And I remember meeting Hugh Carleton Green, in the Romanian border. He was as usual, very helpful. Of course, I had a good story for the paper.

Jace Much like her fictional counterpart, however, Hollingworth was always looking for her next story.

Nancy Along with tens of thousands of Poles, I have fled Warsaw. As I arrived back in Berlin, the loudspeakers announced that England had declared war. People listened then went about their business as before. Poland feels very far away to these people. In his proclamation Herr Hitler, who we know dismisses all reports of aggression as propaganda, said, “Poland has refused my offer of a friendly settlement of our relations as neighbours.” Danzig might not see it that way, and the wartime broadcasting conditions here mean  thatI have to be careful what I say This was Nancy Campbell, American Radio International, from Berlin.

Jace And just as Nancy Campbell continues to report on the growing German conflict from the Nazi capital of Berlin, you can be sure to tune in to MASTERPIECE Studio for interviews and updates from the World on Fire cast and crew.

On the next episode of World on Fire: while British translator Harry Chase is back home in Manchester with the young refugee Jan in tow, his new wife, Kaisa was left behind in Warsaw after sacrificing her own escape to ensure her brother makes it to England.

Jace We’ll speak with actor Zofia Wichłachz about bringing this distinctive young Polish character to life, here on the podcast on April 12.

MASTERPIECE thanks the British Imperial War Museums for the generous use of their Clare Hollingworth oral history recording. For more, feel free to visit IWM.org.uk. 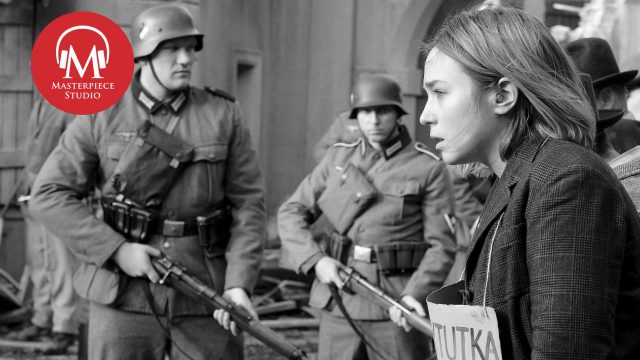 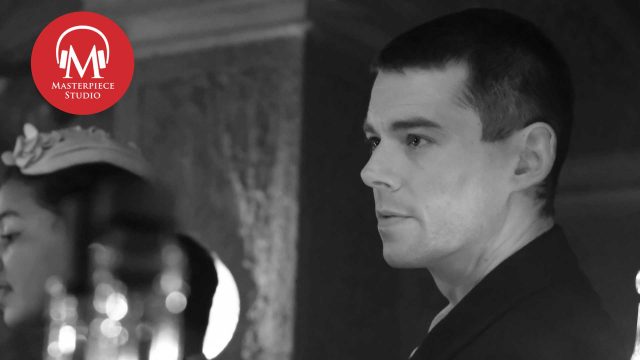 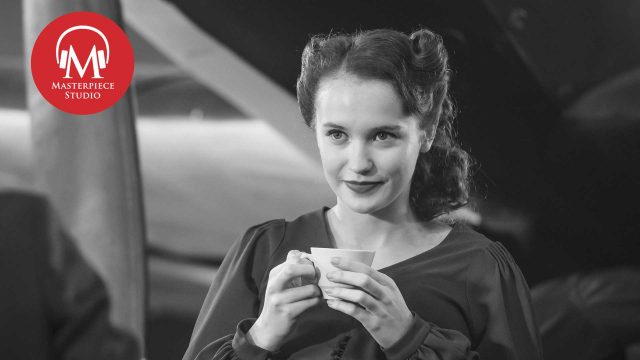 Julia Brown Borrows From Family History For Her Lois Bennett 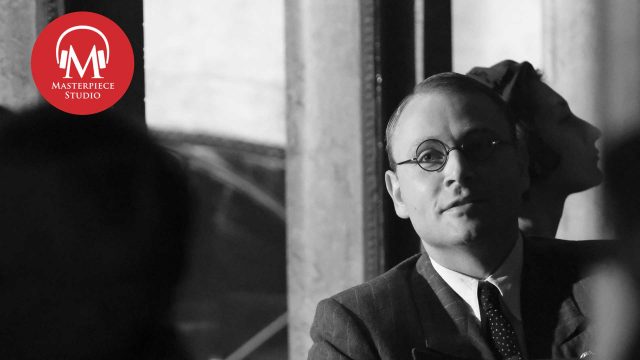 Peter Bowker Paints Intimate Portraits Of A World At War 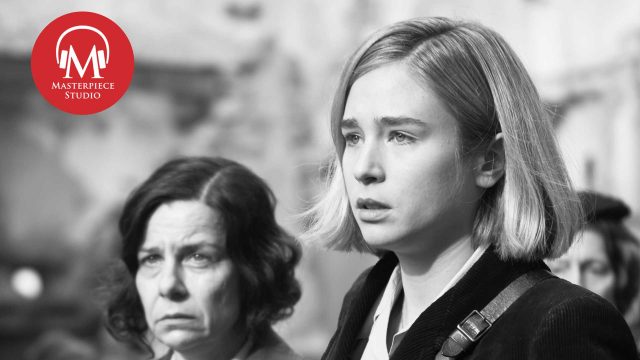