Downton Abbey's series finale was chock-full of moving pronouncements and zingers galore to tickle the funny bone and tug at the heartstrings. But many of this last-ever episode's very best quotes also apply to our beloved show itself! "Would you believe me if I said I couldn't live without you," Bernie beseeches Edith as we beseech Downton Abbey. Like Branson, we "hate goodbyes," and like Thomas, we try to console ourselves, saying that "Even good things must come to an end."

Take a cup o' kindness for Auld Lang Syne with this recap of Downton Abbey's final episode through the very best lines of its iconic characters, then share your favorites with your dearest Downton-loving friends. 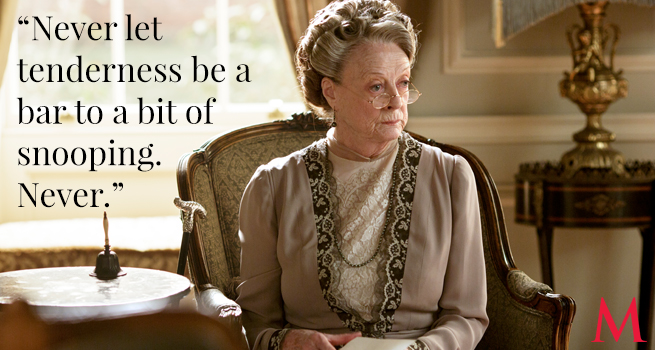 When a peculiar letter from cool little miss Amelia Grey cancels Isobel's tea with Dickie and freezes her out, Violet encourages her friend to investigate the reasons behind the cold shoulder. 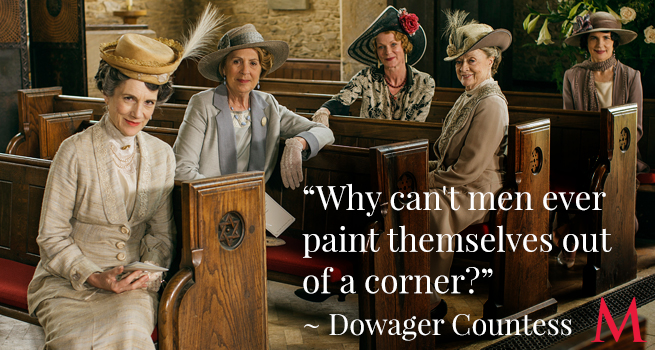 The Dowager asks this universal question as she and Robert discuss the unfortunate Bertie/Edith split and Mary sits by, silent. (If she were anyone else, she'd be squirming!) 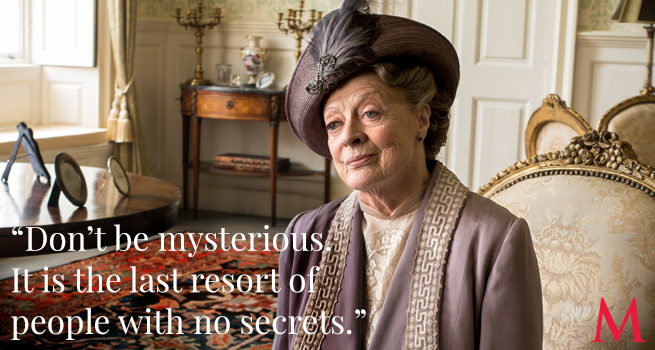 The corner-painting reference has given Mary an idea: A job for Henry? A brooch to lend a servant on her wedding day? Or perhaps a way to bring Bertie and Edith back to together… 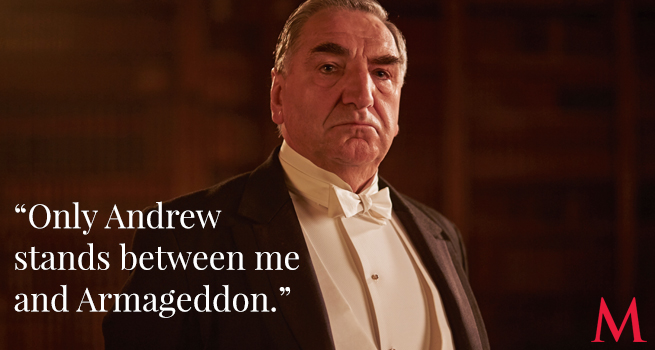 Carson's wish for a leaner servant roster never included the departure of Molesley, who's finally encountered a bit of luck when a schoolteacher retires and Mr. Dawes asks him to take the man's cottage and teach additional classes. 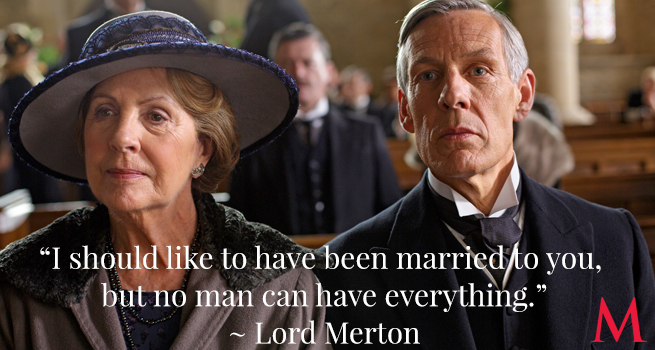 When Isobel visits Dickie at Cavenham, he reveals devastating news: he's been diagnosed with the fatal condition pernicious anemia. 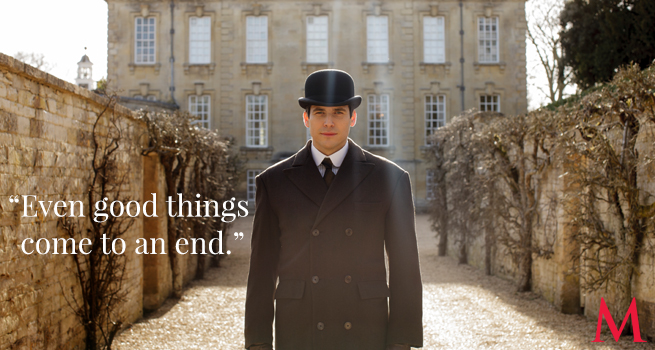 Thomas balances his sorrow at leaving his longtime home with a new lease on life, hoping he may make a fresh start at his new position. Still, it's evident that he will miss Downton more than it will miss him. 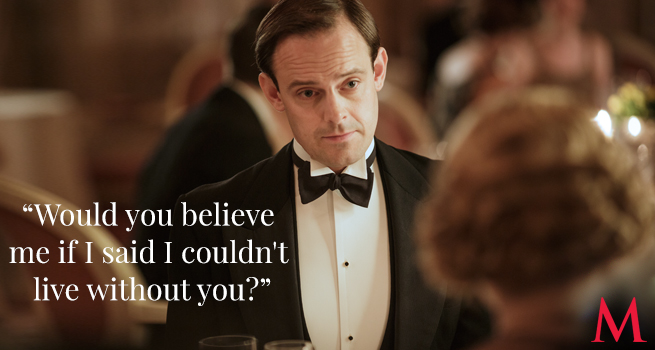 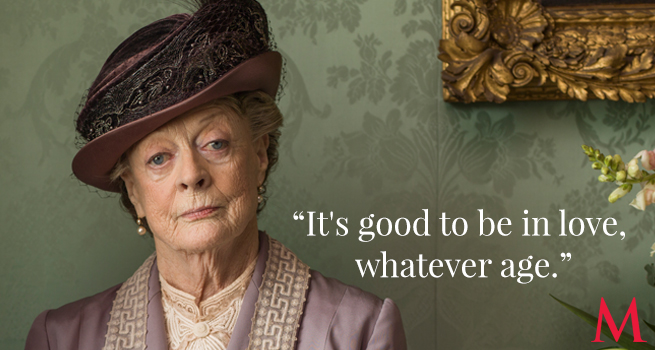 When Isobel admits her sorrow over Dickie's fate, the ever-insightful Dowager Countess reveals herself to be an old softie…which we suspected all along. 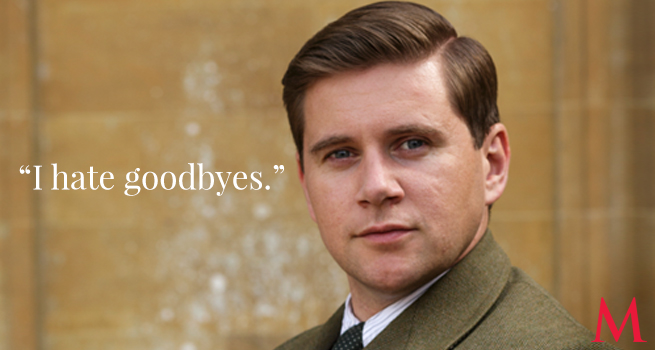 We're right there with you, Tom. 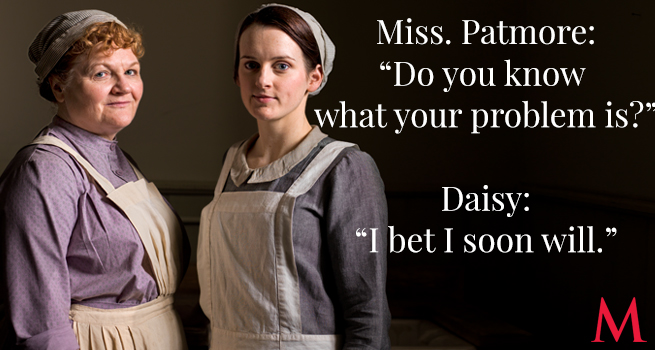 Some savory Mrs. Patmore advice has been cooking, and it's ready to be served: Daisy has no respect for anyone who shows an interest in her. 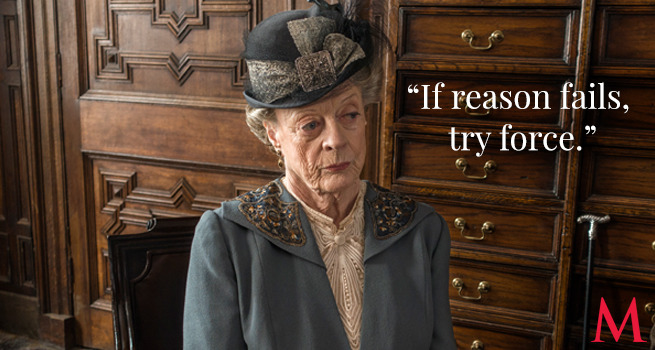 Pity the gold-digger who thinks she can fend off the Dowager Countess, especially when the love of a dear friend is at risk! 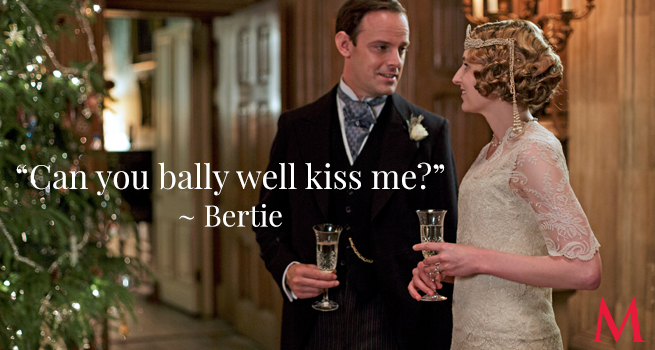 After Mrs. Pelham's surprising announcement of Bertie and Edith's engagement—and her implicit endorsement—Bertie is overcome. A kiss seals the deal! 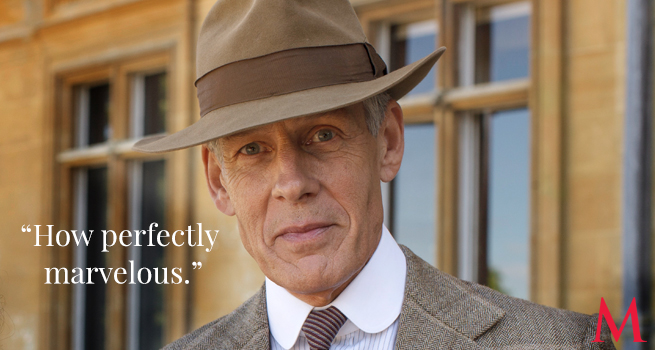 Earnest, endearing Dickie Merton will be released from the "care" of his vile son and his despicable fiancée, and marry his love, Isobel. Huzzah! 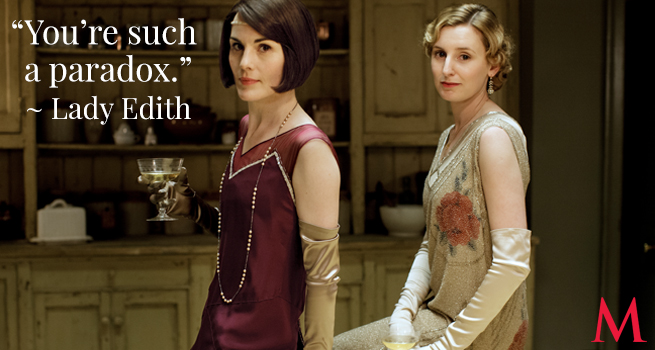 Astonished at Mary's good turn, Edith chooses a markedly different adjective to describe Mary, who secretly initiated her reconciliation with Bertie. When she wonders, "You make me miserable for years, and then you give me back my life," Mary continues to surprise—us all!—suggesting, "Let's try and do a little better in future." 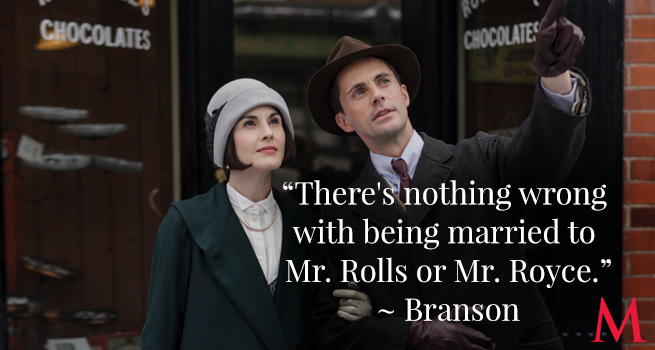 Talbot and Branson Motors, a path to happiness for the eponymous car-lovers, surprises, and surprisingly, delights Lady Mary, who shares news of her pregnancy with a very happy Henry. 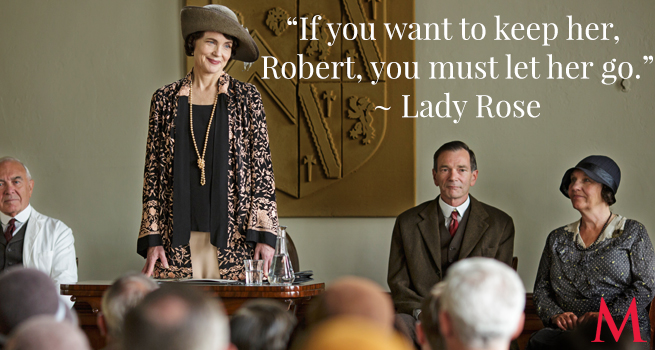 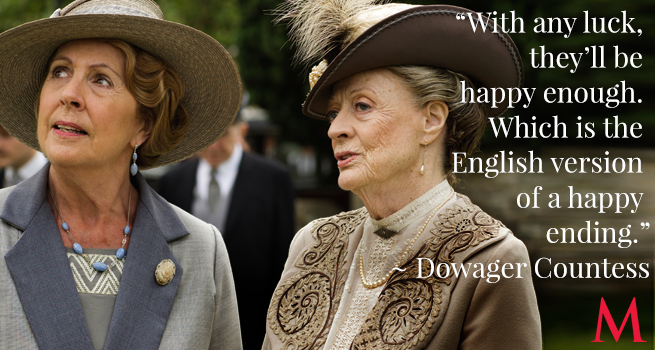 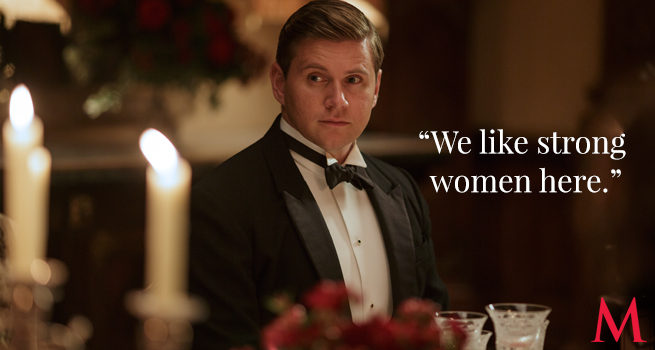 …says Downton's most eligible bachelor to the strong woman who, moments later, catches the bouquet… 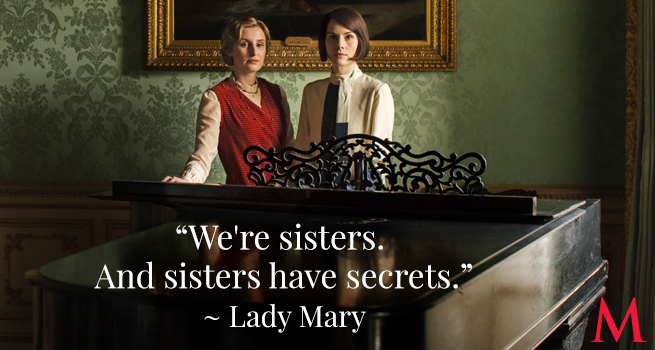 Dare we imagine that any secrets in the future would be shared between the sisters, rather than kept from one another? 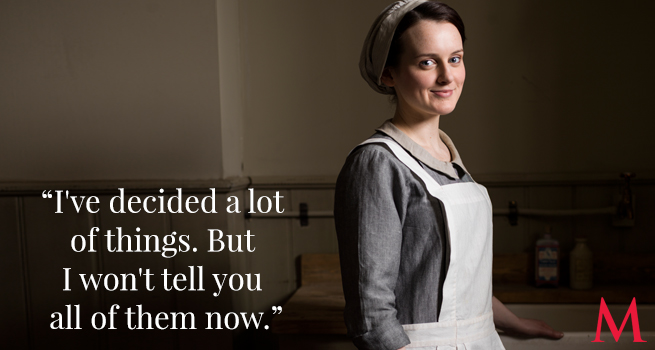 Daisy, sweet on Andy, has finally made her decision: She is moving in with Mr. Mason at Yew Tree Farm. 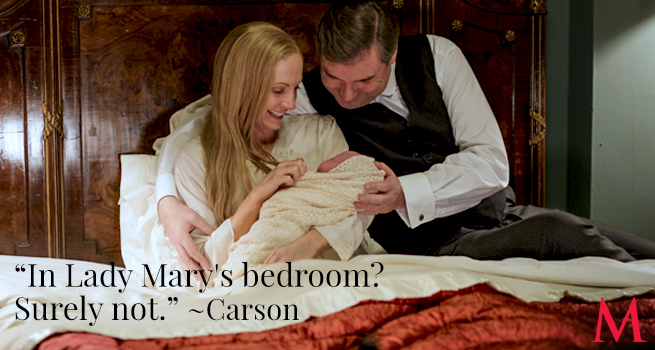 Lady Mary is practically a midwife—in aristocrat terms—when she ushers Anna into her nightgown and bed after the maid's water breaks. 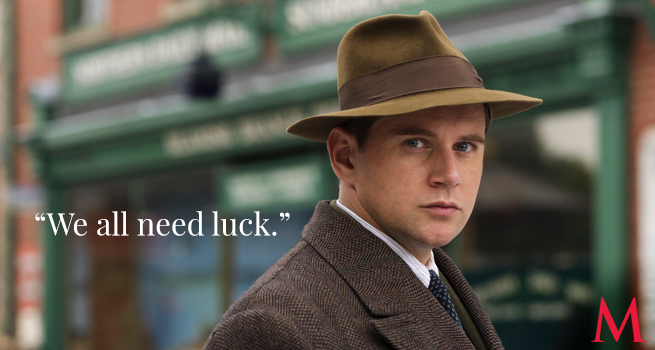 Does anyone else think that Laura Edmonds could use a little "luck of the Irish?" 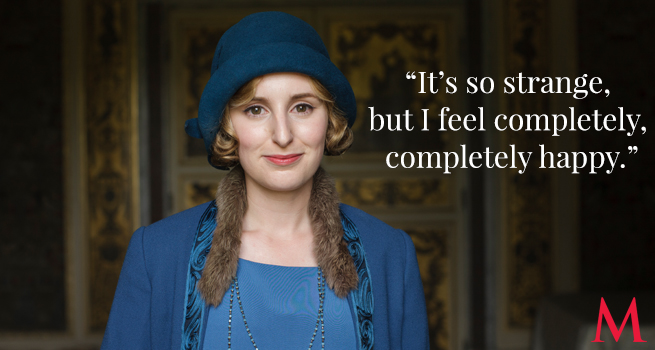 At long last, Edith gets the happy ending she deserves. To Edith and Bertie! Bride and groom! 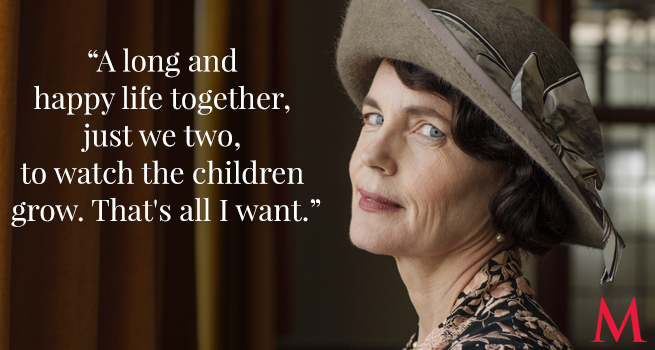 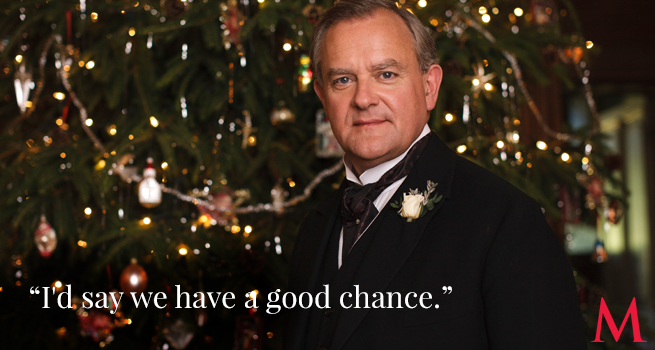 Their ship have indeed come into port, and the future looks promising. Downton Abbey will stand. 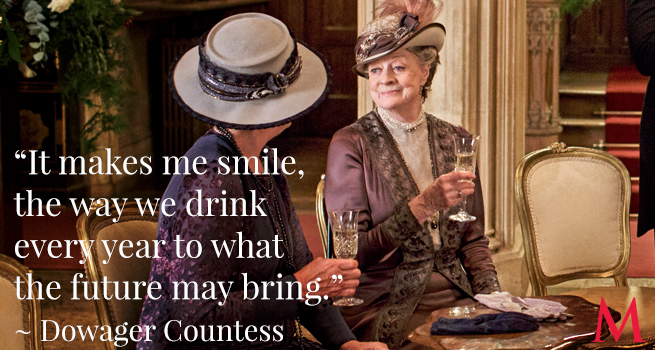 As the chimes strike midnight and Isobel remarks that they're heading for the future, not the past, Violet delivers the final line of Downton Abbey with her perfect blend of pragmatism, wisdom, and irony: "If only we had a choice."