Game Two for the Ice Warriors 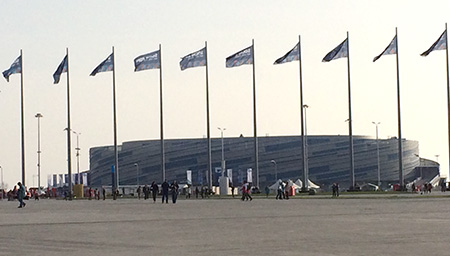 “Shayba” is a great name for a hockey venue: it means “puck” in Russian. In the Olympic Park, the Shayba Hockey Arena is perfectly round, has a flat roof, and is covered in ice blue and tan diagonal streaks – the perfect image of its name. Apparently, “Shaybu!” is also what Russian fans chant to support their team.

But not so far, at least at Team USA’s games. Yesterday, in the USA vs. Italy match, a surprising number of people in the crowd were waving Russia flags but had Italy’s red, white, and green colors painted on their faces and were cheering for Italy. At today’s game against Team Korea, the Russians were yelling, “KO-REE-AAA!!”

But as team captain Andy Yohe told ICE WARRIORS, “As long as the crowd is cheering, we don’t care who they’re cheering for.”