On the same day, 35 miles northwest of London, a very different competition opened.

The Stoke-Mandeville Games for the Paralyzed, held on the grounds of a hospital that treated injured war veterans, featured 16 people – 14 men and 2 women – competing in one sport, archery.

The games were the brainchild of Dr. Ludwig Guttmann, head of the Stoke-Mandeville Hospital’s Spinal Injuries Unit.  Guttmann had realized that enforced, immobile bed rest, the standard practice in spinal injury cases, was hurting his patients.  He experimented with moving the patients, gently turning them over regularly, and was encouraged by the results.  He began programs to strengthen the patients with simple games of ball, then wheelchair polo and basketball, darts, and archery.  Patients lived and thrived, and the idea of competitive sports for people with physical disabilities took hold.

Growth Of The Games 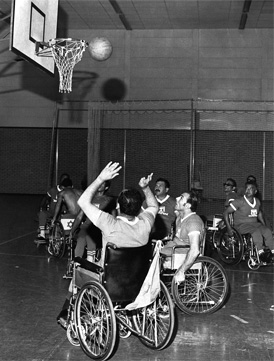 Two years later, the Stoke-Mandeville competition had expanded to sixty competitors, and javelin throwing was included.  By 1954, fourteen nations were represented at Stoke-Mandeville, with athletes from as far away as Australia, Egypt, Pakistan, and Portugal.

And in 1960, 400 athletes with disabilities, from 23 countries, gathered at the Olympic Stadium in Rome, just days after the Olympics had concluded.  They competed in archery, basketball, swimming, fencing, javelin, shot put, club throwing, snooker, swimming, table tennis and the pentathlon.

For more than a decade, Paralympic competition was only held for summer sports.  Then, in 1976 in Sweden, the first Winter Games were held – the first games, also, to feature athletes who were not wheelchair users.  198 athletes from 16 countries competed in alpine and nordic skiing for amputees and visually impaired athletes; ice sledge racing was a demonstration sport.

The first Summer Games of the modern Paralympic era were held in Seoul, South Korea, in 1988. 100,000 attended the Opening Ceremonies, which featured skydivers, thousands of children, and 700 wheelchair dancers.  Over 950 world records were set, with Trischa Zorn of the US winning 12 Gold medals in swimming and setting 9 world records.

The first Winter Games to take place in Olympic venues were held in 1992, in Tignes and Albertsville, France.  Since then, both Winter and Summer Paralympic Games have taken place exactly two weeks after the Olympic Games, in the same arenas and on the same tracks and slopes.

The Spark of Fire 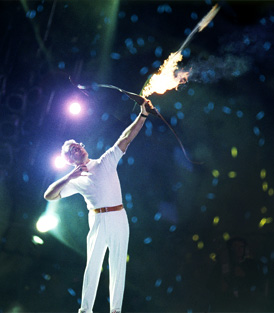 Stephen Hawking, the renowned physicist with disabilities due to ALS, spoke at the Opening Ceremonies of the 1992 Barcelona Games.  “Each one has within us the spark of fire, a creative touch.”  An archer lifted a flaming arrow over the Paralympic cauldron, igniting the Paralympic torch for the Summer Games.

Team USA took gold for the first time in sled hockey in the Salt Lake City Games, 2002, the first Winter Games held in the Americas.  The US placed first in the medal count, taking 43 medals. 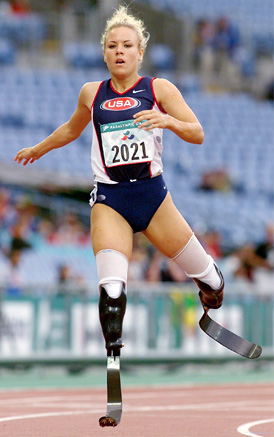 Other adaptive sports equipment has also changed radically.  Wood and steel has been replaced by titanium and graphite.  Microchips are embedded for balance and stability.  Prosthetics are computer-fitted to the athlete’s body.

The results, in Summer sports, are racing times that compete with able-bodied athletes’: in 2012, for the first time, South African Paralympian Oscar Pistorius, running on carbon fiber prosthetics called “cheetahs” and called “the fastest man on no legs,” competed in both the Olympics and the Paralympics.

Winter equipment has also evolved rapidly.  The first sit-skis were so heavy, athletes could not take on moguls or steep slopes. Fiberglass and polyester have radically changed the weight of the skis and widened the athletes’ opportunities.  Shock absorbers in sit-skis also allow skiers to tackle tough terrain at high speeds. Outrigger skis – ski poles with small skis on the ends – help Paralympic skiers balance, turn, control their speed and stop, and also help standing Paralympic skiers get on ski lifts.

From the Archives: Paralympic Greats