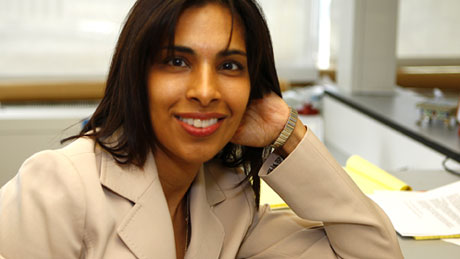 (Program not available for streaming.) Biomedical engineer Sangeeta Bhatia comes from a line of enterprising women—her mother was one of the first women in India to receive an M.B.A. With her own Ph.D. and M.D., Bhatia is a tissue engineer at MIT. She builds unique microlivers to study disease and test drugs, and her work may someday lead to artificial organs for transplant.

While a student at MIT, Bhatia started an outreach program to get girls into labs—wearing spacesuits, working with lasers, and loving science. Now, as a mother, Bhatia is encouraging her two young daughters to see science as a creative, exciting endeavor.

NEIL DeGRASSE TYSON: Sometimes, if something goes terribly wrong with one of your organs—let's say your liver stops working—surgeons might be able to replace it and help you survive.

But for this kind of transplant to work, you need a new liver standing by, one that somebody just donated. Internal organs like this have no shelf-life and they're hard to find. But what if we could manufacture livers, so that you could just order up a new one if you needed it?

Well, in this episode's profile, we meet a bioengineer who's trying to do just that, by figuring out how to build functioning livers in the lab, on demand.

SANGEETA BHATIA: I don't cook at all. My husband likes to say that I'm very good at "preparing" things, which means, like, heating them up. I don't keep my car very clean; my car is a mess. Right now, it smells like a dead animal.

NEIL DeGRASSE TYSON: Sangeeta Bhatia seems a lot like the rest of us.

SANGEETA BHATIA: I'd like it to be that if you met me socially, you wouldn't necessarily know what I did, until I told you.

NEIL DeGRASSE TYSON: What this M.I.T. doctor and bioengineer has done isn't exactly normal. She was a pioneer in getting liver cells to function outside the human body, taking a major step toward developing an artificial liver.

Her problem-solving potential became obvious at an early age, when she performed surgery on the family's broken answering machine.

SANGEETA BHATIA: I got out the screwdriver, and took it apart, and laid all the pieces on the table, and tried to figure out what was broken. And I found something that looked amiss and fixed it. And lo and behold, the answering machine worked again. There were actually some parts left over that were supposed to belong on the inside, but it was working anyway, so I called it a day.

NEIL DeGRASSE TYSON: Sangeeta's parents emigrated from India, her father, an engineer, and her mother, one of the first female M.B.A.s in India.

SANGEETA BHATIA: My mom was, sort of, ahead of her time. She was a really independent, strong woman. If I look back on it now, she arranged her life so that she could work and contribute and still be home for us when we came home from classes.

When I was in high school, I, even like now, had a very full life. So I've always had a lot of things going on. I had a lot of really hard classes, I was twirling baton, I was dancing. I think I never really thought about the fact that it was a lot of work. I just thought about how I could do all the things I wanted to do.

NEIL DeGRASSE TYSON: And all these activities helped her to deal with the stresses of schoolwork.

SANGEETA BHATIA: You can't worry about the exam that's the next day, because you're focusing, in the moment, on learning this move. And I think what emerged from it was this, this, probably, more balanced version of me.

NEIL DeGRASSE TYSON: But after arriving at M.I.T., the harsh reality of a highly competitive, around-the-clock-work culture hit hard.

SANGEETA BHATIA: I felt, in the beginning, really out of my league, like I could never possibly work enough hours in the day. And I came to the lab one Saturday night at 3 a.m., and I noticed the lab was full of people. And I had this moment where I realized that I didn't want to be there every Saturday night at three in the morning.

Science is a marathon, and finding ways to protect part of yourself is an important part of success in the marathon.

NEIL DeGRASSE TYSON: In Sangeeta's marathon, she got a Ph.D. in biomedical engineering from M.I.T. and an M.D. from Harvard. And in the process, she applied the power of computer chip technology to tackle one of the human body's most complicated organs.

SANGEETA BHATIA: I fell in love with the liver, sort of by accident. When I was a first-year graduate student, my advisor, Mehmet Toner, had what seemed like this fascinating project, which was to make an artificial liver. It would be an off-the-shelf transplant that you could give a patient, that didn't have to come from another dying patient.

NEIL DeGRASSE TYSON: The first step toward making this artificial liver was to take liver cells from a real liver, and get them to function outside the human body, in the lab. The problem was, as soon as the liver cells were removed from the body, they immediately began to die.

MEHMET TONER: As soon as we take liver cells out of the body, put it in a laboratory environment, all bets are off. They don't function, they are not happy. And Sangeeta's problem was to tackle that.

NEIL DeGRASSE TYSON: She saw that inside the body, the liver cells branched off into stripes. Since cells communicate with one other through chemical signals, this striped pattern could be crucial.

SANGEETA BHATIA: The hypothesis was tissue architecture should matter, but no one had ever done the experiment to show that that was the case.

NEIL DeGRASSE TYSON: The challenge now was to get the tiny liver cells to obediently line up on a slide, in the lab, exactly as they do in the human body.

Combining her backgrounds in biology and engineering, Sangeeta turned to the technology used in producing the tiny patterns on computer chips.

SANGEETA BHATIA: If you've ever seen a picture of a computer chip, and it has all these networks of wires that make circuits—that technology that makes those patterns works by shining light on a surface.

NEIL DeGRASSE TYSON: Using the same technique, creating a chemical reaction with light to etch striped lines onto glass slides, she hoped to corral the liver cells into formation.

SANGEETA BHATIA: For about a year I tried this. Turned out, for my liver cells, nothing actually worked. At one point in the process, I started to think I was losing my mind, because the experiment was, you take this piece of glass that's clear, and you shine light on it, and it's still clear. And you dip it in a bunch of clear solutions, and you pour cells on it, and at the end they're supposed to organize. After you do this about a thousand times, and you never see organized cells, you start to the think that you're insane.

NEIL DeGRASSE TYSON: After laboring over her experiment for a year, one day, everything changed.

SANGEETA BHATIA: The moment that I looked into the microscope and saw the...that this thing that I had invented in my head had actually come to fruition was amazing.

NEIL DeGRASSE TYSON: With the cells lined up properly, their communication system was working. Not only were the micro-livers functioning, they were now living for an unprecedented six weeks, outside of the human body.

MEHMET TONER: It enhanced our understanding of liver biology significantly. She figured out that if you put liver cells on a surface in a certain, specific geometric configuration, bingo! Liver cells start functioning.

NEIL DeGRASSE TYSON: Soon, these micro-livers could be used to test experimental vaccines for malaria. And Sangeeta hopes that within her lifetime, she can create a functioning, artificial liver, to save patients with liver failure. But to do this, she needs a lot of help.

SANGEETA BHATIA: I have a ton of support. I have a babysitter at home, an assistant at work, and somebody who helps run the lab, and a husband that's supportive and parents that are nearby. So, it sort of takes a village to help me run my life.

NEIL DeGRASSE TYSON: It's this team of people that gives her more time to spend with her two daughters. And she makes certain that her daughters have the same kind of positive role models that she had growing up.

And in her family, Barbie(TM) is not one of them.

SANGEETA BHATIA: Barbie, in our house, is "that doll that Mommy doesn't like." Barbie really represents the exaggerated figure, the "I don't like math." And so, when I had girls, I really didn't want Barbies in the house. I didn't want that body image, I didn't want that focus on materialism—I just didn't, you know, like anything about Barbie.

NEIL DeGRASSE TYSON: Instead, she gave her daughters a Marie Curie doll.

SANGEETA BHATIA: The cool thing about Marie Curie is that she was, of course, the first Nobel Prize-winning woman. She was also the mother of two little girls. And her older daughter went on to win the Nobel Prize herself.

JAGESH SHAH: Oh, my goodness, that went down really fast.

SANGEETA BHATIA: Right to the bottom. Which one is denser?

SANGEETA BHATIA: I don't think that science is necessarily a career for everyone. I want to share with them a curiosity for the way the world works, and I think whatever they want to be, they should be.

SANGEETA BHATIA'S DAUGHTER: It's getting sparkly.

NEIL DeGRASSE TYSON: And it's not just her own daughters that she wants to inspire.

SANGEETA BHATIA: Keys to Empowering Youth was an outreach organization that I helped to start when I was in graduate school.

ALICE CHEN: We see these young girls come in and get so excited to put on lab coats and lab goggles and work with the equipment. And I think that it does make them think about choosing science and engineering as a career, and at least shows them that they have that option.

ALICE CHEN: Once, when I was at Sangeeta's house, I was sitting with her at her dining room table, and I said, "Wow, this is place is lovely. I can imagine you working here." And she said, "Why? I don't work all the time at home. I have a life. I have my kids." I think that she just always reminds us that life is more than just work.

Downside? No Fantastic Voyage for Sangeeta.