Mystery of the Gakkel Ridge 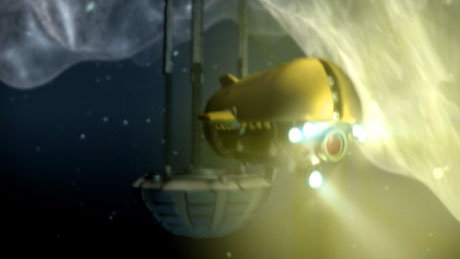 (Program not available for streaming.) Stretching for more than a thousand miles at the bottom of the Arctic Ocean, Gakkel Ridge is an eerie undersea landscape of volcanoes, hydrothermal plumes, and exotic creatures. But while Gakkel Ridge may be unique on Earth, it bears an enticing resemblance to Europa, one of Jupiter's many moons. Could exploring Gakkel bring us one step closer to finding out if Europa might host life?

Mystery of The Gakkel Ridge

NEIL DeGRASSE TYSON: As we explore strange new worlds, seek out new life, the creatures we come across might be so bizarre, thriving in environments totally different from ours, that we could have trouble even recognizing they're alive.

Luckily, there's an exotic world right here in our very own solar system, and as Correspondent Ziya Tong tells us, it might be the perfect spot for us to boldly go.

ZIYA TONG (Correspondent): This is the top of the world, the Arctic Ocean, one of the most remote places on Earth, pretty alien for humans.

But these scientists trekked to this icy badlands, because they're sending vehicles two to three miles under the surface to the Gakkel, an underwater ridge system that may hold clues to the secrets of life.

The truth is we have fantastic diversity of life on our seafloor, and life may have arisen from our seafloor. So I'm looking at how life has evolved in our oceans, particularly in the deep sea.

ZIYA TONG: But the strange thing about this particular exploration is that it's not just about life on this planet. It's also about the search for life on Europa.

JOHN RUMMEL (Astrobiologist): Europa is a moon of Jupiter. It's one of the four satellites of Jupiter discovered by Galileo back in the 1600s.

ZIYA TONG: We humans have been wondering for a very long time: "Is there life out there?"

JOHN RUMMEL: Well, I think that it takes a really big ego to not consider the possibility.

ZIYA TONG: But why look for life on Europa?

Because of pictures sent back by two NASA vehicles, Voyager and Galileo; very intriguing pictures.

JOHN RUMMEL: We see this cunning little moon of Jupiter, called Europa, about the same size as the earth's moon, that's got an icy surface and probably an ocean twice as big as all the earth's oceans, underneath that ice.

ZIYA TONG: Why's that such a big deal?

Because the search for life begins with water.

TIMOTHY SHANK: We know that there are certain essential elements that you have to have for life to exist: water, rock, and a heat source.

ZIYA TONG: The heat source interacts with compounds in water and rock.

JOHN RUMMEL: The major components that are required for life are carbon, hydrogen, nitrogen, oxygen, phosphorous and sulphur. Those are the big important ones. And until we can look for the presence of all these, then we don't know whether or not Europa actually can have life, based on our current understanding. But it's a very attractive target.

TIMOTHY SHANK: I see no reason why there wouldn't be life on Europa. The trick is how you're going to get there and probe for that life.

PETER GIRGUIS (Marine Biologist, Harvard University): And if we want to go look for life there, we're going to have to develop a new suite of technologies.

Space scientists, in fact, are now turning to oceanographers and saying, "Hey, how do you study underwater hot springs?" Because there may be some on Europa.

ZIYA TONG: So NASA helps support expeditions on Earth that prepare us, and the equipment, to explore Europa. And it turns out, Gakkel Ridge is just the spot.

TIMOTHY SHANK: The most analogous place on our own planet is the Arctic Ocean, the Gakkel Ridge.

JOHN RUMMEL: Gakkel Ridge is very interesting. It's a place sealed off, effectively, from the rest of the ocean system for millions of years.

TIMOTHY SHANK: The continents had moved around to form a basin, basically. And so, whatever's been evolving there has been evolving in isolation for the last 32 million years.

ZIYA TONG: Scientists went to Gakkel Ridge and deployed vehicles to take images and samples two to three miles under the surface.

Part of the scientist's job is to uncover the challenges. Tim and the team uncovered the challenges, like communicating with the autonomous underwater vehicles and working with the ice, which posed daunting obstacles.

TIMOTHY SHANK: The ice can close in on you very rapidly. You could spend hours trying to predict where it's going to go. You're never really sure.

PETER GIRGUIS: How do you tell a vehicle to go explore underneath an ice cap and then maybe collect some samples and come home? I mean that's not an easy task.

ZIYA TONG: So what did they end up finding?

TIMOTHY SHANK: One thing we did find was a, was a new species of octopus, a sea cucumber or some sort of a worm. We found skeletons of a sponge that may be a new species. We found three new volcanoes we didn't know were there before, and the lava on them is very fresh, like they've recently erupted.

ZIYA TONG: And microbes, lots of microbes. Like moss covering a forest floor.

TIMOTHY SHANK: The preliminary data analysis is telling us those microbes are closely related to the bacteria that form the trunk of the evolutionary tree of life. They're unlike anything we've seen before.

TIMOTHY SHANK: If someone told me, "We went to Europa. We got this footage. Take a look at this." I'd go "Wow."

I wouldn't be surprised to see those kinds of microbial communities.

We're working on a project now to develop sensors to be able to sense life in a Europan ocean. Will animals have blood on Europa? Who knows? We're trying to figure out: can we sense blood? Can we sense carbon? Can we sense the amino acids that might be there for primordial life? It's amazing stuff.

ZIYA TONG: But exactly what we'll find there is a mystery, and that's half the fun.

JOHN RUMMEL: We get to learn about this planet while we're preparing to study others. I think that it's going to be a very interesting ride, one way or the other.

Ya Ya for short; Soviet explorer and polar geographer. In 1948, he predicted the existence and location of an underwater Arctic mountain range. He was right. The "Gakkel Ridge" was found in 1969.

Mystery of The Gakkel Ridge