A climatologist struggles to save ancient history preserved in ice that is rapidly melting. Airing July 28, 2009 at 9 pm on PBS Aired July 28, 2009 on PBS 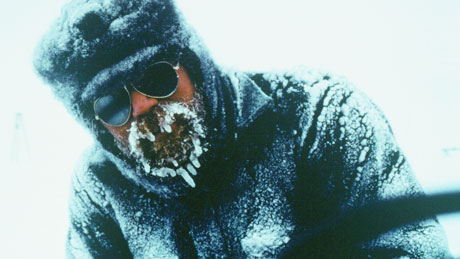 (Program not available for streaming.) For more than 30 years, glaciologist Lonnie Thompson has been collecting ice. Why? Because cores of ice from high mountain glaciers contain significant data about past climate change, which can be useful in helping us combat current climate change. All told, Thompson has worked in 15 countries on five continents, helping to build an invaluable archive dating back 700,000 years.

NEIL DeGRASSE TYSON: Most people, if they're packing for a trip to the tropics, they're thinking, "Beach, palm trees...so I'll bring the bathing suit, the flip flops." But guess what? The tropics are more than beaches. In fact, they have glaciers, ice, covering huge mountain ranges.

In this episode's profile, we meet a scientist who loves the tropics, but whenever he goes, he's packing a parka and a giant ice pick.

Why would this 60-year old scientist put himself through this: 33 years of grueling treks, punishing altitudes and frigid temperatures?

MARK BOWEN (Author, Thin Ice: Unlocking the Secrets of Climate in the World's Highest Mountains): Lonnie has spent more time above 18,000 feet than any human in history.

NEIL DeGRASSE TYSON: Is he a thrill-seeker?

LONNIE THOMPSON (The Ohio State University): Uh, no, I'm very much not a thrill-seeker.

NEIL DeGRASSE TYSON: So why has he scaled remote tropical mountains in 15 countries on five continents for more than 30 years? Glaciologist Lonnie Thompson is after this: ice cores.

RAY BRADLEY (University of Massachusetts Climate System Research Center): Lonnie reminds me of Clark Kent, that Superman character, where, at home, he's mild-mannered, and then, suddenly, he learns about an ice cap that has an interesting record, and he tears off his shirt, and he suddenly becomes "Tropical Ice Core Man."

NEIL DeGRASSE TYSON: Lonnie makes these harrowing treks because he knows that the ice cores he drills contain significant data about climate change.

LONNIE THOMPSON: That's really what I like about ice. There are so many different questions that you can address by reading the history that is recorded in the ice fields of the world. Unfortunately, that history is melting in today's world.

NEIL DeGRASSE TYSON: Which is why Lonnie is a man with a mission. Global warming is melting glaciers around this planet at an accelerating pace. That is exactly what's happening to this ice cap in Peru, the place where Lonnie's career really took off.

It was here, at the Quelccaya Ice Cap, in the 1970s, that Lonnie began to pioneer a new scientific discipline: tropical alpine paleoclimatology, the study of climate history using tropical mountain glaciers.

As a young scientist, it occurred to Lonnie that tropical ice cores might provide climate information the poles could not.

LONNIE THOMPSON: We need to understand some other processes, like El Niíños and monsoons. You know, you can't, you wouldn't go to the polar regions to capture those, those are tropical phenomenon.

NEIL DeGRASSE TYSON: With Quelccaya and his other glaciers disappearing fast, Lonnie's archive at Ohio State University may soon be the only place to find tropical ice.

He and his team have amassed four miles of it, an archive of global climate history dating back 700,000 years. It almost looks like reading tea leaves, but, in fact, the ice is chock full of microscopic data for Lonnie's team to analyze.

Annual layers of ice collect dust particles, bubbles of gas, bacteria, pollen and other clues. From this information, the team forms a picture of a slice in time.

When they compare records from around the world, from long before the Vikings through the Industrial Age, they can create a timeline that tells the climate story of our planet.

LONNIE THOMPSON: And it's amazing that the ice is such a fantastic recorder of these, that you can actually see the increase in things like sulfate rising through industrialization. But you can also see the passage of the Clean Air Act in 1970 and the reduction in sulfate, after that.

NEIL DeGRASSE TYSON: Though the stakes may be higher today, Lonnie's fascination with the earth's climate began when he was just a kid in Gassaway, West Virginia. One of Lonnie's science teachers loaned him equipment to build a weather station, which he set up in his sister's horse barn.

REGINA THOMPSON-BOBO (Lonnie Thompson's Daughter): I think, well, "What was I doing at that age?" You know? Listening to music and thinking about M.T.V., and I just picture my dad, like, in the top of a barn figuring out what the weather is going to be, I think it's pretty neat.

LONNIE THOMPSON: I ran an experiment when I was in high school, how long I could stay up without sleep. Because there were stories that if you stayed up, you know, past 70 hours, you'd start seeing pink elephants and things like that. And it wasn't true, but I tried it out to find out.

NEIL DeGRASSE TYSON: Lonnie's mom and dad were insistent that he do something they never could: go on to college and graduate school.

FRANCES THOMPSON (Lonnie Thompson's mother): You have to have hope. There was a lot of times our meals were pretty skimpy, you know? And I never allowed them to complain. I said, "Now, don't say anything. It could be worse." Although, at the moment, I didn't know how it could be worse.

NEIL DeGRASSE TYSON: Lonnie worked four jobs through high school, an effort that became more important after his Dad died from a heart ailment. Just two years later, he lost his sister to a car accident.

LONNIE THOMPSON: It really brought home, at an early age, the fact that we have no guarantee of how long anyone's life will last. If you want to do something, you need to get on with it, because the clock's ticking.

ELLEN MOSLEY-THOMPSON (The Ohio State University): Well, I thought he was attractive. He seemed very serious. And then after we met, I found out that he had lots of humor, and we liked a lot of similar things like scary stories, scary movies.

NEIL DeGRASSE TYSON: In the 1970s, Lonnie and Ellen embarked upon the then-new study of ice cores to understand climate. Didn't take long for Lonnie to run up against a defining moment, right before one of his first presentations to peers.

LONNIE THOMPSON: One of these fellows took me aside and told me that if I got up there and told them that I could date ice core using dust, that my career was finished and done for. And it really worried me, because I respected this fellow. And I just finally said, well, "I'm pretty young, so I'm going to say what I think, and we'll let the chips fall as they may."

NEIL DeGRASSE TYSON: Scientists assumed tropical ice cores wouldn't give reliable data, because heat would melt the glacial surface, and the fresh water would trickle down and contaminate the ice layers beneath. Skeptics also thought these tropical sites were too remote and inhospitable.

LONNIE THOMPSON: So, I'm really naive about how I might do this. Probably, that worked in my favor, because I didn't know what I was getting into.

NEIL DeGRASSE TYSON: Finally, the National Science Foundation took a chance on Lonnie's plan. He and Ellen put together an international team of committed scientists and support staff. In 1979, with Lonnie's reputation on the line, the team headed to Peru.

MARK BOWEN: They went through this amazing experience in the back country, for three months. They ran out of food twice, they were eating, you know soup, made of orange peels and the old coca leaves; it was very risky in many ways. And then they had this miraculous success.

NEIL DeGRASSE TYSON: Lonnie's efforts reveal that this glacier, on Quelccaya, is typical of the tropics. It's receding, and his team has documented that process over decades.

When Lonnie started, there was no lake here.

LONNIE THOMPSON: In the first 15 years it was retreating at about six meters per year, and the last 15 years, it's been over 60 meters per year. So that's a tenfold increase in the rate of which the ice is being lost in this valley.

NEIL DeGRASSE TYSON: But his research is not all that's put Lonnie on the map. It's his ability to see and communicate the implications of his findings.

LONNIE THOMPSON: When you go into the tropics, you've got 70 percent of the 6.5 billion people living on the planet living there. And when you go to a country like Peru, where 80 percent of its water comes from the glaciers that produces the power for the country, the loss of that archive becomes a human issue. That water is also used for irrigation, municipal water supplies, and it's all disappearing.

It's not so much what we know—though that's going to be very important in dealing with these problems—but it is more the human spirit that we can when we—at least when we have to—work together to do something.

NEIL DeGRASSE TYSON: Now, four decades after his start, Lonnie has been given the highest recognition for his lifetime of achievement.

NEIL DeGRASSE TYSON: He's been awarded the National Medal of Science in acknowledgement of his research and his public impact.

LONNIE THOMPSON: I go back, and I think about my childhood growing up in West Virginia. And you think about all the choices that you make along the road that take you in a certain direction, even if you had known, you know, how is it possible that you would make all these particular choices? Sometimes when I look at it, I think it's kind of a miracle.

On Screen Text: Lonnie has about as much ice in his freezer as there is on the Rockefeller Plaza ice rink. Thing is, he had to get it down from here.