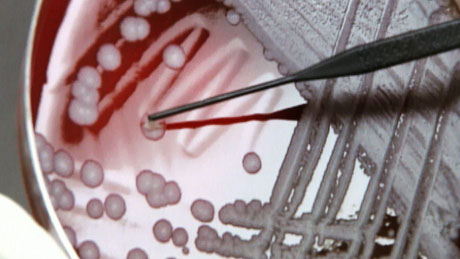 (Program not available for streaming.) Amazingly, researchers were able to trace the strain of anthrax used in the deadly 2001 attacks to its source flask. How? By relying on a revolutionary technique that highlights key mutations in a microbial strain. In the future, such genetic fingerprinting can help pinpoint source microbes responsible for everything from food-borne poisonings to deadly health epidemics.

NEIL DeGRASSE TYSON: When a murder is committed, one of the key ways to link the culprit with the crime is by tracing the murder weapon. For instance, every gun leaves a unique signature on the bullets it fires. Match the lethal bullet to the gun, you might find your murderer.

But what if the murder weapon isn't a bullet, but a tiny microbe, invisible to the naked eye, a bacterium? How would you trace it to its source?

That was the challenge facing the F.B.I., in 2001, when they saw their first real case of bioterrorism.

And, as correspondent Peter Standring reports, even microbes can leave telltale signs of their origin. But you've got to look awfully closely to see them, all the way down to single letters of their D.N.A.

PETER STANDRING (Correspondent): From the outside, this could be just another science building at Northern Arizona University. The inside is another story.

You don't get in here without one of these suits, and a damn good reason. You might be studying, for instance, how plague spreads through colonies of prairie dogs, or how one of the most infectious bacterium in the world, Coxiella burnetii, gives rise to debilitating Q fever.

As for our excuse for being here, it's to tell the story of how scientists, in this lab and across the country, participated in one of the most extensive criminal investigations ever, and, in the process, not only solved a mystery, but helped launch a new kind of science: "microbial forensics."

Our story begins just after 9/11, with the wreckage at Ground Zero still fresh and Americans confronting the possibility they are under attack again.

Evidence came first from a local hospital in Boca Raton, Florida. A photo editor of a tabloid newspaper, Robert Stevens, was dying from inhalation anthrax. He might have contracted it naturally; found in soil, anthrax, a spore-forming bacterium will, on occasion, infect a human. But it has also been turned into a deadly biological weapon, and Stevens had received a letter with a strange powder—facts which brought in the FBI.

THOMAS DELLAFERA (U.S. Postal Inspection Service): When Mr. Stevens turned up sick, in late September, early October, there was concern, certainly, that he had anthrax, but on the tails of the 9/11 attacks, the radar antennas were up and investigators were monitoring that situation.

PETER STANDRING: The F.B.I. rushed anthrax from Stevens's body to biologist Paul Keim at Northern Arizona University. Two years earlier, Keim had invented a test to distinguish one strain of anthrax from another.

PAUL KEIM (Northern Arizona University): So my laboratory and my research program had been focusing on anthrax for about 10 years prior to the attacks in 2001. We were the experts on anthrax types, and we had collections of anthrax from all around the world.

PETER STANDRING: Keim set out to match the anthrax killing Stevens with one of the 88 strains in his collection. As he compared fragments of D.N.A. for eight genetic markers, one strain stood out.

RESEARCHER: As you can tell, for each one of these markers, they line up exactly all the way across.

PAUL KEIM: And what we found, of course, was that this strain, this type of anthrax, was known to be a highly virulent strain being used by the U.S. Army for vaccine studies. And it was called the Ames strain.

PETER STANDRING: Isolated from a Texas cow, in 1981, the strain had been sent to Fort Detrick, Maryland, home of the U.S. Army Medical Research Institute of Infectious Disease. But it didn't stay at USAMRIID. Researchers, intrigued by its virulence, passed it from lab to lab,

which made a lab the most likely source of Stevens's infection.

ALAN ZELICOFF: And for people who study the biological weapons problem, the first thought that most of us had was that this was likely a state-sponsored intentional effort to cause harm, in an already-chaotic situation, in the United States.

PETER STANDRING: That suspicion grew as four more letters laced with anthrax turned up at the New York Post, NBC's New York headquarters and the U.S. Senate. The enclosed notes seemed to leave no question about their origins.

By late November, 22 people had been infected; five were dead.

It seemed certain terrorists had acquired anthrax, weaponized to disperse easily. But from where? We might never have known, except for one crucial development.

Now, if you think back to those dark days in 2001, you may recall that the anthrax attacks and 9/11 weren't the only events making headlines. In fact, a huge scientific achievement, only recently considered impossible, was shining just over the horizon.

Scientists stood on the verge of reading the entire human genetic code or genome, three billion letters of D.N.A., represented here by As, Cs, Gs and Ts. Together, these four chemical letters spell out instructions for making every living thing.

Since the D.N.A. of other species was also being read, the F.B.I. began to wonder if the new science of genomics might hold the key to the anthrax mystery.

They approached The Institute for Genomic Research, in Rockville, Maryland. Known as TIGR, the institute had already decoded the D.N.A. of several microbes.

PETER STANDRING: Never before had two entire genomes of a species been compared at every unit of their D.N.A. It meant matching up five million chemical letters, over 5,000 genes. The hope was that the Ames strain had mutated as it passed from lab to lab, and those mutations could be used to identify where the attack anthrax had come from.

While TIGR went to work, the F.B.I. began to collect samples from all the labs working with Ames anthrax.

THOMAS DELLAFERA: We went to the C.D.C. to identify all the laboratories that were authorized to work with pathogens; we went to publications to identify individuals who had worked with anthrax. At some point in early 2002, we'd identified a total of roughly 99 labs, worked our way down to where we ended up with 16 domestic labs and three foreign labs.

After months of work, investigators at TIGR could finally compare the two Ames genomes: the original sample from the cow and the anthrax used in the attacks.

JACQUES RAVEL (University of Maryland School of Medicine, Institute for Genome Sciences): So, to our disappointment, when we finished those two genomes—a quarter million dollars spent on each one—and we just did not find any difference.

CLAIRE FRASER-LIGGETT: Essentially all five-million-plus letters in these two genomes were identical. And at that point, I think the same thought was running through everybody's mind. And that was that perhaps this was going to end up as a dead-end.

PETER STANDRING: And there our story might have ended, except that one month later, a researcher at USAMRIID, using the sort of sharp-eyed observation that Sherlock Holmes would have admired, noticed something almost unnoticeable: among the colonies of attack anthrax being grown in Petri dishes, the color and shape of some looked slightly different.

PETER STANDRING: Four types of odd-looking colonies, known as morphs, were separated out, so their D.N.A. could be extracted and sequenced. Months and millions of dollars later, the results were in.

PETER STANDRING: So the only difference then, between morph A, B and C here and the ancestral Ames strain, is this one letter?

JACQUES RAVEL: It's one letter, only one, out of the 5.2 million letters that makes the genome.

JACQUES RAVEL: Extremely subtle. And a lot of people, you know, when they looked at it, could have said it's just an error in a sequencing.

PETER STANDRING: So this was the beginning of being able to trace back the attack anthrax to its origins?

JACQUES RAVEL: Exactly. We finally had a combination of signatures that was extremely unique to the anthrax used in the attack.

PETER STANDRING: Searching for four mutations, the F.B.I. began testing the samples it had collected from labs working with Ames anthrax.

CLAIRE FRASER-LIGGETT: It turns out that only eight out of the nearly 1,100 samples contained all four of the genetic mutations that had been associated with the anthrax sent through the mail.

THOMAS DELLAFERA: We then went back to those researchers, investigated the source of those samples, and determined they all came from a particular spore sample known as RMR-1029.

PETER STANDRING: The flask labeled "RMR-1029" was traced to an army lab at USAMRIID. Its keeper: a senior biodefense researcher named Bruce Ivins. Was he the perpetrator? Ask the F.B.I., and you will hear no doubt.

THOMAS DELLAFERA: I can say with certainty that every member of the taskforce is convinced it was Dr. Ivins, and, unfortunately, we are never going to get our day in court.

PETER STANDRING: The reason? Ivins committed suicide after he became the prime suspect in the case. But others doubt Ivins could have made the anthrax used in the attacks.

ALAN ZELICOFF: It's not easy to do openly, particularly in a place like USAMRIID, where there are many people around and where, I think, there's a very strict protocol associated with working with any dangerous pathogen.

PETER STANDRING: Moreover, not a single spore was ever recovered from Ivins's property.

On Screen Text: Anthrax has been found to exist on all continents except Antarctica. But in 1912, polar explorer R.R. Scott may have brought it with him, probably through infected ponies.

Buy the DVD
Buy on iTunes