Common cowbirds are brood parasites that may be operating a mafia-style protection racket in your backyard. Airing August 25, 2009 at 9 pm on PBS Aired August 25, 2009 on PBS 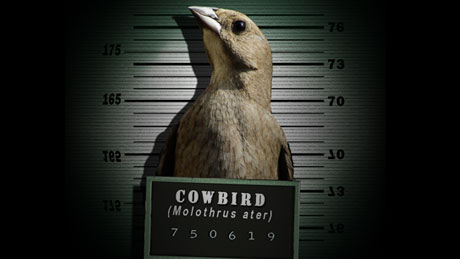 (Program not available for streaming.) Woodpeckers watch out: Cowbirds might make you an offer you can't refuse. The common cowbird, a species found in backyards throughout North America, is a "brood parasites"—a phrase ecologists use to describe animals that skip out on parenting by depositing their young in the care of another. In this program, see how ecologist Jeff Hoover has stumbled on a clue that might unravel the most brutal reign of terror in the avian world.

NEIL DeGRASSE TYSON: You know, things can get tough out there in the animal kingdom. Disagreements between species may arise; unpleasantries may occur; sometimes, steps must be taken to ensure the survival of the family. But our expectations have been exceeded by one particular animal, who enforces its will in a manner heretofore seen only in humans.

Correspondent Anna Lee Strachan has ventured into the swamps to track down a creature that may be giving its neighbors an offer they can't refuse.

ANNA LEE STRACHAN: It may look peaceful, but these quiet cow fields might be a cover for a mob.

You know the type from TV.

MARLON BRANDO (As Don Vito Corleone in The Godfather): I'm going to make him an offer he can't refuse.

ANNA LEE STRACHAN: Except this time, the goons aren't human.

Jeff Hoover is on the case. And we're on the trail of one of the most sophisticated crime schemes in the animal world.

AL PACINO (As Tony Montana in Scarface): Say hello to my little friend.

If you've ever seen a cow, you've probably seen a cowbird. The males are black with brown heads and the females are sort drab gray. Until now, intelligence was never considered a trait because of a certain reputation.

ANNA LEE STRACHAN: Why? Because cowbirds are freeloaders. They never make nests or raise their own kids. They just ditch their eggs in other birds' nests, and let someone else do all the work. Just ask any birdwatcher.

BUBBA SCALES (Birder): The cowbird chicks totally dominate the nest scene at the expense of the chicks that are supposed to be there.

COURTNEY HOOKER (Birder): You know, it's kind of sad to see a huge cowbird, and this tiny little songbird just running back and forth all day long trying to feed it, and the other chicks starve to death.

ANNA LEE STRACHAN: In fact, cowbirds are so good at what they do, they appear to be driving several songbird species to extinction.

But things weren't always this way. It's partly our fault. And it all started in the Wild West. Cowbirds used to roam with the buffalo, and only sneak eggs on species living close to open land. But now, with the bison gone and more manmade open land than ever before, we've invited cowbirds into every last corner of the country, pushing dozens of already troubled species to the brink.

SCOTT ROBINSON: It's a pretty serious problem. Without cowbird control, some of those populations, perhaps some of those species, would be extinct now.

ANNA LEE STRACHAN: And it gets worse. Cowbirds can somehow sucker over 150 different bird species to raise their offspring. How do they get away with this? Why don't the victims just throw those eggs out?

That's where Jeff Hoover comes in. He's a bird ecologist with the Illinois Natural History Survey, and he thinks something in this story just doesn't add up.

JEFF HOOVER: There she goes. She just flew out.

For the longest time it's been thought that cowbirds are either dumb or lazy, and they figured, "Oh, all they do is that they come and they lay their egg, and then they forget about it."

JEFF HOOVER: They just ditch it, and they never follow up.

ANNA LEE STRACHAN: Case closed. That is, until Hoover started studying one of the cowbird's local hosts, the Prothonotary Warbler.

JEFF HOOVER: We started seeing some really odd things happening. I would be watching a pair of warblers bringing food to a nest, and that nest contained a cowbird

baby, and I'd happen to notice, "Oh, is that a female cowbird?" Yeah, there's a female cowbird sitting maybe 50 feet away, kind of hidden, and watching. And then I just kind of wrote that off, but then I saw it again.

ANNA LEE STRACHAN: Then Hoover stumbled on a surprising twist. It happened when he started removing cowbird eggs from warbler nests in an effort to increase the number of warbler offspring.

JEFF HOOVER: And when we started doing that, we found that some of these nests were starting to have things happen to them. We'd see warbler eggs disappear, warbler eggs get broken. The usual suspects would be a raccoon, snakes, flying squirrels, but they weren't a problem before we started removing cowbird eggs.

ANNA LEE STRACHAN: Trashing nests? Are we talking about revenge?

JEFF HOOVER: We were in a little bit of denial because we didn't think that the cowbirds would be capable of this kind of sophisticated behavior. No one had really documented it before, and cowbirds have been studied a lot.

ANNA LEE STRACHAN: We are talking about cowbirds here, a.k.a., lazy bums who pal around with cattle all day. Could cowbirds really be doing this?

To find out, Hoover would need a scheme to catch these culprits red-handed. And he knows just the place to start.

Welcome to Illinois swamp country, where cowbirds get away with dumping over 4,000 eggs on warbler parents every year.

So where are we headed?

JEFF HOOVER: We are headed to a site called X swamp.

JEFF HOOVER: Like X Files. There aren't any aliens here, but it's got about 20 pairs of the warblers that we're studying, and there's also cowbirds here, so it fit the bill for what we needed.

JEFF HOOVER: And maybe if I can take the poles from you.... And this looks like a really good spot to put up one of our nest boxes.

JEFF HOOVER: Right here. There. Okay. So we've got our two poles and cardboard milk and juice cartons.

ANNA LEE STRACHAN: Next, we'll line up hundreds of carbon-copy nest boxes all over the swamp.

So now we've got a nice little home here for the warbler.

JEFF HOOVER: Right, and if we left it out like this they probably wouldn't use it. So we need to make it...

ANNA LEE STRACHAN: It looks a little suspicious, I have to say.

JEFF HOOVER: Yes, yeah. We need to make it blend in a little better with the environment out here.

ANNA LEE STRACHAN: But how do you keep other critters like snakes and raccoons from butting in?

JEFF HOOVER: So this is axle grease. It keeps things like raccoons from being able to climb up and do anything with the nest.

ANNA LEE STRACHAN: Ah, so this is like predator-proofing?

JEFF HOOVER: Exactly. This is really important for us to be able to eliminate yet another one of the possible suspects for who's ransacking our warbler nests.

ANNA LEE STRACHAN: So we've set the scene and ruled out the usual suspects. But to pin any nest-trashing on the cowbird, we'll need to rule out the warblers too. They could be trashing their own nests, for all we know. And that calls for a little custom modification to the housing.

Oh, look at that.

JEFF HOOVER: There we go.

JEFF HOOVER: Yeah. So this is the wide opening, or the big opening that both the warblers and the cowbirds can fit through.

JEFF HOOVER: What we're going to do next is we're going to take this smaller drill bit, and the warblers, believe it or not, can still fit through that size of an opening.

JEFF HOOVER: But female cowbirds are about three times the size of the warbler; they can't.

JEFF HOOVER: Exactly. So we start with the large opening, because we want cowbirds to come in and lay their eggs in the nests. And then we will remove cowbird eggs, and put this insert in. And if we put this insert in there, these nests should all be safe, because cowbirds can't come in.

ANNA LEE STRACHAN: The plan? First start all the boxes with big openings—that way cowbirds can get in and lay their eggs—

JEFF HOOVER: Once the female warbler leaves, it's go time for the female cowbird. The cowbird comes stealthily, flies in, lays her in egg in about 10 seconds time and blasts off. And she's done.

ANNA LEE STRACHAN: —then take the cowbird eggs out, and for half the boxes, put those inserts in. Now these nests should all be safe.

The others still have big openings, so if they're the only ones to get ransacked, we'll know who done it. Leaving one last step: waiting.

JEFF HOOVER: Head out this way.

ANNA LEE STRACHAN: All right. So have you ever made a cowbird egg omelet?

JEFF HOOVER: My guess is that it probably wouldn't taste too bad, especially with a little bit of Tabasco sauce on it.

ANNA LEE STRACHAN: The stakeout begins: dozens of nests, day after day, the team slogs through the muck to check the status of the eggs.

It takes months, but slowly a pattern begins to emerge: only the nests with big openings are getting ransacked.

JEFF HOOVER: And over a number years, the pattern became really, really clear to us, that, you know, "Oh my goodness! We've actually got experimental evidence that female cowbirds are really doing this stuff."

It's the most compelling experimental evidence ever of an animal, besides us, exacting a mafia-like retaliation.

SCOTT ROBINSON: My first reaction was, "Oh boy, they're way smarter than we thought."

ANNA LEE STRACHAN: And they even caught the whole thing on tape. With quick, sharp stabs, the female cowbird does the dirty deed. Within seconds, the entire warbler brood is destroyed.

JEFF HOOVER: We had really nailed it. But then why would they destroy the contents of the nest? What does that do for the cowbird?

ANNA LEE STRACHAN: Perhaps it's a power play cowbirds use to force other species into accepting their offspring.

JEFF HOOVER: Because the warblers could learn, "If you don't play along with this game, if you don't raise my offspring, there's a penalty. And that penalty is that we're going to come back, and we're going to mess up your nest."

SCOTT ROBINSON: We suddenly have to view these birds as much more sophisticated than we'd ever thought. That says some amazing things about avian intelligence.

ANNA LEE STRACHAN: So maybe it's time to reconsider the cowbird's reputation.

JEFF HOOVER: I think the word "debunked" is exactly what we've done. They come back and they monitor nests; they're actually seeing their offspring are being taken care of. What I really like about it is that it's the female cowbirds, too. It's Tina Soprano instead of Tony Soprano, in this case, with the cowbirds.

On Screen Text: Overseas: another scourge; another bird species that exhibits the same shocking behavior.

These cuckoos leave their young with magpies. But the magpie is no angel. Valuables left in its greedy reach are not around long. A lesson to all, worth heeding.