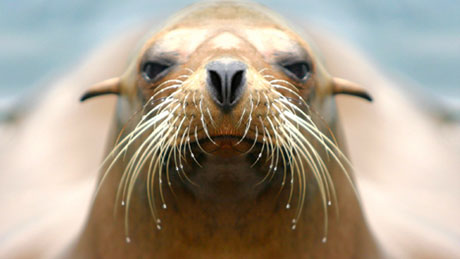 (Program not available for streaming.) Scientists studying the behavior and intelligence of seals, sea lions, and other captive marine mammals at the University of California's Long Marine Lab say that these animals are challenging long-held assumptions about what makes humans different from other animals. Correspondent Ziya Tong discovers just what the researchers mean after she meets some of their gregarious pinniped students.

NEIL DeGRASSE TYSON: Class, we know that some animals can learn to do all kinds of entertaining tricks. But now we're finding out that some creatures can learn and even reason in a way that's totally unexpected.

Correspondent Ziya Tong had a close encounter with a group of animals who not only go to school, they study and they're actually acing their tests!

Okay, so this was an offer I couldn't refuse...

ZIYA TONG: My God, what did I get myself into?

I've flown across the country for a kiss, a kiss from a walrus—all 2,300 pounds of him.

His name is Sivuqaq, and he and two females live here at a Six Flags Amusement Park in Vallejo, California. They were found abandoned in Alaska, when they were only two weeks old.

LEAH COOMBS: So here's their food.

LEAH COOMBS: Do you want to grab a handful out of there?

LEAH COOMBS: Are you ready?

ZIYA TONG: I think so.

This is certainly a long way to come for a kiss.

LEAH COOMBS: So, this is Siku, right here, one of the girls.

And now, seeing their size, I wonder if it was such a good idea.

So lean in to her so she can get to you.

ZIYA TONG: All my fears aside, these guys really know how to impress a gal.

As charming and funny as these characters are, some scientists say these clowns are challenging long-held assumptions about what makes humans different from other animals.

I never thought you could be so friendly.

LEAH COOMBS: Good girl. Give me a sound. Good.

ZIYA TONG: And that is what Colleen Reichmuth and Ron Schusterman study. They're trying to understand the behavior and intelligence of these marine animals and others, like seals and sea lions, that all belong to a family of fin-footed mammals called pinnipeds.

At their lab, at the University of California, Santa Cruz, they and their students work to understand the how these animals' brains function. And to do so, they run the lab much like a school for pinnipeds.

Meet the class star, Rio, a California sea lion. Definitely entertaining, but no academic slouch either.

COLLEEN REICHMUTH: Rio's really a remarkable animal. She's had about 21 years of schooling.

ZIYA TONG: Rio has some pretty remarkable classmates, too, including Sprouts, a harbor seal...

ZIYA TONG: At this would-be-school, the animals spend their days taking tests.

COLLEEN REICHMUTH: Sea lions can pass tests that are very difficult for many other species to pass, including some of the great apes and including humans.

ZIYA TONG: Here's how it works. Rio, like a participant at a game show, sits in front of a wood set and is shown different characters, some that look like numbers, some like letters.

Rio has been taught that certain sounds, like crickets, go with a particular number or letter, like D.

So, when the buzzer sounds, she selects her answer by pointing her nose at one of the cards. If she makes the right match, she gets a fish.

Rio loves getting fish rewards and memorized very quickly that particular sounds go with particular letters or numbers. For instance, the ring of a telephone goes with B.

COLLEEN REICHMUTH: So, Rio could learn, by trial and error, that straightforward rote memorization that if she hears the ring, then she should always choose B. And she's able to make that type of association very quickly.

ZIYA TONG: Sea lions like Rio are perfect for this kind of testing because they are like, well, a dog with bone.

COLLEEN REICHMUTH: Sea lions can be very focused. They can ignore lots of other distractions, and really home in. When Rio makes an error, you may see her kind of tense up, jump in the pool, swim around. She may bark. She'll pace around a little bit. She's a bit intense.

ZIYA TONG: As any student knows, rote memorization is a useful skill in taking tests for a sea lion or a human, but it isn't all that impressive when it comes to demonstrating intelligence.

But today's test is.

COLLEEN REICHMUTH: This is J, as in jack, on the right; number 9, on the left.

ZIYA TONG: Colleen wants to see if Rio can exhibit that supremely human skill of logic.

COLLEEN REICHMUTH: So Rio had previously learned that A, B and C, that all letters could be grouped together. And now, she learned something new: that ring goes with B.

ZIYA TONG: So today, Rio is presented with a new problem. She hears the familiar ring sound, but her choices are only the letter C and the number 9, not B the answer she has been taught. Now Rio must figure out what answer will get her a fish. Very quickly, she figures out that she can substitute B with any other letter.

COLLEEN REICHMUTH: It turns out that Rio is able to use a logic rule to solve a problem that you haven't encountered before, being able to, you know, think it through and be correct on your first exposure.

ZIYA TONG: Rio scores over 90 percent on this exam, definitely an A student.

It was through experiments like this that Rio became one of the first animals to demonstrate a kind of higher order reasoning once thought limited to humans. And this kind of reasoning is also believed to be the basis for the most human of intellectual expressions: language.

So how does this research relate to the evolution of human language?

RONALD J. SCHUSTERMAN (University of California, Santa Cruz, Long Marine Laboratory): Symbols have meaning. They stand for something else. Many experiments now suggest that different types of animals have an understanding of meaning. They can comprehend the use of symbols.

COLLEEN REICHMUTH: You can make the analogy to the way we use sounds to identify certain objects in our environment. For example we use the word "car" to identify a physical shape that is a car.

ZIYA TONG: Another aspect of Reichmuth and Schusterman's research is to see if these animals can be taught to control the sounds they make, like humans do when we learn to speak. That is where our one-ton walrus friends come in.

ZIYA TONG: Most mammals make particular sounds only in reaction to a specific situation, like a dog that growls when it's threatened. Efforts to train apes and other land-dwelling mammals to control and modify the sounds they make have largely been unsuccessful.

ZIYA TONG: A lot of animals obviously communicate through sound, so what's different about a walrus?

RONALD J. SCHUSTERMAN: What this training shows is they have incredible control over this, so that they can learn to produce these under certain occasions and inhibit them under other occasions.

LEAH COOMBS: Give me a sound, something else, now.

ZIYA TONG: Through the rigors of higher education, it seems that animals like Sivuqaq, Rio and Sprouts, are capable of surprising intellectual feats...

Oh, you deserved this one. You worked extra hard.

...and that suggests that many of the skills we considered to be uniquely human, just might not be.

It isn't until about four years of age that humans are able to make the associations that Rio made.