Astronomers may be on the brink of finding Earth-like planets beyond our solar system. Airing July 7, 2009 at 9 pm on PBS Aired July 7, 2009 on PBS 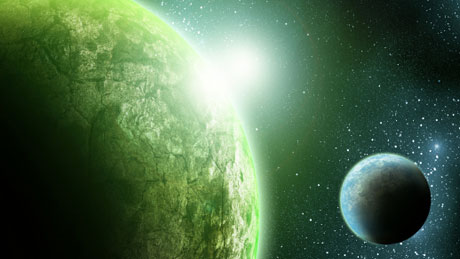 (Program not available for streaming.) NOVA scienceNOW visits astronomers who may be on the brink of finding "another Earth" outside our solar system but within our Milky Way galaxy. A new planet-hunting machine, the Kepler telescope, is at their disposal. This and other ingenious technologies could finally answer the age-old question: Are we alone?

NEIL DeGRASSE TYSON: Hi, I'm Neil deGrasse Tyson, your host of NOVA scienceNOW. Wouldn't it be cool, if the universe were like it is in a lot of movies: filled with aliens, even intelligent life that we could meet, socialize with?

But if there are other creatures out there, where would they be? We've been searching the skies for a while now to find planets other living things could call home. And now, planet hunters say they're tantalizingly close to that goal.

GEOFF MARCY: Most of us, when we're children, we look up into the night sky and we wonder, "What is our place in the universe? Are we somehow related to the stars, the planets? Are there other beings out there?"

NEIL DeGRASSE TYSON: Geoff Marcy has spent his career hunting for other worlds, but it's clear that not every world is friendly to life as we know it.

GEOFF MARCY: What renders a planet, indeed, suitable for life? Well, clearly, you want a planet that has some water on it, because water is the cocktail mixer that allows the chemistry of our bodies to even work.

NEIL DeGRASSE TYSON: If we want a planet with liquid water, then it can't be too close to its star; that would make it too hot, and the water would boil away. And it shouldn't be too far away, either; too cold, and you'll likely get an ice ball.

What everybody really wants to find is a little rocky planet, whose distance from its star is juuust right, a "Goldilocks" planet with oceans of liquid water. But hunting down a planet just like ours has been a daunting task. In fact, not long ago, we hadn't found any planets beyond our solar system, none at all. They're so far away and so dim, they get lost in the glare of their own suns, the stars they orbit.

LISA KALTENEGGER (Harvard-Smithsonian Center for Astrophysics): It's like a lighthouse and having a tiny firefly next to the beam of this lighthouse; this is what you're looking for.

NEIL DeGRASSE TYSON: So to improve their chances, most planet hunters, like Geoff Marcy, focus on stars.

GEOFF MARCY: Here we go, first star, shooting. Wow, it's beautiful. Okay, we can go to the next star.

NEIL DeGRASSE TYSON: Using the big, powerful Keck Telescope, in Hawaii, Geoff looks for slight wobbles in a star's position, signs that a planet might be orbiting.

GEOFF MARCY: These planets do one thing that is just glorious. They're so massive that, as they orbit the star, they pull gravitationally on the star. So if you just watch the star, you see it move to and fro.

NEIL DeGRASSE TYSON: This so-called "wobble method" of planet hunting is a little bit like watching people walk their dogs.

NEIL DeGRASSE TYSON: The idea is you don't have to see the dog itself to know I'm getting yanked on by something.

GEOFF MARCY: And of course, that's what we do. We watch stars that are being yanked on by their host planets and, of course, in that case the leash is gravity.

NEIL DeGRASSE TYSON: Thanks to the wobble method, Geoff and other hunters have, so far, tracked down hundreds of planets. Most of them are enormous balls of gas, like our Jupiter—which itself has 300 times the mass of Earth—and some orbit extremely close to their stars.

GEOFF MARCY: They're so close, skimming along the surface of the host star, that these planets are blowtorched to 1,000, 1,500 degrees. So they're so hot that the organic molecules of which our bodies and other life forms on the earth are made would disintegrate.

NEIL DeGRASSE TYSON: It turns out, if we want to find more comfortable Goldilocks planets like Earth, there's a little problem with the wobble method. If a hot Jupiter is like a big dog yanking on its owner, then Earth is kind of like this.

It might be full of life and totally lovable, sure, but gravity-wise, it's kind of wimpy. It's just not going to have much of an influence.

If you're only watching me, you might never know the dog was there. Same goes for a star out in the galaxy. The teeny tiny wobble caused by an orbiting Earth is really hard to detect, and that's why, despite all their successes...

GEOFF MARCY: So far, we astronomers haven't found a single Earth, not one.

NEIL DeGRASSE TYSON: ...if we want to find a place for life, we might need another method.

Recently, I headed up to Mount Hopkins in Arizona to meet another planet hunter, one who's using an entirely different approach in the search for habitable worlds.

Dave Charbonneau's experiment is based in an old shed, once used to track Soviet satellites during the Cold War. As planet-hunting projects go, this one is relatively low budget, because, unlike the wobble-hunters, he doesn't need the biggest, most powerful telescopes.

You know, when I walk into big observatories, I expect big telescopes. These look kind of puny to me.

DAVE CHARBONNEAU: But there are lots of them.

NEIL DeGRASSE TYSON: Dave can use smaller, cheaper telescopes, because, in his search for habitable worlds, he's not looking for a wobble at all.

DAVE CHARBONNEAU: It may be easier, instead of looking for the wobble, to actually look for an eclipse.

NEIL DeGRASSE TYSON: We can see this kind of eclipse, or transit, right here in our own solar system, when Venus or Mercury passes between Earth and the Sun. But when the planet and its star are light-years away, you can't see a round silhouette, but sometimes the star will appear to dim ever so slightly.

DAVE CHARBONNEAU: Then...so, the idea is as the planet passes around in front of the star, then it'll block some small part of the light. And so, we'll measure this little miniature eclipse. Essentially, we'll measure that the star will get fainter for a short period of time.

NEIL DeGRASSE TYSON: These kinds of transits are pretty rare, so Dave is casting as wide a net as he can, tracking a couple of thousand stars. That's why he needs a lot of telescopes.

Today, Dave and his team recruited me to help set up a few more.

DAVE CHARBONNEAU: This number 7? First thing we need is the mount.

NEIL DeGRASSE TYSON: Let's do it.

No matter how high-tech the operation is, never leave home without duct tape.

DAVE CHARBONNEAU: Well, this is the power cable.

DAVE CHARBONNEAU: And this is the data cable. Power goes in, planets come out.

NEIL DeGRASSE TYSON: Using this new transit method, Dave has already discovered several new planets, but so far they're all the size of Jupiter, or bigger, and not habitable. Now, he's hoping to improve his chances of finding a small, Goldilocks planet by focusing his telescope on a particular kind of star, called a "red dwarf."

Red dwarfs are much, much smaller and dimmer than our sun, so, if a small planet passes in front of a red dwarf, it will block out a larger percentage of its light than if it crossed in front of a bigger star, like our sun.

As sundown approaches, the roof of the shed slides away. And when the stars appear, the telescopes go to work, swooping around to point at one red dwarf and then another, hunting for any trace of a transiting planet.

The telescopes are designed to do their job alone on the mountaintop, but I saw evidence that they might have some visitors.

DAVE CHARBONNEAU: Yeah. Unfortunately, those appear to be paw prints.

DAVE CHARBONNEAU: Yeah, we've come to realize, recently, that it appears that some animal is coming in here, perhaps during the night, and maybe looking at itself in the mirrors.

NEIL DeGRASSE TYSON: Dave hasn't discovered the culprits yet, but whoever they are, they haven't stopped the telescopes from gathering thousands of images of stars.

As the pictures come in, a computer immediately analyzes them, looking for the slightest dimming.

But the telescopes will only see it if the planet's orbit is aligned just right, so that it passes between us and the red dwarf star. So you need star systems that are edge-on to our view.

NEIL DeGRASSE TYSON: And you don't know that yet about your 2,000 stars.

NEIL DeGRASSE TYSON: It sounds like it's a challenge.

DAVE CHARBONNEAU: That's right. We are looking for the needle in the haystack. But, if you find one habitable planet, that's a huge discovery. That's worth it. That justifies all of this.

Dave has high hopes that the transit method is a great way to find habitable worlds, and he's not alone. After years of preparation, NASA just recently launched the Kepler space telescope.

Over the next three or four years, Kepler will be looking towards the constellation Cygnus, keeping watch on about 100,000 Sun-like stars, searching for transiting planets.

Since it's high above Earth's blurry atmosphere, Kepler has the ability to find a planet pretty much like our own, orbiting a star just like our sun.

GEOFF MARCY: We want to find Earths. We want to know whether we're alone. And Kepler is the first mission that can find true twins of our earth: Earth-mass planets, Earth-size planets, that orbit in an Earth-like distance.

NEIL DeGRASSE TYSON: Of course, if and when we locate a livable planet, we'll want to know, is anybody home? And when I say "anybody" I don't necessarily mean one of these movie guys. I'd be thrilled with signs of microbes.

As we sniff out the chemistry of life on distant worlds, eventually, we should answer that question, too. And the cool thing is, pretty soon, we'll know just where to look.

LISA KALTENEGGER: We are just at the verge of finding these planets. We can answer a question that was asked thousands of years ago—maybe in five years, maybe in 10—but we'll answer it.

GEOFF MARCY: We should know, within our lifetimes, whether there are other Earths and whether some, or most, of them are habitable, like our own earth. What a, what a lucky time to be alive.

On Screen Text: In the mid-19th century, astronomers noticed that Uranus wasn't orbiting the way it should...like this.

Something mysterious was pulling on it.

And when they pointed their telescopes to that mysterious spot, they saw another planet. And they named it Neptune. It was the first time a planet was discovered in a way other than direct observation.

Edited by
Steve Audette
Written and Produced by
Julia Cort