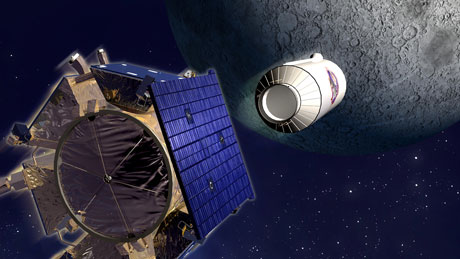 (Program not available for streaming.) Tag along with a team of scientists at NASA who will smash two SUV-sized rockets onto the lunar surface and unleash a debris cloud to study with LCROSS (Lunar Crater Observation and Sensing Satellite). The data could provide the key to understanding how to build a permanent base on the moon, accelerating a new "race to the moon."

Forty years ago, humans landed on the moon. We went back five more times, but stayed only a few days each trip. Many of us hope that someday we can stay longer, establish a permanent base here, maybe even use it as a rest stop for interplanetary travel. But if that's going to fly, the moon's got to give us a little more help by providing some basic resources. One major resource NASA hopes to find, any day now, is water.

Who can deny it? We all have a certain fascination with destruction. Explosions, collisions, they're an undeniable guilty pleasure. And for a lucky few at NASA, destruction is actually part of their job description.

PETER SCHULTZ (Brown University): I blast things. I've done this since I've been a kid. That's exactly what I'm doing now. I'm a grownup, and I still play in the sandbox. I get to throw things at very high velocity.

NEIL DeGRASSE TYSON: This is Peter Schultz's playground: the vertical gun range at NASA's Ames Research Center, in Northern California. For more than 30 years, Schultz and his team have been loading projectiles into this 30-foot steel barrel, mounted on a lifting arm. They then fire them into small models of planetary surfaces.

So this is the gun, huh?

PETE SCHULTZ: Yeah, yeah, this is the big gun.

PETE SCHULTZ: It was made in the '60s, so this is at the birth of Apollo. This is when...this is the type of gun that they made to try and understand the moon.

NEIL DeGRASSE TYSON: The surface of the moon?

PETE SCHULTZ: The surface of the moon.

NEIL DeGRASSE TYSON: Getting to the moon and colonizing it have always been the target of human obsession. But it was 1969, before we really started to understand the moon firsthand.

NEIL ARMSTRONG (Archival Footage): I'm going to step off the LEM, now. That's one small step for a man, one giant leap for mankind.

NEIL DeGRASSE TYSON: Exciting as that first step was, the moon looked pretty bleak. In the nearly 50 pounds of moon rocks brought back by Armstrong, Aldrin and Collins, scientists found hardly any ingredients—like nitrogen, hydrogen and carbon dioxide—that are essential to support human life. And without the most important of them, water, the moon would forever remain hostile to human colonization.

Lunar scientists had long theorized that large stores of water might have accumulated on the moon, just as they did on Earth, deposited by the impacts of comets. But they believed any water near the surface, exposed to the sun, would have long since evaporated. In 1998, NASA launched Lunar Prospector, a small spacecraft designed to orbit the moon pole-to-pole. It carried a highly sensitive spectrometer, a device tuned to detect hydrogen, a possible sign of water, to a depth of three feet, even in areas of permanent darkness.

And in the darkest craters, near the moon's poles, Prospector struck the mother lode: signs of water, up to six billion tons of the stuff. This hint of water changed the game in an instant.

DANIEL ANDREWS: Water makes up, sort of, the foundational building blocks for living on the land on the moon. A half-liter bottle of water, on average, might cost $15,000 to bring it to the moon. That's crazy. What if the water was there? You could be using it to create fuel and use the moon as a launching point to go to other places.

NEIL DeGRASSE TYSON: So, for NASA, finding water on the moon may in fact be the next big step toward space colonization. But before we can think about living up there, we have to make sure we know where the water is. And NASA has a new mission aimed at doing just that.

So this is LCROSS?

It looks like this ring, right, with just these things stuck on it.

STEPHEN HIXSON: It actually looks like a sewer pipe.

NEIL DeGRASSE TYSON: Short for Lunar Crater Observation and Sensing Satellite, LCROSS is a small and simple spacecraft, designed to sit on top of the upper stage of its launch rocket and take control of the rocket when it's empty.

LCROSS's purpose is to smash that school-bus-sized empty rocket stage into a dark lunar crater at 5,600 miles an hour. The impact will toss the crater's contents high up into the sunlight, where LCROSS can analyze them in great detail, and perhaps find new proof of lunar water.

Remember Pete Schultz's vertical gun? Well, its purpose is to prepare NASA to experience on Earth what LCROSS will encounter on its Moon mission.

To do that, Schultz's team loads a projectile that will act as a stand-in for the empty rocket stage that LCROSS will throw at the moon. Then they stand back and watch what happens inside the chamber.

So we're about to go in here, but tell me, first, the gun's not loaded.

NEIL DeGRASSE TYSON: Inside the chamber, which will later be drained of air to mimic the moon's lack of atmosphere, Schultz prepares his own little mini-diorama of the lunar surface, using an array of highly specialized gear.

This is not the surface of the moon, because it's smooth.

PETE SCHULTZ: That's right, so now we have to make some craters, so...

NEIL DeGRASSE TYSON: The whole idea here is to recreate the situation that LCROSS will observe when it flies through the dust plume created by the impact of its empty rocket stage.

It takes about 20 minutes to suck the air out of the chamber. The tension builds, then comes the moment of, well, silence. Hey, there's no sound in a vacuum, all right? But the results are still impressive.

PETE SCHULTZ: Look at this! See this? That's the red stuff, and now that's coming into light.

PETE SCHULTZ: Into sunlight, and you're seeing the ejecta.

NEIL DeGRASSE TYSON: And the red stuff is glowing red-hot.

When the simulation is slowed down, the beauty and complexity of the plume become apparent. It won't just be a big pile of moon dirt. It'll be a delicate trumpet-shaped curtain of lunar dust, spreading out from the center of the impact site.

It is beautiful, but how will NASA be able to tell what it's made of and if there is water to be found? In this makeshift lab, team members are using some inexpensive drugstore supplies to test what LCROSS will see when it analyzes the impact's dust curtain.

ANTHONY COLAPRETE: However, the lunar dust is quite fine, like baby powder, so it's not too far an analog-...

ANTHONY COLAPRETE: It does feel good.

NEIL DeGRASSE TYSON: As the baby powder is shaken through the sieve, the team tests how the sun's light will be reflected and scattered when it passes through the dust to LCROSS's optical spectrometers.

So what you're really doing is exploiting the fact that the sunlight is coming through the dust, in order to analyze the dust itself?

NEIL DeGRASSE TYSON: As sunlight passes through the dust curtain, the compounds in the dust absorb specific frequencies of light. LCROSS's optical spectrometers measure which frequencies are absorbed, and from those measurements, scientists can tell exactly what the dust is made of. If LCROSS is lucky, it will see a telltale signature like this, indicating...

DANIEL ANDREWS: We want to move from just sorties to longer stays, to habitation.

NEIL DeGRASSE TYSON: Launched just last month, LCROSS sat on top of a two-stage rocket. About two hours after liftoff, the primary payload was sent on its way. Next, instead of throwing away the empty second stage, tiny LCROSS held onto it. This will be its projectile. Then, LCROSS began shepherding this empty space junk in two huge orbits, out past the moon

and all the way back around the earth. This slingshot trajectory is required to get LCROSS and its projectile up to speed and lined up perfectly with the target crater near the moon's north pole. Then comes the final delicate dance.

ANTHONY COLAPRETE: Eight hours prior to impact, we let go of that upper stage of the rocket, the Centaur, and we watch it as it goes in and impacts. When it impacts, it makes an explosion. Our little shepherding spacecraft now becomes an observing spacecraft. Eventually, we actually fly through the plume itself, making measurements the whole time, and impact ourselves.

NEIL DeGRASSE TYSON: About two and a half months after launch, LCROSS will meet its demise. And if it does hit its mark, the resulting 40-mile-high debris plume should be visible from Earth through an amateur telescope. And in one fleeting instant, the LCROSS team will know success or failure.

But on a grander scale, much more is at stake. If LCROSS does find water, we may just be looking at the first rest-stop on our way to the stars.

On Screen Text: The first spacecraft to crash into the moon was the Soviet Luna 2 probe in 1959. In 1965, Americans had a live camera on Ranger 9 as it collided. The Apollo program smashed 5 spent rocket stages and 4 lunar module ascent craft. Japan, India, China and the European Space Agency did too, for a grand total of 39 impacts.

Edited by
Shirley Gutierrez
Produced and Directed by
Josh Rosen