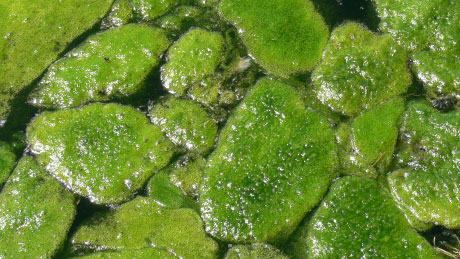 (Program not available for streaming.) What if you could generate useable biofuels that didn't have the problems associated with corn ethanol or plant-based processes, didn't use arable land or freshwater, and didn't rely on foodstuffs, and that also cost very little and could be "tuned" to produce hydrogen? Well, there is such a thing. It's algae, which just may be our biofuel future.

NEIL DeGRASSE TYSON: As we hunt for solutions to our energy needs, there's a simple ingredient that's raising our hopes. It's not animal, it's not mineral, it's not really vegetable. But it's all around us.

Correspondent Andrea Kissick investigates the slimy life form that might provide a promising, carbon-neutral fuel for the future.

ANDREA KISSACK (Correspondent): So, what do this, this and this have in common? Brace yourself: they're all algae.

The earth is home to over 30,000 species of algae, a family of bizarre organisms that are neither plant nor animal. You'll find them from the tropics to the poles. Some are bigger than you, others are too tiny to see with the naked eye. And thanks to a few of the tiniest ones, someday you just might be using algae to fuel your car.

What's so cool about algae?

KRIS NIYOGI: Well, algae are, basically, very efficient solar energy converters, converting the energy of the sun into biomass. They're pretty much everywhere you look. And I can even hold a Petri dish out the window here and catch algae right out of the air, which I can take back to my lab and grow in a growth chamber with lights.

ANDREA KISSACK: So how many of these ancient organisms did we get from sticking our dish out the window for three minutes?

KRIS NIYOGI: You can see there are a lot of colonies on this plate, and I see a couple of green colonies, here. So those are some algae that we caught.

ANDREA KISSACK: And on a good day, how many strains would you expect to find?

KRIS NIYOGI: Basically, half a dozen colonies would be a good day for algae.

ANDREA KISSACK: And a good day for algae is a good day for humans. If algae hadn't started breathing in carbon dioxide and exhaling oxygen three and a half billion years ago, none of us would be here.

KRIS NIYOGI: If algae had never come along and produced oxygen for the earth's atmosphere, humans would never exist.

ANDREA KISSACK: Like most plants, algae have mastered a process called photosynthesis. Basically, algae act like little factories. They use the energy in sunlight to pull damaging carbon dioxide out of the air. Then they break down water to manufacture that CO2 into sugars and fats, and spew oxygen into the air as a waste product. But for the algae, those sugars and fats are what it's all about. They use most of these raw materials to assemble more algae, lots more.

KRIS NIYOGI: So they can double themselves, in some cases, more than once per day.

ANDREA KISSACK: Wow. So it's really gobbling up the CO2.

ANDREA KISSACK: But in certain situations, algae are a bit like us. They can overeat sun energy, and they end up storing the extra energy as oily fat, kind of an algae "spare tire."

And what can we do with that oil?

KRIS NIYOGI: Well, that oil, in many cases, can be very easily converted into biodiesel.

ANDREA KISSACK: It sounds great as a concept, but it's still not quite ready for primetime. For one thing, algae don't want to give up their precious oil, and they've developed a pretty tough skin to protect it. Getting the oil out isn't easy. And before you can do that, you need to start with a serious volume of algae. And that requires land. How much land? This'll give you an idea...

On the inner shoreline of San Francisco Bay is a network of strangely-colored, shallow, manmade ponds. They're actually massive salt reclamation ponds. But the crazy colors come to you courtesy of various families of wild algae that grow near the surface.

So this is kind of what open algae ponds look like?

ROBERT WALSH (Aurora Biofuels): It is, in terms of the size and, and space they would take up.

ANDREA KISSACK: Massive open ponds have long been considered the cheapest way to grow algae for biofuels. But oil used to be so cheap, it just wasn't worth the effort. Well, that era's over, and algae oil companies like Bob Walsh's Aurora Biofuels are up to their knees in open algae ponds again.

BOB WALSH: Our vision is you're going to have several thousand acres that will produce, you know, 120 million gallons a year, using salt water and land that's barren land, food can't grow.

I visited San Francisco's Mission District to get a taste of corn ethanol's dark side.

HOLLY K. GIBBS (Stanford University): The issue is that the biofuels are made from the same things that food is made from today, things like corn or soybeans. And what we're finding is that is leading to rapid increases in food prices.

ANDREA KISSACK: In fact, the 2007 U.S. ethanol mandate translated to a 400 percent increase in the price of corn tortillas, sparking protests in Mexico and elsewhere.

And the dangerous chain reaction continued from there. To cover for U.S. farmland that had changed over to biofuel crops, countries all over the world took up the slack by dedicating new lands to food crops, and they cut down and burned rain forests to do it.

But consider this: burning cleared forests already contributes more greenhouse gases to the atmosphere than the total exhaust from every vehicle in the world.

HOLLY GIBBS: The decisions that we make here in the United States are affecting things from food to forests. When we fuel our cars up with biofuels, we are effectively burning rain forests in our gas tanks.

ANDREA KISSACK: But algae ponds are different, aren't they? You don't have to clear forests for them. And algae can grow in brackish or saltwater. You can build ponds where you can't grow crops. But algae takes up a lot of space, usually far from the city.

And the city is where you find factories and power plants, the most concentrated source of algae's favorite food, CO2. Unfortunately, open algae ponds don't fit well in a landscape like this.

But there are ways to grow your algae indoors. Just plop down an industrial warehouse next to a factory. Then pipe the CO2 belched out of the factory's smokestacks straight to the hungry algae in the warehouse.

And inside the warehouse you might find something like this. It's a working prototype of a device called a photo bioreactor.

Wow. These are wild. So why all the colored lights?

RIGGS ECKELBERRY (OriginOil, Inc.): The colors are because algae is receptive to blue and red, and really doesn't want to have full spectrum light. The U.V. in the full sunlight is actually damaging to algae.

ANDREA KISSACK: OriginOil's idea is to scale up the individual containers to 10,000 gallons each. A setup like this could generate 1,000 gallons of algae oil per acre per day.

The helix bioreactor is pretty flashy packaging. Some algae scientists call it a "techno-toy" that's just too expensive to provide a large-scale solution. And think about this: if algae biofuels are about harnessing the sun, where's the solar source?

RIGGS ECKELBERRY: The devil's bargain in indoor production of algae is that you are now going to go away from direct sunlight. You've got lights, pumps, chillers, and all these things add up to an energy penalty.

ANDREA KISSACK: For Eckelberry, the added energy costs of supplying indoor light and climate control are worth paying when you compare it the total energy produced by his algae well.

So how soon are we going to run high-powered vehicles like jets on algae biofuel? The answer? Now. In January of 2009, jet fuel refined partly from algae oil was used to power a two-hour experimental flight.

For the growing number of algae biofuel startups around the globe, it was a shining proof of concept. But considering that algae biofuels currently weigh in at a whopping $8 per gallon, it's a pretty tough vision to sell right now.

Still, when weighed against the other biofuels options, it's hard not to get excited about algae's future.

HOLLY GIBBS: Algae has a great deal of potential, and part of the reason is that it overcomes some of these limitations that we saw with the crop-based or land-based biofuels.

We need to be cautious as we move forward. We need to think about some of the unintended consequences, the ripple effects or chain reactions, that we might not be thinking of on the surface. You know, 10 years from now, what is this going to look like?

ANDREA KISSACK: From pond scum to power source: it sounds too good to be true, and it may be. It's still unclear if there's enough land to use open ponds effectively, or if photo bioreactors are just too expensive to scale up to factory size. Still, at the risk of being over-optimistic, isn't there something poetic about the possibility that last week's lowly slime...sushi...face cream may just turn out to be next week's future fuel?

On Screen Text: Where does oil come from?

MAN IN TRUCK: From Venezuela.

On Screen Text: No.

WOMAN #3: From decaying things in the earth.

On Screen Text: Yes! It's mostly...algae! It dies, breaks down where it is trapped, in rock, under heat and pressure for millions of years and becomes oil!

And what would happen if we just left it there?

CONSTRUCTION WORKER: It would stay in the ground.

MAN #1: I don't think anything would happen.

On Screen Text: Crude oil does rise to the surface of the earth on its own, where it is eaten by bacteria or evaporates into the atmosphere.