Just once in a while our experts come across an item that even they don't know about. Read about the E.J. Bellocq photos that stumped the specialists at ANTIQUES ROADSHOW's 2001 New Orleans event.

Only rarely are ANTIQUES ROADSHOW appraisers truly surprised. "Most of the things we see at the ROADSHOW are usually variations on a theme and not unfamiliar," says Daile Kaplan, director of Photography at Swann Galleries in New York City. That wasn't the case, though, at the New Orleans ROADSHOW in the summer of 2001 when a woman came up to Daile and casually presented nine loose black-and-white prints of photographs shot by the mysterious artist E.J. Bellocq.

Bellocq revealed the women in more than just various states of undress.

He was an early -20th-century New Orleans photographer who Daile describes as a "Toulouse-Lautrec-like figure in New Orleans." In his official capacity as a commercial photographer, he took pictures of the port city's ships. Unbeknownst to others, though, he also took photographs of the city's prostitutes working in Storyville, then the city's legal Red Light district. Bellocq revealed the women in more than just various states of undress. He also captured the personalities of the women, who often look strong, comfortable, even playful in his photographs. 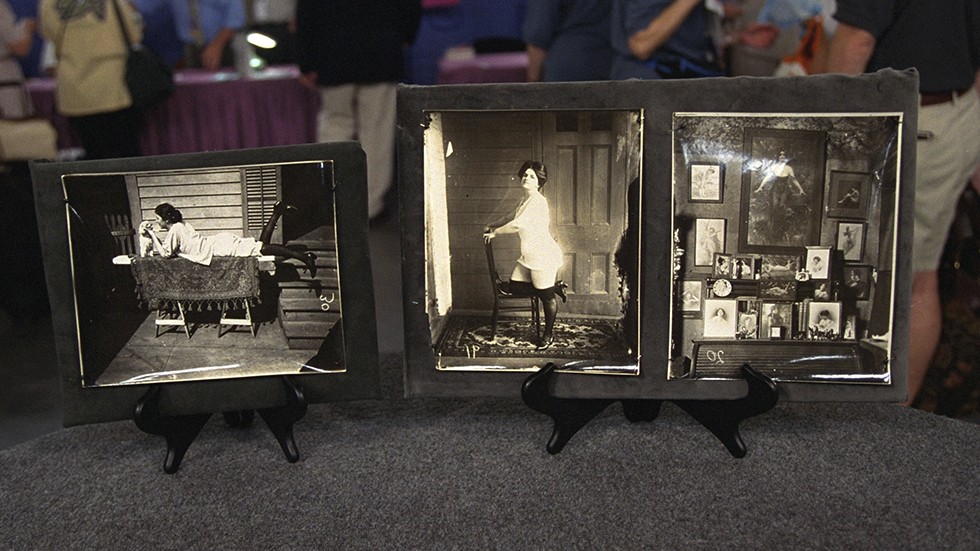 After Bellocq's death in 1949, two New Orleans antiques dealers, Larry Borenstein and Al Rose, found Bellocq's glass-plate negatives in his desk drawer and purchased them. When noted photographer Lee Friedlander saw these glass negatives in 1966 he bought them and printed them for the world to see. Photography experts, including Daile, assumed that Friedlander's prints were the only ones ever made of the Bellocq negatives.

"It was a 'stump the expert' moment," remembers Daile, who told Lynne and ROADSHOW viewers that she actually wasn't sure who had done these prints or when.

And that's where things stood until December 2001, when Daile heard that the Julie Saul Gallery, located near Swann Galleries in Manhattan, was exhibiting Bellocq photos. She visited and learned that these prints had been given to the gallery by Rex Rose, who had inherited them from his father, the New Orleans antiques dealer Al Rose. Rose or Borenstein had apparently made personal prints sometime around 1960, well before selling Bellocq's negatives to Friedlander — all of which had remained unknown to the "photography world."

"I was dumbfounded," Daile says. "Here were these prints that had never before been shown and somehow they connected to this work I had seen six months earlier at the ROADSHOW. It was so weird."

Because these newly discovered prints were made closer to the time Bellocq took them, and are rarer, they are worth more than Friedlander prints, which usually sell for a few thousand dollars. These newly discovered prints are also more valuable because they were made from earlier, and less damaged, negatives. The Julie Saul Gallery priced Lynne's Bellocq collection at between $6,000 and $20,000. Also, the fewer clothes a modeled prostitute is wearing, the more a particular photograph is worth, Daile says, because nudes are in greater demand.

Meanwhile, back in New Orleans, Steven Maklansky, assistant director of Art at the New Orleans Museum of Art, had seen an article in The Times Picayune about the appearance of Lynne's mystery photos at the ROADSHOW. Maklansky immediately called Lynne and hooked her up with Boston Art Conservation. Lynne sent a Bellocq photo there; they analyzed the paper whiteners, even the type of tree used to make the paper pulp, and dated the prints to the early 1960s. Just as Daile Kaplan had suspected, these were indeed pre-Friedlander prints.

All this is good news for Lynne, who at first hesitated to pay the 75 cents for each of her Bellocq photographs when she stumbled across them in a box at an estate sale in suburban New Orleans about five years ago. Now she plans on donating one of the photographs to the New Orleans Museum of Art. She expects to sell the rest.

If Lynne has a regret, she says it's leaving behind one of the Bellocq photographs at the estate sale. It was one depicting a naked young lady reclining on a wicker chaise-longue, an image pictured on the cover of a book on Bellocq published in 1970 by the Museum of Modern Art. This was also the same photograph that inspired legendary director Louis Malle to make his film Pretty Baby, starring a young Brooke Shields. It is probably Bellocq's most famous and valuable photograph.

"I put that picture down because the woman was, well, so nude," confesses Lynne. As soon as she discarded the photo, a gentleman behind her snapped it up. "I feel horrible about that," Lynne says. But all things considered, not a bad bit of antiquing!