Who Was Harry Bridges? 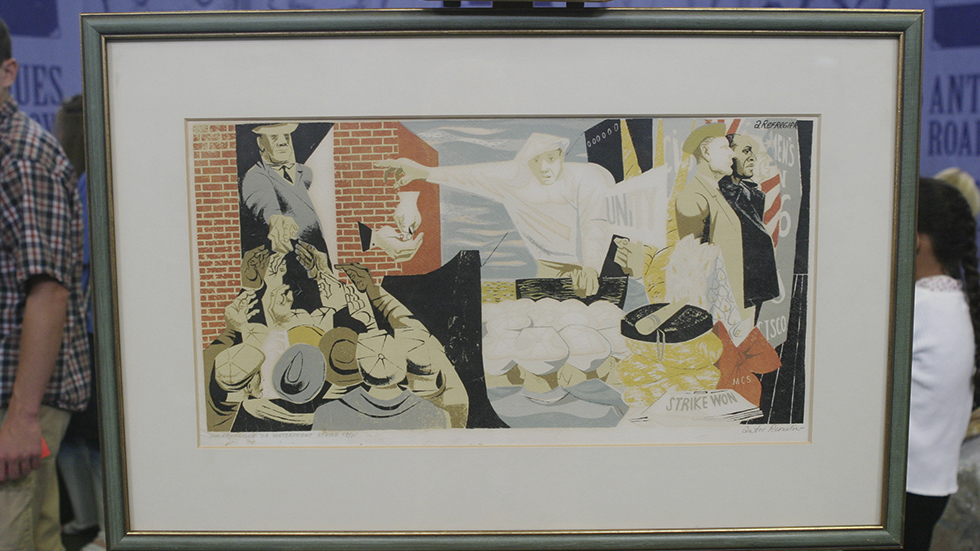 Judith's print represents the role of an important labor leader in the great San Francisco Strike of 1934.

During ROADSHOW's summer 2003 visit to San Francisco, a local guest named Judith brought in an interesting print hoping to find out more about its value. As she told appraiser Todd Weyman, director of Prints and Drawings at Swann Auction Galleries in New York City, her husband had received the print as a gift from the artist in the early 1950s.

Judith explained to Todd what she already knew: The work was a color screen print created in limited edition from a larger mural painted by Anton Refrigier in the Rincon Annex, a renowned FDR-era post office building in San Francisco. Between 1946 and 1948, through a large commission by the federal government, the Russian-born Refrigier painted a series of 27 murals in the building's cavernous lobby, all depictions of the history of San Francisco. Judith's print represents the role of an important labor leader in the great San Francisco Strike of 1934 — a complex, and in many ways, disastrous event that would also become a turning point in the history of American labor relations.

But for many viewers, the fervent white-clad orator at the center of the image — a figure that Judith identified as Harry Bridges — may require further identification. Amid the vast constellation of American historical figures, Harry Bridges' name may not be one that comes readily to mind — at least outside San Francisco. Nevertheless, Bridges was a champion of workers' causes on an international scale, and his legacy as a progressive leader committed to democratic values makes him well worth a second look.

Born in 1901 in Melbourne, Australia, Harry Bridges left home at 15 to pursue a life at sea. Around 1920 his travels brought him to San Francisco, where his destiny was to unfold. Only 15 years later, by dint of his unshakable integrity, straight talk, and astute knack for organization, Bridges had become the leader of San Francisco's beleaguered dock workers, and helped give birth to the International Longshore and Warehouse Union (ILWU).

By the early 1930s, the port of San Francisco was arguably the busiest and most profitable in the world. But the longshoremen who made it all happen, loading and unloading countless tons of ships' cargo day after day, did so under harsh rules and daunting conditions. Pay was scant, yet the prevailing "shape-up" hiring system obliged longshoremen who wished to get and keep this dangerous work to pay kickbacks to their employers.

Bridges was instrumental in bringing this practice to an end. Professor David Olson, of the Harry Bridges Center for Labor Studies at the University of Washington, says Bridges' legacy as a pioneer in the 20th-century labor movement stems from two major reforms that did much to foster solidarity among West Coast longshoremen. First, he developed the concept of the worker-controlled hiring hall and negotiated its implementation with employers. Correcting the injustices of the shape-up system, the hiring hall became a means for the union to exert control at the source of labor, with the ILWU dispatching its longshoremen to the docks based on agreed-upon rules. Bridges' second landmark contribution was securing a coast-wide contract, whereby all dock workers from San Diego, California, to Bellingham, Washington, worked under a single agreement that regularized both wages and working conditions.

He Couldn't Be Bought

From the beginning it was Bridges' steadfast advocacy of honest democratic principles - rather than a bombastic style - that was the key to unity and collective progress for the longshoremen. In contrast with the traditional top-down hierarchy of leadership among most American trade unions, Bridges held tight to his belief that it was the members who should be in control of their union. Says Olson: "Everything the [ILWU] did had to be approved by the rank and file, so it was thoroughly democratic, which gained him the trust and respect of the membership."

Likewise, Bridges' innate sense of fairness propelled him down the path of racial integration decades sooner than most leaders. Calling discrimination "the weapon of the boss" — referring to the frequent practice of fomenting racial tension among workers in order to break strikes — Bridges declared that the ILWU must be a union completely free and open to membership by all, regardless of race, nationality, or belief. And so it became.

Bridges also understood the importance of approaching both the rostrum and the bargaining table with clean hands. On the East Coast, Olson says the longshore union was notorious for the corruptibility of its leadership, "but Bridges couldn't be bought. He was as clean as any trade union leader in the history of the country." In more than 40 years as leader of the ILWU, Bridges never took a salary higher than the highest paid member of his union.

Finally, Olson says, it's crucial to note that Bridges was an internationalist, the first union leader to strategize about labor issues on a global scale. He worked hard to build alliances with dock workers in Australia, France, Great Britain, Vietnam, and elsewhere, thus strengthening the leverage workers had everywhere. In 1967, when migrant farm laborers were organizing under the leadership of Cesar Chavez as the United Farm Workers, Bridges led the ILWU in a sympathetic boycott of grapes being shipped out of California's Central Valley. Because of the alliances he had fostered, the boycott was honored by unions all across Western Europe and Australia.

By the late 1940s, as FDR's Works Progress Administration (WPA) was paying a record commission to Refrigier for his Rincon building murals, the clouds of McCarthyism were gathering. Harry Bridges had already been an object of J. Edgar Hoover's unrelenting scrutiny for more than 10 years. The latest of several attempts — all ultimately unsuccessful — was underway to have him deported as an "undesirable alien" and a Communist.

But Olson points out that the WPA was then especially interested in documenting the lives of the working class, which the art world had historically all but ignored. Thus, WPA artists like Refrigier were attracted to Bridges and his longshore union because, as Olson puts it, the ILWU was "one of the most organized, articulate, forceful, racially integrated, internationally oriented, democratically controlled rank-and-file unions ... Art and work merged."

The long road of the American labor movement, with all its break-downs and forward surges, has made for a bumpy, sometimes violent ride. The violence and chaos of the 1934 San Francisco strike — beginning with dock workers and quickly catching light across all sectors of San Francisco labor — wreaked havoc throughout the city. For many days it disrupted commerce and the rhythms of daily life. In the struggle's give and take between demonstrators and police, hundreds of people were injured and two strikers lost there lives. And it is only one very memorable stop along the way.

Yet at times, from such strife real progress has emerged. Under Bridges' leadership, the tumult of 1934 galvanized the West Coast longshoremen, and strengthened their resolve to build and maintain a union to safeguard workers' rights through openness, democracy, and fair play.

Harry Bridges died in 1990. Through a long career he had survived the temptations of power, not to mention attempts on his life and livelihood, plus much besides. Admirably, to the end, he also kept his eye on the road.