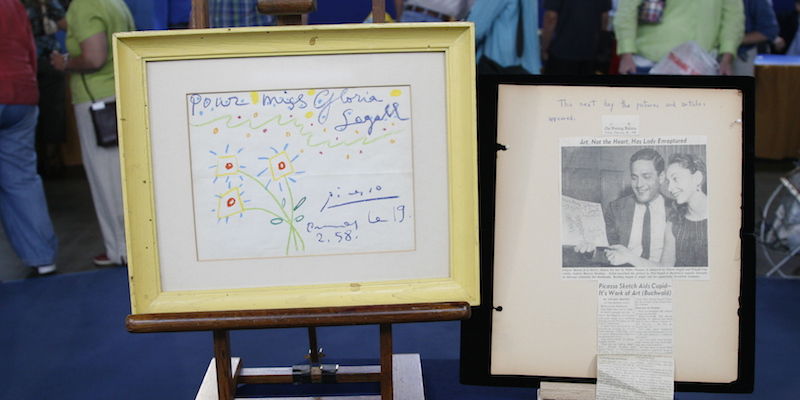 Did the owner of a very special misplaced envelope ever find it?

Visits to ANTIQUES ROADSHOW often reveal treasures ordinary people didn't know they had in hand. But in the case of Ivan and his wife, Gloria, a visit to ANTIQUES ROADSHOW in the summer of 2006 revealed they owned a small treasure, part of which they had subsequently lost. Ivan came to ANTIQUES ROADSHOW's stop in Philadelphia with a charming sketch of three flowers autographed by Pablo Picasso, and an offbeat love story from half a century ago to go with it.

The story began in 1958 with Harvey Brodsky, Gloria's fiancé before Ivan arrived on the scene. Harvey and Gloria—who had an on-again, off-again relationship—had parted, when Harvey became convinced that he could probably win Gloria back if he could get her an autograph from Pablo Picasso, who Gloria admired. Harvey decided to write to humorist Art Buchwald, then a columnist for the Herald-Tribune stationed in Paris, to see if he might help him with his quest.

"I did a stupid thing," Harvey wrote Buchwald, who recounted the incident in a column, and more recently in his memoir, Too Soon to Say Goodbye, "and she told me she never wanted to see me again. I'm writing to you because I'm not giving up on Gloria. Could you get Picasso's autograph for me? If you could, I have a feeling Gloria and I could get back together. The futures of two young people depend on it... Everything depends on you."

Harvey's plaintive plea was seen by David Duncan, a Life magazine photographer and friend of Picasso's. Duncan shared the column with Picasso, who apparently was moved by Harvey's plight. He sketched a few flowers on a piece of paper, wrote "Pour Miss Gloria Segall." Then Picasso signed it, folded it into an air-mail envelope, and mailed it to Buchwald. Buchwald sent the sketch and envelope by special delivery to Gloria in Philadelphia, who was not as moved by Harvey's gesture as Picasso was. "Harvey and I," she announced carefully for the newspapers, "will always be good friends."

Well, long story short, Gloria went on to marry Ivan instead, but she kept the sketch, framed it, and put the envelope in a pouch taped to the back of the frame. For years, the sketch hung in the couple's dining room, and Ivan says visitors would often ask, "Did your kids do that?"

The story didn't progress much until Ivan, in preparation for his visit to ANTIQUES ROADSHOW, fetched the sketch from a closet, where it had been sitting wrapped in plastic for a few years. That's when Ivan noticed that the envelope on the back had disappeared. He explained the situation on air to appraiser Todd Weyman. "The envelope that [the sketch] came in, which I cannot find, is misplaced," Ivan said. "The stationery was watermarked with Picasso's name. You could hold it up to the light and see his name printed on it... And he drew little crayon stripes around the edge."

"Okay," Todd summarized, "So you actually have two drawings by Picasso, but you can only find one at the moment." That was financially significant, he explained, because the envelope would add a couple of more thousand to the value of the main drawing, which he estimated is worth between $15,000 and $20,000 in its own right, given the fascinating provenance.

The Search Goes On

Todd's assessment of the envelope's value got Ivan hunting. He assumed it was in a file cabinet with some other important documents, but he quickly discovered it wasn't there. "Then I looked through all the books on Picasso, all the coffee table books." Still, no luck. "It's a small envelope," he says. "It could very easily be masked by something else."

Every month or two since his visit to the show, Ivan imagines another place the envelope might have slipped away to. "Yesterday, I thought it might be in the top of a closet." It wasn't. "It's become my hobby," he says, "'Looking for the envelope.'"

Finding out that the envelope is worth more than a few hundred dollars, as he previously assumed, has been a mixed blessing. "It's a nice little nest egg," Ivan says. He suspects the envelope might have been thrown out, or is hiding in his attic or the basement, depositories where Ivan, an admitted packrat, and Gloria, a fellow packrat, have boxed many of their worldly possessions. "We haven't looked everywhere," he muses. "But to look everywhere would take 35 days and 35 volunteers... Sometimes, I wish I had put the thing in a bright red jar."

For more about the sketch Picasso drew for Gloria and the press that followed, see: Too Soon to Say Goodbye, by Art Buchwald. Random House, 2006.