Was There Head-Shrinking in Fiji? 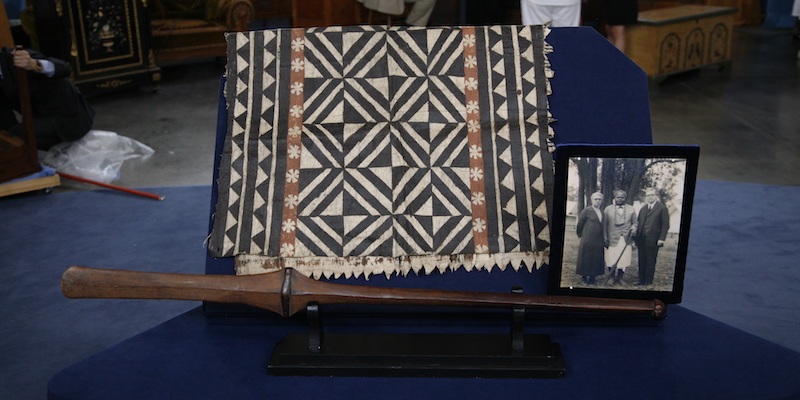 At the Chattanooga ROADSHOW in July 2008, I talked with a guest named George from Ringgold, Georgia, who had brought in a 19th-century tapa cloth and club from Fiji, originally given to his great-grandparents around 1926 by the Fijian chief in the photograph at right, Ratu Meli. During the on-air appraisal, in describing pre-1920s customs in the Fiji Islands, George made a remark about "head-shrinking." Because of time constraints and the complexity of the subject, I wasn't able to deal adequately with the reference during the segment. There are some important distinctions to be drawn, however, and I'd like to take a moment to do that here.

Historically, head-shrinking has been a ritualistic practice seen primarily among the Jivaro Indians of the Amazon River Basin. Trophy heads were also taken by various tribes of Oceania (including the country of Papua New Guinea and the surrounding islands lying north and northeast of Australia) and New Zealand. These heads were not typically shrunk, however, but modeled over with clay and painted. (And despite the term "head-shrinking," as that practice is commonly known, it was not the actual head, or cranium, but rather the tissue surrounding it, that was shrunk.) 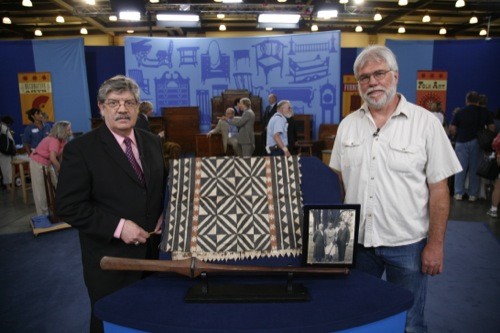 George brought in this tapa cloth and club to the Chattanooga ROADSHOW in July 2008. John Buxton appraised the pair of items at between $2,500 and $3,500.

In general, though, head-shrinking and other trophy-head rituals shared a similar purpose: to capture the spirit of the vanquished, making him subservient to those practicing the ritual. In pictures of authentic shrunken heads you can see that the mouth and eyes are sewn shut. This too is an important part of the ritualistic effort to enslave the spirit of the deceased.

Most of the shrunken heads seen for sale as curios today are fakes created from monkey skulls, which were made to satisfy a demand in the West that began as early as the 1870s. It has been illegal since the 1940s to import shrunken heads into the United States.

Although Fiji is part of the large geographic region of Oceania, the practice of head-shrinking was not a regular part of Fijian custom. However, cannibalism was widely practiced in Fiji until the custom began to decline amid the growing influence of Christian missionaries around the turn of the 20th century. Also known as anthropophagy — the eating of human flesh by human beings — cannibalism, like the process of shrinking heads, has typically been ritualistic in most areas of the world where it was practiced. Fiji is a notable exception, however, in that human flesh was at one time also part of the diet of at least some in the culture (for more see Oceanic Art, by Anthony J.P. Meyer, 1995, pp. 462-463). 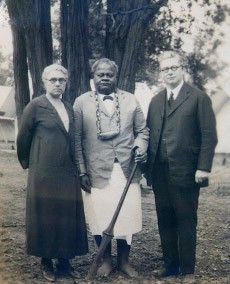 George's missionary great-grandparents pose for a photo, ca. 1926, with Ratu Meli, a Fijian chief who had been converted to Christianity. He is holding a club that he ultimately gave to the missionaries as a gift.

Yet precisely defining the motivation for specific instances of cannibalism is still difficult when examining such a complex subject. In some cases cannibalism was practiced within family groups as a sign of respect for deceased elders. And like ritual head-shrinking, it was also often believed to capture the spirit of a defeated foe.

Fear has always worked as a powerful social force, and thus cannibalism was also employed as a means to instill fear and respect from potential adversaries. In his 1999 book The Anthropology of Cannibalism, Laurence R. Goldman summed up this rationale based on his study of cannibalism around the world: "Cannibalism was often a component of inter-group warfare, while some groups also used cannibalism as a form of social control over individuals or groups within their own society. Notions of intimidation or revenge played a role in most of these cases, with torture, mutilation, and other indignities often accompanying the cannibalism."

As strange or repugnant as these practices may seem to many of us today, they served as important elements in creating cohesive societies with better chances to survive in an extremely challenging environment.

Likewise, symbols have historically been of great importance in establishing authority and social order, and the items George brought to Chattanooga are perfect examples. While the club could obviously be used as a weapon, its primary purpose was to symbolize the power and authority of a Fijian chief. Similarly, the tapa cloth, which might function as something as ordinary as clothing, could also be hung in the rafters of a god-house to represent the powers of the ancestors, which were thought to pass through the cloth — as a product of the earth — and be transferred to the chief.

But more and more contact from the West eventually led to the rejection of many ancient Fijian customs, and the consequent adoption of new ones. George's great-grandparents were missionaries in Fiji whose work there contributed to this tide of cultural change. What George's photograph captures so well is an emblematic moment from that period: Ratu Meli, a chief who had converted to Christianity, stands proudly holding his ceremonial club, posing with missionaries to whom he later made a gift of that potent symbol.

The Anthropology of Cannibalism, by Laurence R. Goldman. Bergin & Garvey, 1999.

About the Author John Buxton
John Buxton has been a featured ANTIQUES ROADSHOW appraiser specializing in tribal art since 1997. He runs Art Trak, Inc., an art services computer network based in Dallas, Texas.
More from PBS