Is This Pot an Ordinary Jardinière or a Genuine George Ohr? 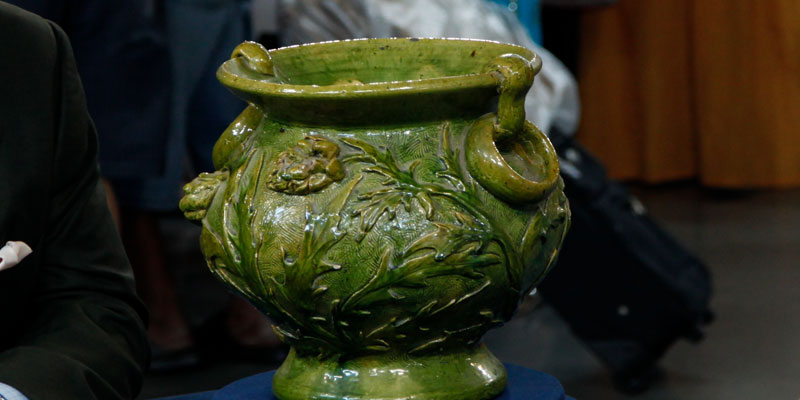 Read the story of how a jardinière by a famous potter became a family treasure.

When Teresa, a ROADSHOW guest from New Orleans, brought a large green jardinière to the appraisal event in Biloxi in July 2010, appraiser David Rago had a hunch that it was a special piece.

"We'll have to get back to you on a final answer with this," Rago told in Biloxi. "But I have a really good feeling about this, and I'm not wasting your time."

Rago suspected that the jardinière was from the early days of the New Orleans Art Pottery Company, a predecessor even to the famed Newcomb College works of the early 20th century.

What is New Orleans Art Pottery?

"New Orleans Art Pottery was a very short-lived operation," Rago explained on air. "Its roots were in 1885. A teacher, Ellsworth Woodward, went to New Orleans to teach the ladies how to do decorative arts and started the Women's Decorative Art League in 1885. In '86, on Baronne Street, he opened up a pottery and brought in two potters, Joseph Meyers and the famous George Ohr."

However, New Orleans Art Pottery was not financially successful and closed for business during the 1890s. Ohr moved back to Mississippi and went on to become known as the "Mad Potter of Biloxi" because of his eccentric style, both in life and work.

Because of its brief run, pieces from that era, especially New Orleans Art Pottery, are rare and valuable. Rago had a gut feeling but needed to be sure.

"I've handled perhaps a dozen of their pieces over the years and there was just something that felt 'right' about it," Rago said when we followed up with him after the show. "You seldom see pieces that are at once so crude and sophisticated, which certainly describes George Ohr, who probably had a hand in making it."

An Encounter with George?

Teresa is unsure of exactly how the jardinière came into her family's possession, but she can trace its roots back to her grandparents. Teresa's grandmother was the ninth of 12 children in Italy and arrived in the United States in the late 1800s. It was in New Orleans that she met her future husband, Theresa's grandfather.

"My grandfather was a fruit and produce man in the French Quarter, in the French market, and my grandmother sewed and did seamstress work," Teresa said. "So that's why I figure that [Ohr] came into contact with [them]."

So how did this merchant and seamstress end up with a jardinière made by George Ohr?

"It had to be bartered or traded for," Teresa said. "That's the only thing I can figure, because my grandparents didn't have anything. ... So it had to be something that came from George into our family, either traded or bartered for. Clothes or food — produce."

When Teresa was growing up, the jardinière was used as a vase and sat on a pedestal. After her mother's death, Teresa acquired the pot and kept it on the floor, under a table.

"After I found out what it was and how valuable it was, though" she said, "I was so worried that it would get broken."

Shortly after the ROADSHOW event in Biloxi, Rago followed up to confirm his auction estimate of $10,000-$15,000.

"I sent a photo to a colleague in New Orleans for a second opinion," he told us recently. "She felt exactly as I did. I was contacted by the owner after we left the taping, but we never connected."

Meanwhile, Teresa was doing some research on her own, shopping the jardinière around to different auction houses in New Orleans.

"I was excited and wanted to know more about it," she said. "That's why I contacted the first auction house, and he had people from Newcomb come in to look at it. They verified that it was a George Ohr piece and wanted to put it in the catalogue for $2,500. I said, 'No, I don't think so. I think you need to go a little bit more than that.'"

Despite the setback, Teresa was not discouraged and continued to search for an auction estimate that satisfied her. Finally, in October, she struck gold.

"I brought it to the St. Charles Auction House," Teresa said. "They were really good to me; they didn't charge me insurance or anything." Teresa ended up getting just under $10,000 for the piece, about $9,800 after fees.

Rago was equally happy with the result.

"I was pleased to see the consignors get the right value for it," he said. "I am certain their day at the ROADSHOW taping is something they'll never forget."

About the Author Josh Mellits
More from PBS