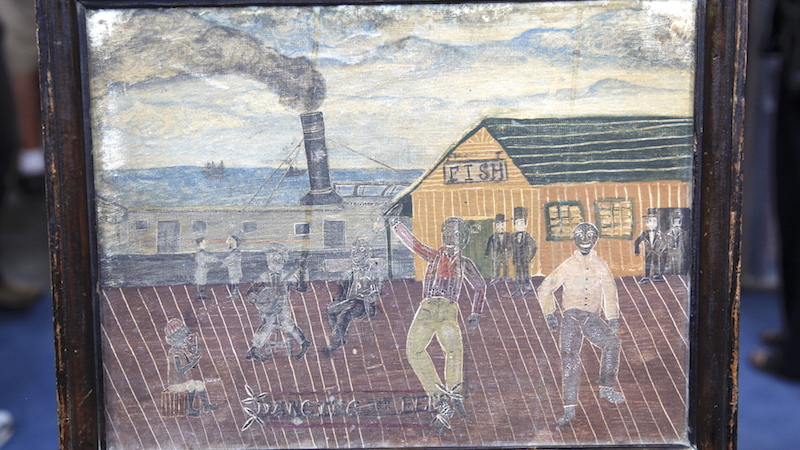 Carole, the owner of the "Dancing for Eels" painting, told appraiser Nancyt Druckman she had found it lying neglected on the floor of a Washington, D.C., antiques store.
Support provided by: Learn more

The scene depicted in Dancing for Eels, ca. 1885, is so charming and idiosyncratic that it might be natural to assume it was the expression of a single painter's whimsy: With musicians and bystanders in the background, two African American men dance in a fish market. The title, painted across the bottom of the canvas, tells us what they are doing, though that wasn't much help to Carole, who found the painting lying neglected among some decrepit old frames on the floor of an antiques store in Washington, D.C. "I saw these two African American men 'dancing for eels' and I thought, are they dancing for food? For eels? I didn't know that was a thing." But the image was familiar to ROADSHOW appraiser Nancy Druckman — she'd seen versions of it before — who, at the Washington, D.C., ROADSHOW in August 2010, estimated the auction value of Carole's canvas at $6,000 to $9,000. 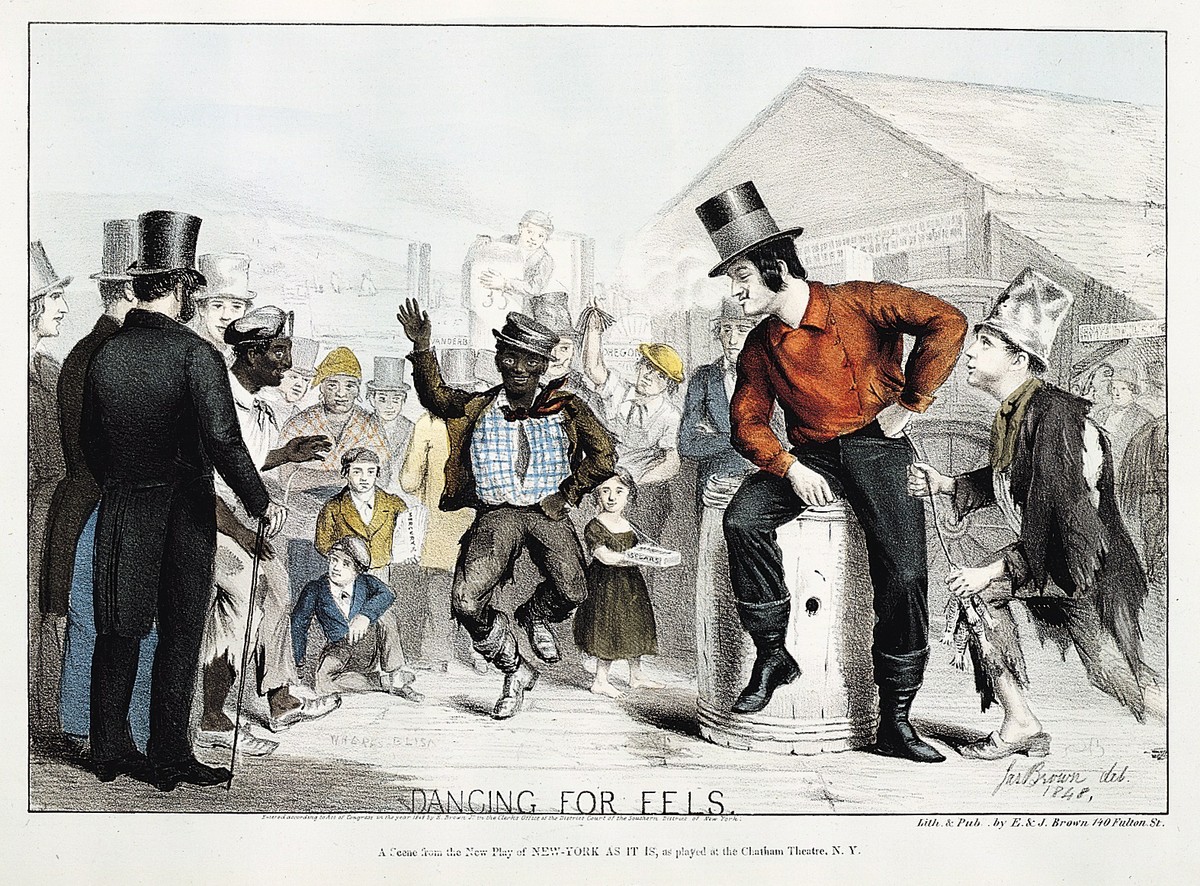 The first version of Dancing for Eels, says Druckman, seems to have been a folk drawing from the 1820s that depicted two African American men dancing at New York City's Catharine Fish Market, a crossroads and meeting place for African Americans in the region. At the time, slavery was being abolished across the northern states, but it was a gradual process. New Jersey had enacted a law in 1804 that freed all African Americans born subsequent to passage; but as late as 1860, the state would still be home to a number of slaves. New York, on the other hand, abolished slavery entirely in 1827. Dancing for Eels shows the three communities of slaves, freedmen, and whites coming into contact as their places in society are beginning to change.

After traveling into the city from farms in New Jersey, says Druckman, slaves would sell their produce at the Bear Market and meet up with free New Yorkers to socialize and gamble. Afterward, the slaves and freedmen would head over to the nearby Catharine Fish Market to dance and play music for whites in exchange for fresh fish or eels. The sight of men dancing for eels at Catharine Market became familiar enough to New Yorkers that, over the course of the 19th century, it served as source material for a number of lithographs and political cartoons. Carole's piece of folk art brings the life cycle of the image full circle, as it is almost certainly an interpretation of a lithograph that was itself an interpretation of the original piece of folk art.

"The painting is such a sweet thing," says Druckman, who finds in the vibrant style of the unknown artist an energetic, raw beauty. "He probably would have seen zillions of lithographs of this composition; he's doing his own rendition of it."

Had the painter been a formally trained artist — such as one of the lithographers who so precisely etched and colored hundreds of professional (and generic) images during the period — he would have felt bound by his training to produce a naturalistic representation of the scene. But the artist responsible for Carole's painting was free of these constraints.

"The lines in the dock are really exaggerated," Druckman points out, "almost like pin-striping. The way he's depicted these lines gives you a sense of the energy and the rhythm of the dancers. So you're getting a visual-acoustical kind of combination. If he'd been trained, the planking would have just looked like planking. The extra surge of sound would be lost. That's exactly the kind of thing that makes folk art so interesting — the ability to use visual elements in an unrestricted way."

The racial content is a little more difficult to parse. When she first saw the painting in the antiques store, Carole was attracted to its color palette, naïve joyfulness and obvious age. But beneath the scene of black men smiling and dancing for food were undercurrents that caused her to hesitate.

"I don't collect that kind of thing," she says. "But the men in the painting, I realized, are not in blackface; they're just black men who've been given the simple treatment of folk art — though there was something reminiscent of blackface. So there's this complexity to it. But I read up on the background somewhat, and I don't see it with the same degree of negativity as I did when I picked it up off the floor."

The men in the painting, says Carole, are certainly dancing for food, but they also seem to be dancing for pleasure. There is no sense of the men being forced to dance, and the only whites in the painting are well in the background. As she looked more deeply into the history of the painting, Carole learned that Catharine Market was a place where black and white culture mingled, perhaps not as freely as they do today, but not necessarily under a pall of racism. As slaves and freedmen danced for eels, they were keeping alive a culture of movement and dance that would survive slavery, adaptation, and co-optation by minstrels in blackface, and the Jim Crow regime, finally to be incorporated into the dance culture of the most globally successful form of pop music of the last few decades, rap and hip-hop.

On the other hand, Carole points out, since the men in the painting are looking directly out of the canvas and into the invisible foreground, it's possible to read Dancing for Eels as having been painted from the perspective of someone who has paid the men to dance, in which case the reading changes somewhat.

"So there's some ambiguity," she says.

The ambiguity is what allows Dancing for Eels to be a magnifying glass that enlarges the intricate weaving of African American culture into a country that was just beginning to view blacks as fully human. We may not be able to escape seeing the painting as political, but the dancing men do not seem to be symbols in a racial narrative. They are simply dancing. A trained artist who'd come up through some academy of art may have created a superior illusion of three-dimensional space, but he would have felt a temptation to flatten the cultural image into a moral.

Such a lithograph, says Druckman, despite expertly constructed visual trickery for rendering figures in space and creating depth, would be worth nowhere near the $6,000 to $9,000 she estimates Dancing for Eels, with its instinctive blending of the visual and the aural, would bring at auction.

"It's got this off-beat quality to it — a folkiness that enhances the value. A lithograph would be worth something like $38," she says, "and not only because it would have been mass-produced." 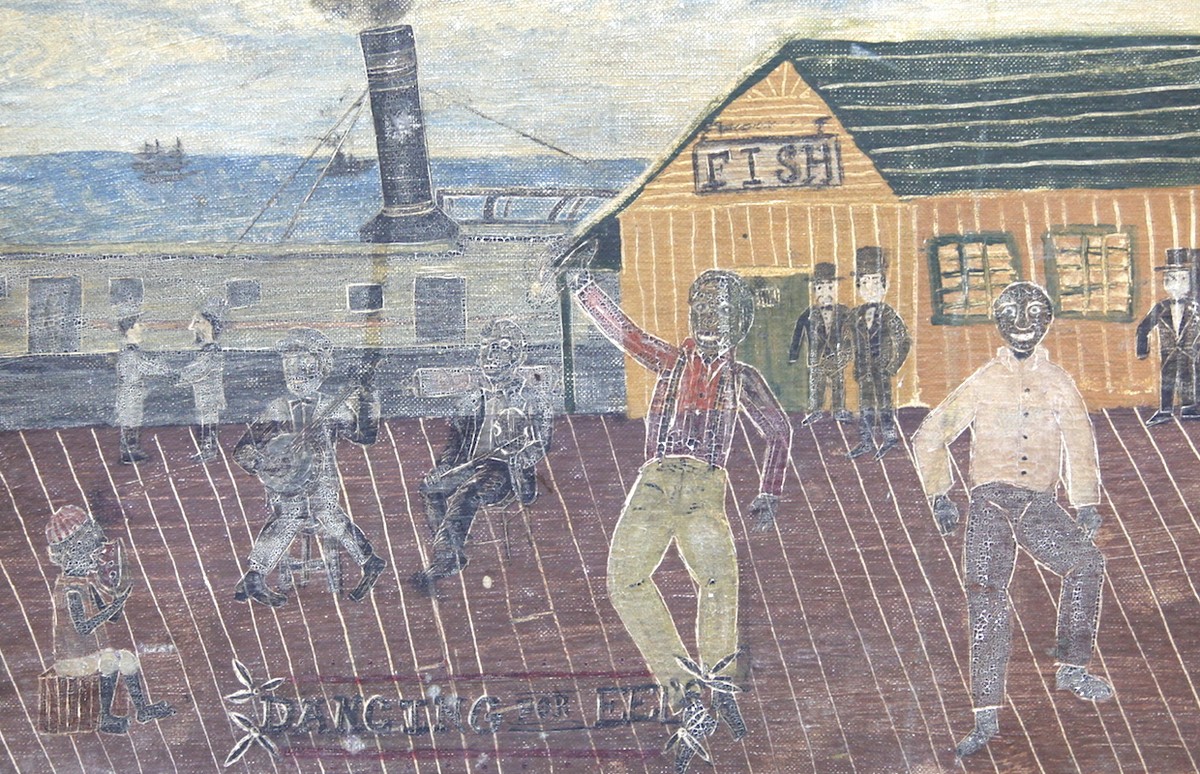 "The lines in the dock are really exaggerated," Druckman points out, "almost like pin-striping. The way he's depicted these lines gives you a sense of the energy and the rhythm of the dancers. So you're getting a visual-acoustical kind of combination."