A Corpus Christi guest relives her experiences as a diehard Beatles fan in late-60s London, and shares a never-before-heard recording she made of Paul McCartney!

For those of us who weren't alive during Beatlemania, it takes an effort of the imagination to grasp how unbearably exciting it all must have been. To say that the Beatles were commercial and artistic conquerors of a kind unprecedented in human history sounds hyperbolic, but who else compares? Prior to the middle of the 20th century, it was technologically impossible to be world-famous; the phenomenon of fame itself was fairly new. Elvis paved the way in that regard, but it's tough to make the case that his artistry approached that of the Beatles.

In 1967, with the Beatles in the most productive period of their career, Leslie, now of San Angelo, Texas, visited John Lennon and Paul McCartney in their homes, securing Lennon's signature in his just-released collection of poetry, The Penguin John Lennon, as well as a tape recording, never publicly released, of McCartney reading one of Lennon's poems. Thanks to the autograph's watertight provenance, Laura Woolley, of Los Angeles' Collector's Lab, estimates the book would bring in between $3,000 and $5,000 at auction. (You can watch Woolley's appraisal at the top of this page.)

"I brought a heavy reel-to-reel tape recorder," recounts Leslie. "[Paul] was fine with it! I asked loads of questions, interviewing him, and as I was going through my stuff I had this book of John's. And he picked it up and started reading from it."

With the Sixties Comes a "Rumbling"

As a doctor's daughter growing up in the 1950s, Leslie was accustomed to what she calls a "black and white" world. With a few exceptions, most of the music that was popular was performed by adults, for adults. Frank Sinatra, who'd become popular in the years following World War II, was enjoying a resurgence, and dismissed rock-and-roll as a degraded music that was "sung, played, and written for the most part by cretinous goons." When John Kennedy was elected in 1960, Leslie says, the mood brightened somewhat. 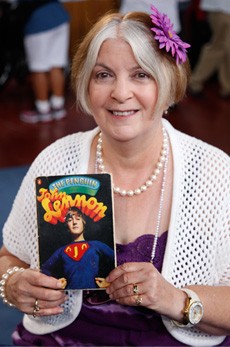 During her August 2012 visit to the Corpus Christi ROADSHOW, Leslie posed with her pride and joy ― a copy of "The Penguin John Lennon," autographed by the Beatle himself.

"We had our young president," she says, "but then he was killed. Everything was gloomy. But all of a sudden, with the Beatles, you had this music, and it was young, and it was fun, and it was something we could follow and look up to. It changed the way we felt. They were English, but they were in the right place at the right time for our country."

The "rumbling," as Leslie puts it, started at the end of 1963. When the Beatles made their epochal appearance on the Ed Sullivan show in February of 1964, Leslie benefited from a bit of good luck. One of her father's patients was an executive at CBS, and he made sure Leslie had a ticket to the show. After that, Leslie made up her mind: She'd graduate high school and then, somehow, she would go to England to meet the Beatles. It helped the band's success that they were cute and clever, but for so many fans, Leslie included, their magnetism was stranger and more intensely personal than something as ordinary as sex appeal. 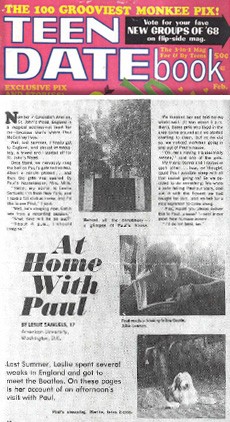 Following her memorable 1967 sojourn in London, Leslie wrote an article for "Teen Datebook" magazine recounting her visit to Paul McCartney's house. (Image courtesy of the owner)

"I was so young and innocent at the time," she says, "so there was nothing sexual about it at all. I wanted to play guitar with them, make music with them. Does that sound crazy?"

First she had to finish high school. To bide her time and make the necessary contacts, Leslie organized a Beatles fan-club chapter, stuffing envelopes and generally acting as an unpaid employee for Brian Epstein's management team. In 1967, a month before Leslie planned to leave for England, critics were wondering if the Beatles had finally run out of inspiration. Then they released Sgt. Pepper's Lonely Hearts Club Band. One of the album's most important cuts, "She's Leaving Home," resonated powerfully with Leslie's plans.

Leslie arrived at McCartney's house that summer with a bag of gifts from fan-club members ― sketches, poems, trinkets, love letters, and a bouquet of flowers. There was a crowd of girls outside the gate; no one was going in or out except a team of electricians doing repair work. Leslie attached a note to her flowers: Hi, Paul, I'm president of your New York fan club and I brought gifts. minutes later, the door opened. Which one of you is Leslie?

"I was in his yard for over an hour," she says, "and I brought a heavy reel-to-reel tape recorder. He was fine with it! I asked loads of questions, interviewing him, and as I was going through my stuff I had this book of John's. And he picked it up and started reading from it."

In 1967, Lennon was in his most obscure phase as a lyricist, having grown bored with the straightforward puppy-love lyrics of the Beatles' early records, and moved beyond even the introspection of "Help" and "Nowhere Man." In his abandoning the idea of meaning altogether, Lennon wrote what may be regarded as his most profound group of songs ("A Day in the Life," "I Am the Walrus").

The poem that Paul read that day, "On This Churly Morn," shows Lennon working in the same nonsensical vein, being guided along not by meaning, but by sound, thought-association and even typing mistakes. Though "On This Churly Morn" is not a great poem, its rhythms nonetheless insinuate themselves into the mind. Perhaps its greatest value is that it opens a window onto the artistic process that would power one of our greatest songwriter's greatest works. (You can listen to Leslie's recording at the bottom of this page.)

After recording McCartney's impromptu reading Leslie took the number 73 bus to the London suburb of Weybridge to meet the Beatles' other front man, the poet himself.

"Everybody said he could be a bit cold, and could be cruel," says Leslie, "but he was amazing. He was warm and nice. I'd seen in the paper that he'd just taken delivery of his psychedelic-painted Rolls Royce. He said, 'You can go sit in it, if you like.' This was like a dream ― but it happened."

Before leaving, Leslie asked Lennon to sign her copy of The Penguin John Lennon, which collected two previous editions of his offbeat, Lewis Carroll-inspired poetry. In the Beatles' 1964 Christmas record, Lennon said of the collection, "It'll be the usual rubbish, but it won't cost much, you see." It's a fair assessment of the poetry's tossed-off quality. Still, it was from John Lennon, Leslie says, "so it was wonderful."

A Fan for Life

Leslie would remain in England into her 30s, and was in the Beatles' outer circle for years. She became a friend particularly of George Harrison, and is preparing to write a book about her experiences. Until then, she has plenty of Beatles memorabilia to sustain her recollections of being a "Beatle Tripper," including her autographed copy of The Penguin John Lennon.

"My dream," she says, "is to thank Sir Paul face to face for his music, the music of my life. He's changed the world and made it a better place. That would make me feel so ... so ... it would complete the circle. Before we all get too old."

LESLIE: Would you like to read something for us?

Knock down ye smallish hooky
Am I the bairly oat?
With all your davey cockey
I'll always keep afloat.'