A Portrait of Edith 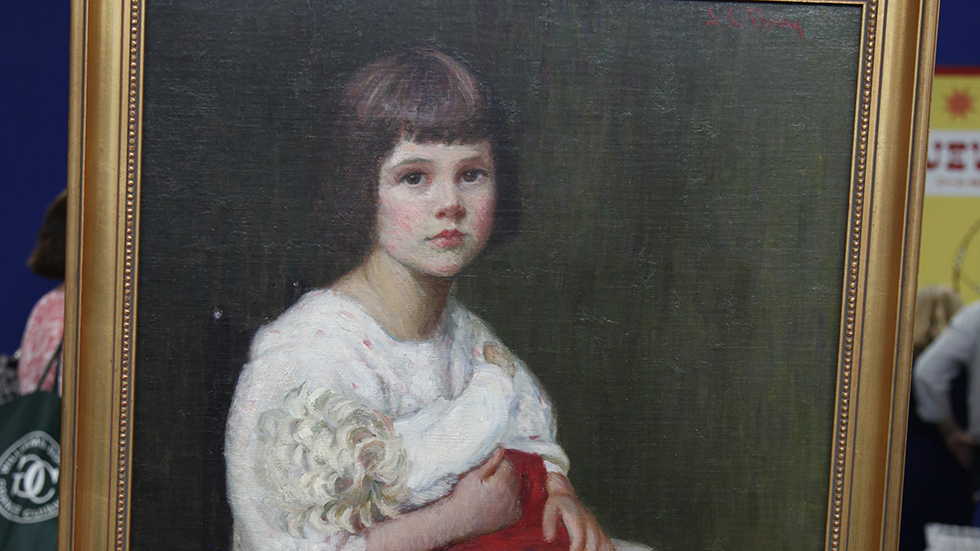 After the Boston ROADSHOW event, the owners share a fascinating letter from a descendent of Lilla Cabot Perry confirming that Edith Agnes Grew is the girl in the painting.

When two sisters came to the Boston ANTIQUES ROADSHOW event in June 2012 with an oil painting of a pretty young girl sitting on a chair holding a doll, they told appraiser Meredith Hilferty, of Rago Arts & Auction Center in Lambertville, New Jersey, that they'd purchased it together for $500 at a sale in 1986. They said their grandmother and parents had always encouraged their fondness for old things and for finding "little treasures" at yard sales. Only girls themselves at the time, they had fallen in love with the painting's subject matter and didn't know that the artist, Lilla Cabot Perry, was well known or of any significance.

Later on they came to understand that the portrait was of very high quality and that Lilla Cabot Perry was an important early-20th-century art figure, both for her own work, and as a friend of Claude Monet and early proponent of French Impressionism in America.

Last November, while checking the background of this story in preparation for airing the appraisal, ROADSHOW contacted the painting's owners again to confirm how they knew for sure that the girl in the picture is Perry's granddaughter, Edith, as they said on-air. In reply, they provided us with a fascinating letter showing correspondence between their family and a Mrs. Elsie Lyon, who was Edith's younger sister. The correspondence is re-printed here for the first time, with the owners' permission.

We have recently been contacted by a collector in the Boston area who owns a painting by Lilla Cabot Perry. He is most anxious to identify the subject if at all possible. I am taking the liberty of forwarding you the polaroids he sent us in the hope that Mrs. Lyon might recognize the sitter.


Letter from Elsie Lyon to M.P. Naud in response to her inquiry about the Lilla Cabot Perry painting

This letter arrived today, and we are off to Washington tomorrow morning for the opening of the Women's Museum ― so I shall answer quickly. This picture (which I don't remember ever having seen, although we have a standing one of the same period) is of my eldest sister, Edith Agnes Grew, born in Giverny (where my mother had gone to be near her mother, Lilla Cabot Perry, who was in Giverny, to be near Monet, who was a good friend) on September 24th, 1906 ― alas she died of Scarlet Fever in Venice on April 12, 1924, at the age of 17 ― In this picture, she is holding her doll, Caroline, whom she called, at that tender age, "Calloline" ― I'm not sure how old she was, but I think four years old in this picture, although she looks older.

If there were any chance of having copies of these two charming Polaroids, I'd be deeply grateful! As we don't have this picture in the family and don't remember having seen it, it would be wonderful to have photographs of it. I wonder when it was bought; needless to say, we three sisters adored Edith, and would treasure these photos of her picture. Do you think it would be possible? Id be happy to pay for them.

[P.S.] If the owner ever comes to this area, and would like to see our picture of Edith, I'd be happy to have him call us.

See the full segment page in our Appraisal Archive