A Tiffany Presentation Pitcher for a Family Hero

Over the course of his steamboating career in the mid-19th century, Captain William H. Laughton saved 11 lives. One of these heroic efforts rose to the surface at the ANTIQUES ROADSHOW event in Rapid City, South Dakota, in the form of Tiffany & Company silver.

Depicted on an ornate presentation pitcher was the tale of Laughton's courageous dive into the Mississippi River in April, 1854. Heading northbound, the Nominee's trip was interrupted when a boy fell off the upper deck of the steamboat. Laughton jumped overboard, swimming close to a mile as the boat turned around to fetch them. According to documentation that the guest brought to Rapid City, the parents presented Laughton with a monetary gift, which he refused, "asserting that he was only doing his duty." When the family returned to its native New York, they still felt obliged to honor Laughton's selfless act and therefore had the relatively up-and-coming New York City-based Tiffany & Co. cast a silver presentation pitcher to commemorate the event. Ever since Laughton accepted the gift, it has been a family heirloom, passed down from generation to generation. "This is what has been known in our family as the Tiffany pitcher," the ROADSHOW guest said. 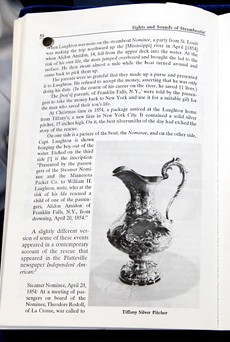 An excerpt from "Sights & Sounds of Steamboating: The Life and Times of Captain William H. Laughton." 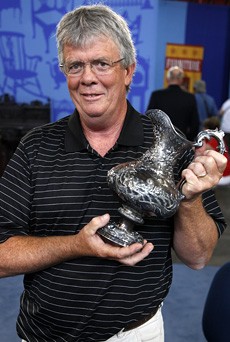 The guest holding his family heirloom, the Tiffany presentation pitcher.

At the time that this pitcher was made, Tiffany & Co. was growing as a silver company. In 1851, Tiffany began to use English Sterling standard (92 percent pure) and was the first American firm to do so. Rapid expansion required much output, so the company used many different silversmiths, whose marks could be found on their pieces. In this appraisal, Reid Dunavant reveals that the mark has been obscured by a slight bend in the foot. Although the specific maker cannot be determined in this instance, the piece's provenance and dating provided enough information to craft an auction estimate on the item of $4,000 to $5,000. Presentation silver is typically associated with sporting events, marriages, and other milestones. For example, in Cincinnati last summer, Dunavant appraised a 1908 Tiffany & Co. equestrian humidor, a silver presentation box, for $30,000 to $40,000.

But this Tiffany pitcher represents more than just a regular achievement; it depicts an act of heroism using detailed design on multiple surfaces of the pitcher. On one side, there is the actual scene of Laughton saving the boat from the water, with an image of the steamboat Nominee on the other. So although this piece of silver is showing some signs of age in its tarnished surfaces, its moral core persists through family history.