In 1798, two young Philadelphia socialites named Lucy Breck and Elizabeth Wescott left high-society to spend the summer in Sweetbriar. By September, both young women were dead. This is the story of what happened.

In 1798, two young socialites named Lucy Breck and Elizabeth Wescott left high-society Philadelphia to spend the summer in Sweetbriar, the Breck family's summerhouse on the Schuylkill River. By September, both young women were dead, having fallen victim on the same day to the very hemorrhagic fever they'd fled the city to escape. In their early deaths, Breck and Wescott joined tens of thousands of Philadelphians who'd succumbed to yellow fever in the previous five years. But it was puzzling, especially to the doctors who incorrectly thought that they understood the disease, that the pair should have fallen ill in the country, so far away from the city where the disease was rampant. The two devoted friends were buried in the same grave.

After their deaths, the noted Philadelphia miniaturist James Peale painted a memorial brooch featuring Wescott's likeness encased together with a braid of her hair. At the Rochester ROADSHOW in the summer of 1998, appraiser Carl Crossman estimated that, owing to Peale's eminence as an artist, the brooch would command as much as $12,000 at auction, and in today's market, some 15 years on, that estimate has increased to $18,000. 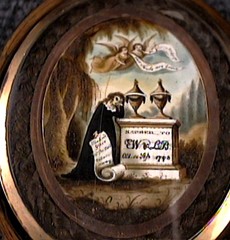 The reverse of the miniature depicts a somber memorial scene showing Eliza's initials together with those of her best friend Lucy Breck, who also died of the yellow fever outbreak. The scroll held by the figure leaning against the monument reads "The Lord giveth and the Lord taketh away."

Yellow fever is an uncommon disease in the modern United States, but in the 18th and 19th centuries, American cities like New Orleans, New York, and Philadelphia saw frequent outbreaks. The 1798 epidemic that killed Breck and Wescott was not an isolated event, not even in Philadelphia. In fact, it was merely the continuation of an epidemic that had begun five years before. 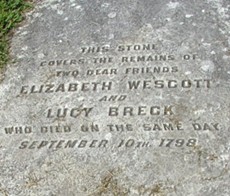 Friends to the end, Eliza and Lucy also share a gravestone, which reads "This stone covers the remains of two dear friends Elizabeth Wescott and Lucy Breck who died on the same day September 10th, 1798."

In 1793, Philadelphia was the nation's capital and most populous city. It was also compact: Most of its 50,000 inhabitants lived within a few blocks of a busy harbor — perfect conditions for the rapid spread of disease. In the spring, ships bearing some two thousand French refugees from the slave uprising in Haiti began to appear in the ports. Within a few months, one of the immigrants was dead from an untreatable fever that began with aches and pains then progressed to jaundice and the vomiting of blood. This final symptom gives the disease its Spanish name, vomito negro; its English name refers to the skin discoloration caused by liver damage.

The disease spread quickly. By fall, the dead numbered around 5,000. Doctors blamed whatever was at hand (such as putrid coffee) and sought to control the disease with what amounted to magic (igniting massive explosions in the street). A tenth of the population died. In an attempt to escape the epidemic, another two-fifths fled the city, including President Washington. For those who could afford it, leaving the city in summer would become customary.

Throughout, the city's doctors responded with that era's mixture of abject perplexity and unshakeable confidence in cruel treatments that could not possibly help, and were guaranteed to harm; the style has come to be known as "heroic medicine," a phrase that seems to refer as much to the boldness of the therapies as to the courage required of patients undergoing them. Doctors burned patients to raise blisters, gave them emetics to induce vomiting, cut them open to bleed them, then debated the relative merits of bleeding as compared to the administration of calomel, a poisonous compound that contained so much mercury that it caused the hair and teeth to fall out (when it did not lead to insanity). Luckier patients might be prescribed wine ("claret and Rhenish"), the variety depending on the severity of symptoms ("Lisbon or Madeira diluted with rich lemonade").

As fever continued to ravage the city, more observant physicians could not help but notice that the heroic treatments of bleeding and forced vomiting yielded the same outcomes as no treatment at all. What was more, patterns of infection suggested that the disease did not spread from person to person, but according to the season: Summer was the "sickly season," winter was safe. A doctor-in-training named Stubbins Ffirth registered these doubts more deeply than most. To prove that yellow fever did not spread from person to person, and therefore that doctors understood almost nothing of the disease, Ffirth performed such legitimately heroic acts as ingesting the vomit of sick patients. When he failed to fall ill after increasingly grotesque, risky experiments upon himself, Ffirth regarded the question as settled: Yellow fever was not spread by interpersonal contact.

A century later, in 1881, a Cuban doctor named Carlos Finlay discovered the true vector for yellow fever. It was not contact among human beings that was to blame, he argued, but the bite of the Aegypti mosquito, accidentally imported from Africa aboard slave ships. Around the same time, Theodore Roosevelt's prized Panama Canal project was beleaguered by yellow fever, and on the verge of collapse. Some 85 percent of canal workers were spending time in the hospital, sick with yellow fever, malaria, or some other malady. In other circumstances, Finlay's idea would have fallen on stony ground. No disease had been attributed to a mosquito before, and the Roosevelt administration largely held to the "tropical miasma" theory of transmission. But Roosevelt was in a suggestible frame of mind. He approved a plan to wage war on the aegypti mosquito, deploying a "Mosquito Brigade," armed with tons of fumigant, to spray every private dwelling in the country. Within a year, the canal project's chief medical officer had succeeded in stopping the disease. There would be no more yellow fever fatalities for the rest of the project's duration. Thanks to an eradication program in the 1960s, the Aegypti mosquito is far less prevalent in the United States than it used to be, and today a simple vaccine makes its bite merely an annoyance.

The 1790s were an unlucky time to get sick. Desperately speculative public-health interventions did no good, nor did commonsense practices like cleansing affected areas with fresh water, since the aegypti mosquito flourishes in clean water. The deaths of Lucy Breck and Elizabeth Wescott were mysteries to the doctors of the day. No one around the young women was sick, and they had not been exposed to any foul miasmas. They had not even consumed any expired coffee. But a single mosquito, accidentally sealed up in a hat bag or unnoticed in the lining of a frock, would have been enough to do them in.

The Peale brooch, seen in this light, is more than a memorial to two young women, long forgotten, who met a tragic and confounding end. It is a reminder of progress.