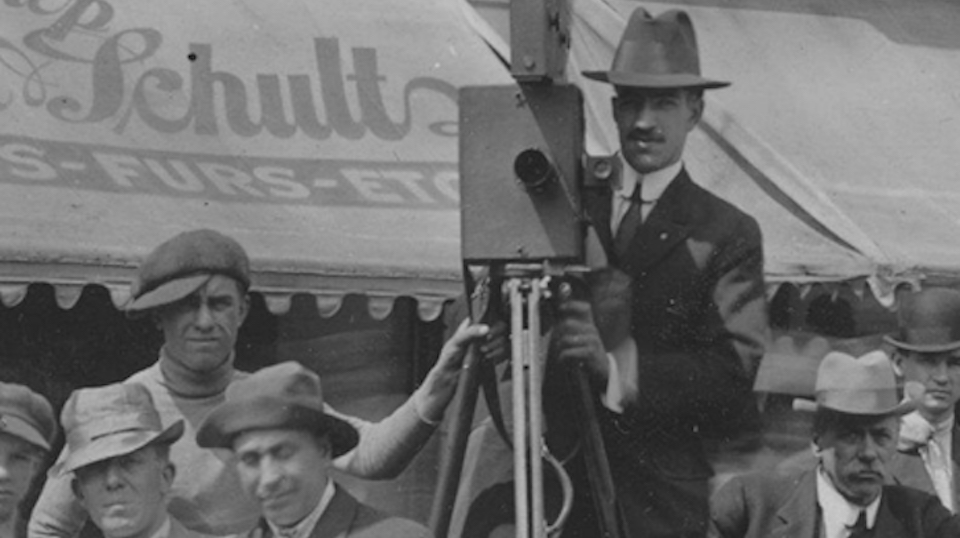 Born in Middleburg, Florida, in 1891, Richard Norman was a visionary filmmaker who found success in the 1910s producing local versions of his feature films in various towns across the Midwest. In the 1920s, Norman produced several successful "race films" featuring all-Black casts. (Image courtesy of Norman Studios.)
Support provided by: Learn more

Norman travelled across the Midwest and Florida to various towns, cast the local white citizens in starring roles, and filmed the same script over and over again.

Reels of the films The Green Eyed Monster and The Wrecker

Richard Norman made a number of silent feature films between 1915 and 1928. The Green Eyed Monster, a film with an all African-American cast, was released in 1919. The film involves a love triangle (two men fight for the love of a good woman), competition over a lucrative business contract and a great train crash. Film canisters containing the reels for The Green Eyed Monster have not been seen in several decades.

Learn more about Norman Studios silent film "The Wrecker" in this bonus video from Jacksonville, Hour 1.

Norman produced a number of versions of his film The Wrecker (which he also called The Green Eyed Monster and The Man at the Throttle) from 1916 to 1919, which had essentially the same plot as the 1919 version of The Green Eyed Monster. Norman travelled across the Midwest and Florida to various towns, cast the local white citizens in starring roles, and filmed the same script over and over again. The townspeople were invited to view the movie at the local theater, which presumably enticed a large, paying audience to watch themselves, their friends and family up on the silver screen.

The Wrecker -- Richard Norman produced a number of versions of his feature film “The Wrecker” between 1916-1919. (Image courtesy of Norman Studios.) "Thrills! Action! Punch!"-- Each version of “The Wrecker,” sometimes billed as “The Green Eyed Monster” or “The Man at the Throttle,” used the same script, with the same three plot ingredients: a love triangle, a high-profile business contract and a train crash. (Image courtesy of the Lilly Library, Indiana University.) A Program from a Local Production--Norman travelled across the Midwest and Florida to various towns, cast the local white citizens in starring roles, and filmed the same script over and over again. Each production culminated in a showing at a local movie theater. “The Wrecker” was filmed in Illinois (Quincy, Decatur, Aurora, Carbondale, Ottawa, LaSalle and Murphysboro), in Iowa (Little Rock and Altoona), in Oklahoma (Oklahoma City and Tulsa), in Michigan (Traverse City, St. Joseph and Benton Harbor), in Alabama (Mobile and Montgomery), and in Florida (Gainesville and Pensacola). It was also filmed in Brunswick, Indiana, in Marinette-Menominee, Wisconsin, in Columbus, Georgia, and in Columbia, South Carolina. (Image courtesy of the Lilly Library, Indiana University.) "The Green Eyed Monster" -- In 1919, Richard Norman expanded his vision to include African-American audiences, and directed this version of “The Wrecker” featuring Black actors. (Image courtesy of the Black Film Center/Archive, Indiana University.) A Still from the Film -- Norman first attempted to market his new production of “The Green Eyed Monster” as a comedy, but re-edited when he found that African American audiences were much more drawn to a dramatic tale that rose above racial stereotypes. (Image courtesy of Black Film Center/Archive, Indiana University) Steve "Peg" Reynolds -- “The Green Eyed Monster” also served as the film debut of Steve “Peg" Reynolds, a longtime friend of Norman’s who went on to appear in all of the director’s "race films," as they were called at the time. (Image courtesy of Black Film Center/Archive, Indiana University.) "The Flying Ace" -- In 1926, Norman Studios produced an “airplane thriller” inspired by the life of Bessie Coleman, America’s first Black female licensed pilot. (Image courtesy of Norman Studios.) Norman's Legacy -- Richard Norman was an accomplished filmmaker who made some of America's earliest movies depicting African Americans in a positive, non-stereotypical manner. Image courtesy of Norman Studios.
About the Author Antiques Roadshow
More from PBS