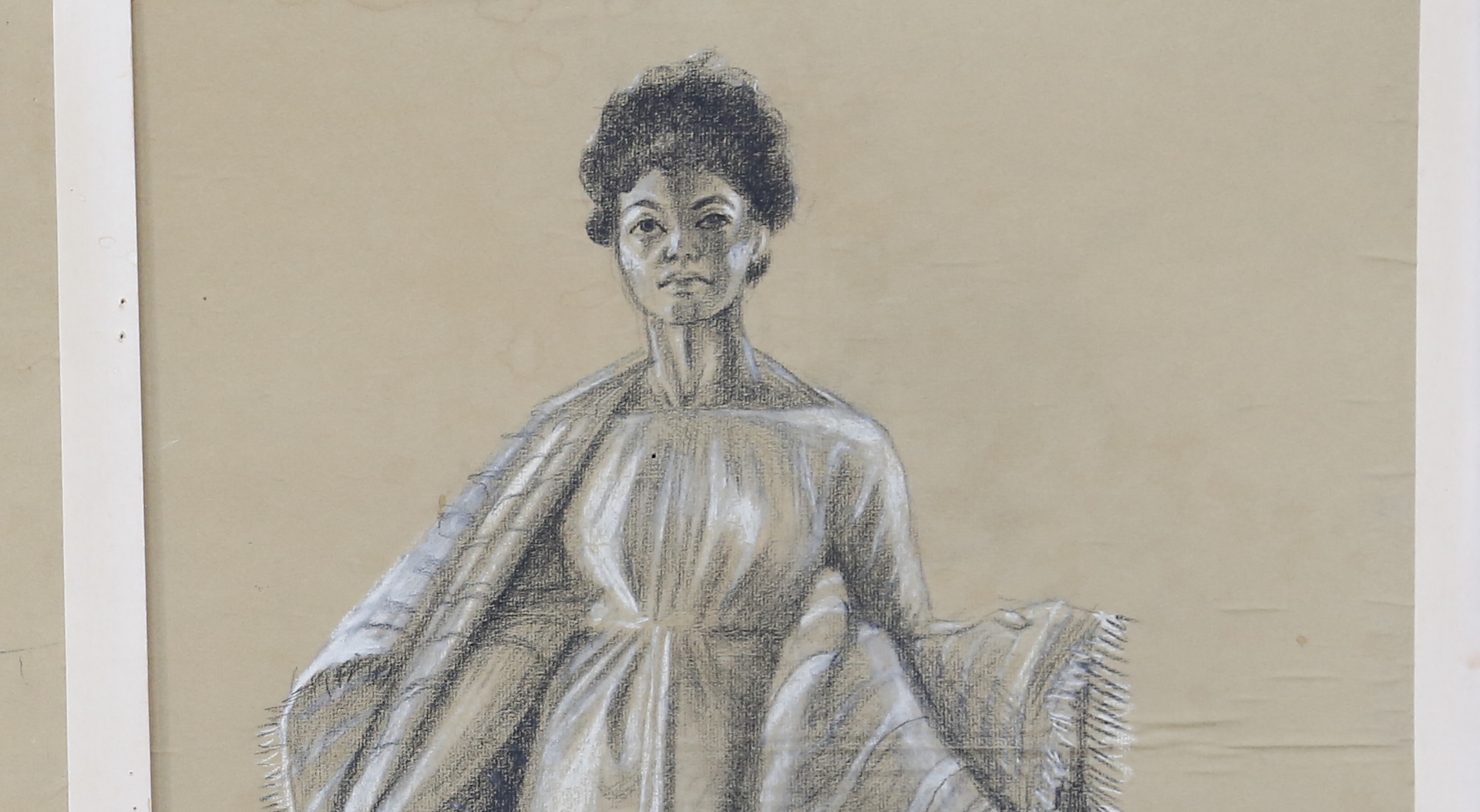 The pair of John Biggers' charcoal drawings depict a woman from front and back. She is wearing a garment whose style probably recalls a woman he encountered while on a UNESCO-sponsored trip to western Africa in the late 1950s with his wife, Hazel.
Support provided by: Learn more

"He's my Uncle John, as I know him," said Henry when he recalled the artist, John Thomas Biggers, who drew the subject depicted in the two charcoal drawings he brought to the Baton Rouge ANTIQUES ROADSHOW event in July 2013. "He and my father were classmates in college at Hampton Institute," Henry explained. "This piece was in our house for as long as I've been alive. And the story goes my Uncle John was throwing them out of his garage, and my dad happened to be there and said, 'Well, no, don't throw it away, I'll take it.'"

It is remarkable how Biggers depicts this woman with so much poise and intimacy, so that she becomes a real person and not just the subject of his drawing

When paintings and drawings expert Meredith Hilferty examined the pair of drawings, she gave an auction value range of $12,000 to $18,000, but the question still remained: Who was the woman in the drawing? Was it Biggers' wife, Hazel Hales Biggers, or an African woman he drew during his time in the Western part of the continent in the late 1950s?

To find out more, Henry contacted the one woman who would know the answer to this question: Hazel Hales Biggers, who still resided in Houston, Texas. He had been in her town visiting from Louisiana, so he decided to drop by the home to which he had journeyed to as a young child to learn more about his "Uncle John." 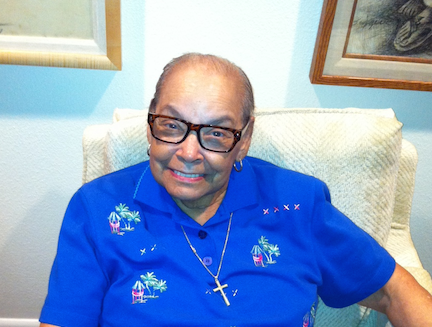 To learn more about the drawings and John Biggers' inspiration for them, Henry visited his widow, Hazel Hales Biggers, at her art-filled home in Houston, Texas. (Image courtesy of guest)

John Thomas Biggers (1924 – 2001) was one of the most significant African American artists of the 20th century, hailing from Gastonia, North Carolina. He attended the Hampton Institute (now Hampton University), where he met his wife, Hazel Hales, and received a doctorate from Pennsylvania State University in 1954. One of his most noteworthy pieces is the mural, "Contribution of Negro Women to Education and Life in America," dedicated at the Blue Triangle YWCA in Houston in 1953, which he completed as part of his doctorate. With Hazel, he spent most of his life in Houston, Texas, appointed head of the art department at Texas Southern University in 1949. Biggers continued painting, sculpting, and educating the next generation of African American artists from this position of prominence in an up-and-coming Houston art scene.

John and Hazel traveled to Africa on a UNESCO-sponsored trip to Ghana, Togo, and the Republic of Benin to study the cultural traditions of Western Africa in 1957, which he considered "the most significant event" in his life, according to an interview conducted in 1975 logged in the Houston Public Library archives. During that visit, they spent most of their time in the country, soaking in as much of the traditional culture as they could. "[The people they encountered] have endured all sorts of historical problems and events…I think this is why they are so beautiful," he said. "They have a universal quality about them…I found, really, a tremendous motivation and some peace."

The charcoal drawings that were presented at ROADSHOW depict a woman from the front and reverse, wearing a garment, which "may have been his decision to include an object specific to the area [Biggers] was visiting," Hilferty said. When Henry asked Hazel Hales Biggers about the figure in the image, she confirmed it was not a depiction of her, but likely a woman they had come across in their visit to Africa. "It makes sense to me that Henry was curious about whether these drawings were of Hazel," Hilferty said. "He portrays the figure in such a familiar way that it could easily have been interpreted as someone that he knew very well."

When Henry toured the house, he was able to see all sorts of works inspired by this trip to Africa. The house was as he remembered: covered in art, filled with sculptures. Despite the "study-like" quality in Henry's drawings, Hilferty noted "It is remarkable how he depicts this woman with so much poise and intimacy, so that she becomes a real person and not just the subject of his drawing." What gave the pieces even more context for Henry was his interaction with Hazel. "Mrs. Biggers remembered me as a little boy and my father," Henry said. When seeing Hazel, he remarked, "She's dynamic! She took me around the house, even showed me the piece he was working on when he passed." So although Hazel explained to Henry in her Houston living room that no, she was not the figure in the drawing, these pieces represent Biggers' passion for revealing the emotion and personality behind his figures in their own history and context. 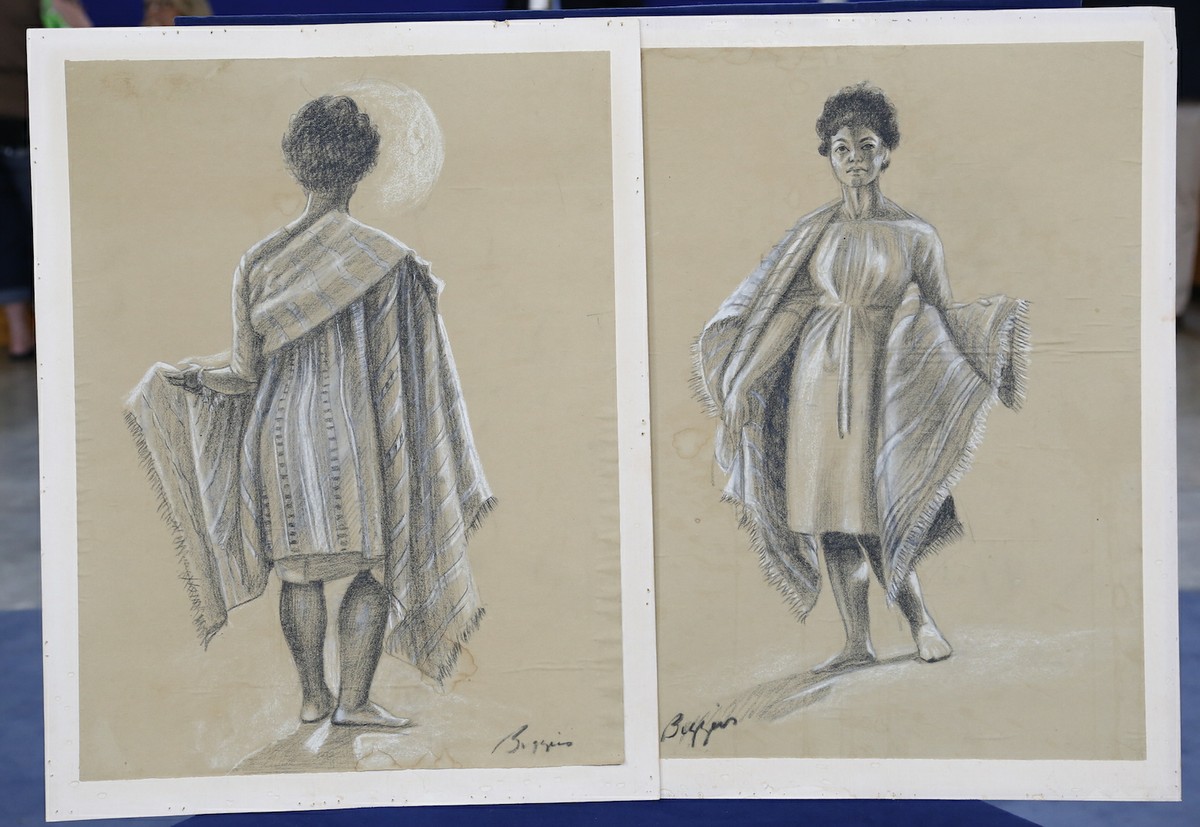 Appraiser Meredith Hilferty discussed these drawings with their owner, Henry, at the 2013 ROADSHOW event in Baton Rouge, Louisiana. Hilferty estimated their current auction value at $12,000 to $18,000.