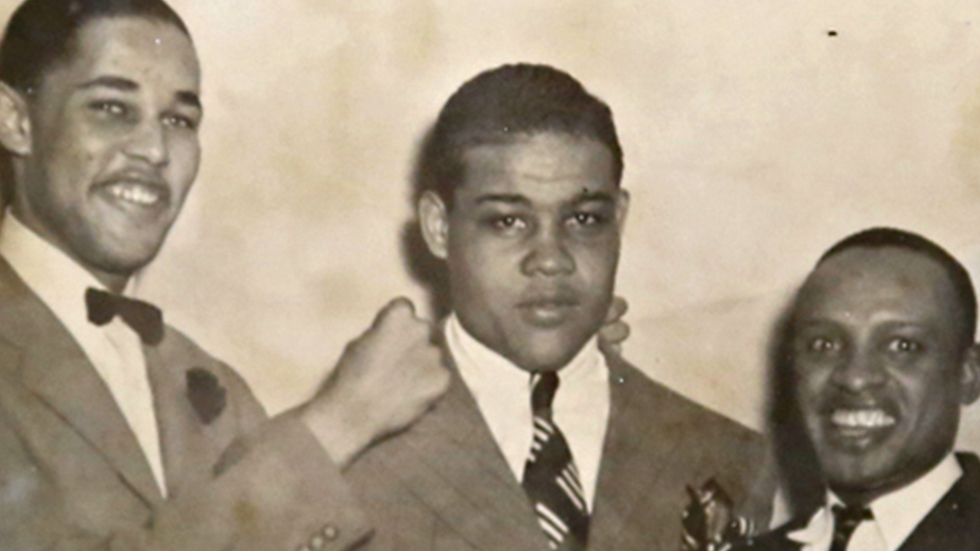 A young Dexter Gordon (left) with Joe Louis and Lionel Hampton, with an inscription to his mother.
Support provided by: Learn more

The story of how one of jazz's great innovators left the country for Copenhagen in 1962. Why did he leave and what effect did this move have on his legacy?

Autographed pictures are a familiar sight at ANTIQUES ROADSHOW. But a group of autographed photos brought by a guest to our June 2013 Anaheim ROADSHOW is special in a number of ways. First of all, the people depicted in the photos are not merely famous, but stars of the first order — Sarah Vaughan and Lionel Hampton — and two flat-out geniuses — Duke Ellington and Billie Holiday. More remarkably, the person to whom the autographs were given was one of these stars' peers, a musical legend in his own right: Dexter Gordon. Los Angeles-based Collectibles expert Laura Woolley, of the Collector's Lab, was surprised to see that such a collection even existed. She estimated that the photos, now in the possession of Gordon's daughter, might bring in at least $15,000 at auction.

In the 1960s, bebop innovator Dexter Gordon gravitated to Copenhagen — a city full of jazz clubs, thick with talent, and a public hungry to hear this new form of American classical music

When Gordon was getting his start in the early 1940s, says jazz writer Scott Yanow, swing was the primary mode of jazz. Count Basie, Duke Ellington and Benny Goodman led big bands that played a melodic, propulsive form of music that was sophisticated and intelligent, but accessible. To pilfer a phrase associated with the bubble-gum music of American Bandstand, swing had a great beat, and you could dance to it. This made swing not only the dominant jazz idiom, but the dominant form of popular music. Basie, Ellington, Goodman and their peers all had big hits.

Gordon was a coveted player in some of the biggest bands of this era, playing alongside Louis Armstrong, Lionel Hampton, Billy Eckstine and others. All the while, he was developing a new style that would elevate his stature, and indeed the jazz form itself. Based on a breakout performance with Gillespie in 1945, Gordon came to be known as the first tenor-saxophone player in a new form of jazz that started to push against some of the boundaries of music itself — bebop.

"In 1945," says Yanow, "Dexter Gordon was the most modern tenor-saxophone player in the world. It took a year at least for anyone else to catch up with him."

The bebop music that Gordon helped pioneer was a direct outgrowth of swing, but to the casual listener the two often sounded nothing alike. Where swing was direct, melodious and danceable, bebop tended to be a bit more cerebral, focused around harmony rather than melody, and perhaps better suited for listening than dancing.

"In swing," says Yanow, "you could hear the main melody, even when players were improvising on it. In bebop, the improvisation was based less on melody than on the chord changes. People would have to hear it a few times to get into it. It was exciting and emotional music, and it swung, but the rhythms were more jagged. If you were into Glenn Miller, you weren't even sure if bebop was music or not."

But to jazz players, the sound of Gordon and bebop was electrifying. In one of jazz's greatest figures, John Coltrane, you can clearly hear Dexter Gordon's influence. "Coltrane came out of Gordon," says Yanow. "Coltrane went much further than that, but that's where he started."

Laura Woolley appraises a group of Dexter Gordon photos at the 2013 ROADSHOW event in Anaheim.

At the same time as the bebop revolution, rock and roll began its ascendance. Work for men like Gordon grew ever harder to find. Add to that the fact that, as the civil rights movement gathered force and race relations in the States grew worse than ever, there seemed to be little reason for a talent like Gordon to stay in the country. So in 1962, he joined many other jazz musicians and embarked for Europe. Many of Gordon's peers gravitated to Copenhagen, Denmark, a city full of jazz clubs, thick with talent, and with a public hungry to hear this new form of American classical music.

In every way imaginable, life in Copenhagen was easier for Gordon. He had access to a deep pool of talented players to collaborate with, many of them on — or nearly on — his level. Plus, Europeans generally viewed jazz musicians as the artists that they were and felt themselves to be, not as purveyors of youth-corrupting race music, as was the case in some parts of the U.S. While in Copenhagen, Gordon was able to record continually. He was lucky in that regard. Unlike a lot of brilliant bebop players who found themselves no longer in demand, Gordon was captured on tape at the peak of his powers. There is not a bad record in his discography, says Yanow.

Meanwhile, back in the States, Gordon was being slowly forgotten. He was abroad for 14 years, and plenty of music came and went. It was the rock-star era; a musician was only as popular as his last cut. Yet when Gordon returned to the United States in 1976, the public suddenly remembered. The lines to hear him play, says Yanow, went around the block. He remained in the States until the end of his life, in 1990.

"Throughout its history," Yanow says, "jazz was a search for freedom." And yet to be free, Gordon had to follow his own sense of music out of the country of his birth, and indeed of jazz's birth. While he was abroad, the public briefly forgot Dexter Gordon. But as these photographs attest, his colleagues and friends who knew him best, and who understood the rarity of his gift, never did.