"Oh, the Humanity!" and the Hindenburg 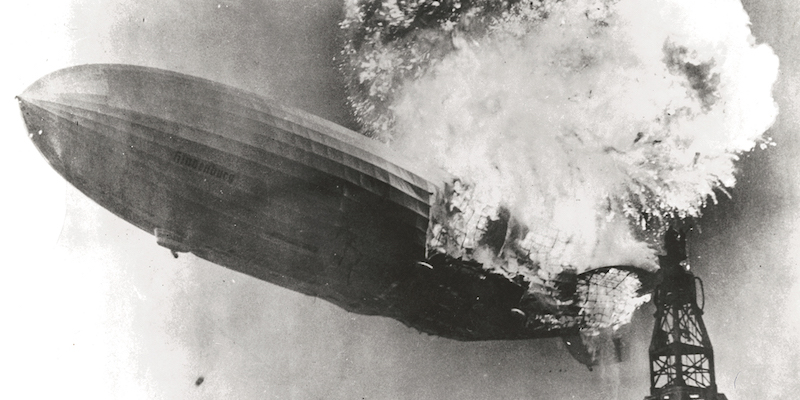 Over the years, ANTIQUES ROADSHOW has uncovered a number of relic items that survived the infamous Hindenburg explosion in 1937. Here you can listen to the unforgettable eyewitness radio broadcast from the scene of the disaster.

At the 1999 ANTIQUES ROADSHOW event in Tampa, Florida, a man brought a melded fork to find out its value. This was no ordinary piece of cutlery; it was one with tragedy in its past. Marked with the letters "L.Z." — an abbreviation for "Luft Zeppelin" — this fork was recovered from the tragic 1937 explosion of the airship Hindenburg over Lakehurst, New Jersey. Collectibles expert Rudy Franchi inspected the fork, mentioning that the metal fragments attached to the tines were actual pieces of the Hindenburg. The fork, he said at the time, would fetch a price of $8,000 to $10,000.

"Crashing, oh! Four- or five-hundred feet into the sky and it ... it's a terrific crash, ladies and gentlemen. It's smoke, and it's in flames now; and the frame is crashing to the ground ... Oh, the humanity!"
—  Herbert Morrison

"My mother and father were stationed [in Lakehurst]," explained the owner of the fork, "he was an engineer with the Coast Guard." The night the Hindenburg arrived, the father had, like many, gone out to view the impressive Zeppelin's arrival. "As it exploded," he said, "[the fork] fell to his feet. He later was part of the crew that testified because as an engineer, they thought he might have something to say."

As the largest airship ever designed, the German-built Hindenburg was 804 feet long and built for commercial air service between Germany and the United States. The airship was filled with hydrogen gas, which played a large role in its demise due to hydrogen's extreme flammability. When an electrical discharge over New Jersey ignited a fire, it took mere minutes for the enormous Zeppelin to fall spectacularly to earth. Out of some 97 persons on board, including crew, 36 perished in the disaster.

Though it was not the Hindenburg's maiden flight, the event on May 6, 1937, did draw press attention for its first anniversary. This was its first transatlantic flight of the year, having completed 10 round trips in 1936 with 1,002 passengers.

Reporting on the arrival of the ship was American radio reporter Herbert Morrison and sound engineer Charles Nehlsen, whose broadcast for Chicago station WLS Radio became the iconic eyewitness coverage of the tragic event — forever cementing the phrase "Oh, the humanity!" in our collective memory. Years later, Morrison recalled using these words to describe the event because he had thought all passengers on board had died —which did not turn out to be the case.

Still, when listening to his broadcast and witnessing the flames billowing in the frame of what once represented the promise of a new form of transportation, those words resonate powerfully.