Who Were the “Tiffany Girls”?

While Louis Comfort Tiffany was alive, he gave the illusion that he designed everything personally. But recently uncovered letters reveal there were many talented women — known as the "Tiffany girls" — involved in important work behind the scenes at Tiffany Studios.

At the August 2013 New York City ANTIQUES ROADSHOW, a woman brought in a rare poppy inkwell made by Tiffany Studios, apparent in the quality of the piece, with its mosaic design, and the mark on its base. While Louis Comfort Tiffany was alive, he gave the illusion that he designed all such pieces — even actively encouraging that assumption. But recently uncovered letters revealed that many highly talented women were involved in the work behind the scenes at Tiffany Studios, and they came to be known as the "Tiffany girls."

According to appraiser Arlie Sulka, owner of Lillian Nassau LLC in New York, the inkwell that came to ROADSHOW that day was designed by one of the most talented among them, named Clara Driscoll. "She designed it," Sulka said. "And if she didn't actually work on it, it's likely that one of the other Tiffany girls did."

Tiffany required women who worked for him to be unmarried, and they were forced to leave once they were engaged. Because of this rule, Driscoll came and went three times to Tiffany Studios. She started in 1888 and then left when she married Francis Driscoll. But when he died in 1892, she returned to the Tiffany Glass Company. She was put in charge of six women, and after just two years, 35 women worked underneath her. In 1896 she left again when she became engaged, but when her fiancé disappeared mysteriously, she returned to Tiffany Studios a third time. It was then that Driscoll and the so-called Tiffany girls were involved in the execution of many of the firm's most prestigious works, from lamps to mosaics.

“It wasn’t that unusual for the designers’ names to remain anonymous,” Sulka says. “Tiffany preferred his name in the forefront.”

But Driscoll's most important designs were for Tiffany's famous lampshades, and she created some of Tiffany's iconic designs, such as the Dragonfly, Wisteria, and Poppy. In 1903, the unionized male workers tried to close her department. While they succeeded in getting her to limit the size of her workforce, she did win the right to design all the lampshades as well as the small luxury goods, which were executed by the women.

Despite Driscoll's essential role, Tiffany rarely acknowledged her design work or that of the Tiffany girls publicly. It wasn't a bias against women per se; Tiffany also left unmentioned the creative work that was done by men in his business, including that of Arthur J. Nash, who supervised Tiffany's glassworks that produced the unique glass. "It wasn't that unusual for the designers' names to remain anonymous," Sulka says. "Tiffany preferred his name in the forefront."

And the accomplishments of these women might have gone unknown forever if not for a recent discovery of hundreds of pages of letters Driscoll wrote to friends and family about her work. The letters were discovered in 2005, when three people — the late Nina Gray, Martin Eidelberg, and Margaret Hofer — almost simultaneously discovered niches of the Driscoll letters that documented the work she had done for Tiffany. Some of the letters had been collected at the Queens Historical Society, while other correspondence was part of the Kent State University Library. The three came together to create an exhibition of the work of these women, called A New Light on Tiffany: Clara Driscoll and the Tiffany Girls, which became a book by the same name. 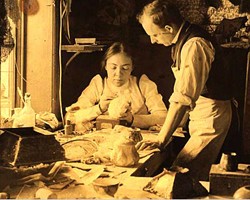 Clara Driscoll in a Tiffany Studios workroom with another Tiffany employee, Joseph Briggs, ca. 1901. (Image and description from Wikimedia Commons)

"The discovery of the letters was the freshest info to appear on the Tiffany scene in years," Sulka says. "There were few records of what was taking place inside Tiffany Studios — until these was uncovered."

Sulka notes that the letters changed the way the inner workings of Tiffany Studios were viewed. "So often, we said, 'Louis did this or that,' but it turns out he had wonderfully competent women working for him," Sulka says.

According to A New Light on Tiffany, "it was possibly Clara who hit upon the idea of making leaded shades with nature-based themes," which Tiffany became known for. One of the things Tiffany and Driscoll shared was a love of nature, and in her letters she writes of trees and flowerbeds coming into bloom, and the plants and other wildlife that inspired her. But she rarely drew or painted the nature used in the art herself. Instead, she relied on her good friend Alice Gouvy, who Driscoll felt had superior artistic talents, as well as other artistic women in the firm such as Agnes Northrop. The work, in the end, was collaborative, and Driscoll points out that many times a small group of women would work together to complete a single lampshade, especially on rush orders.

She also designed some of the candlesticks, inkstands and many of the leaded-glass shades and mosaic-clad bases — items that helped earn Tiffany his reputation at the turn of the century. In her letters, Driscoll makes clear that Tiffany rarely changed her designs. Driscoll, it might be said, was the hidden genius behind the public genius of L.C. Tiffany himself.

How much would the inkwell brought into the New York City ANTIQUES ROADSHOW sell for today? "It could sell for between $25,000 and $30,000," Sulka says. "And if you were to replace the liner — and it would be perfectly fine, as long as it's original Tiffany — the inkwell would be worth as much as $50,000 in a retail shop.