Psychedelic Style at the Apple Boutique

The corner of Baker Street and Paddington Street in London became the apex of psychedelic chic in December 1967 when the Beatles opened their Apple Boutique, an extension of their nascent brand, Apple Records. Adorning the shop's exterior was a vibrant mural designed by the Dutch art collective The Fool, featuring undulating colors and a mesmerizing motif. According to Paul McCartney at the time, the store was "a beautiful place where beautiful people [could] buy beautiful things.” At the 2014 Chicago ANTIQUES ROADSHOW event, a group of outfits purchased from the Apple Boutique in 1968 caught the eye of appraiser Karen Augusta, who said they were "completely iconic from the late 60s." Sumptuous, shimmering, and lavish, their beauty was certainly distinctive. Augusta gave an auction estimate for the group of $15,000 to $17,000. 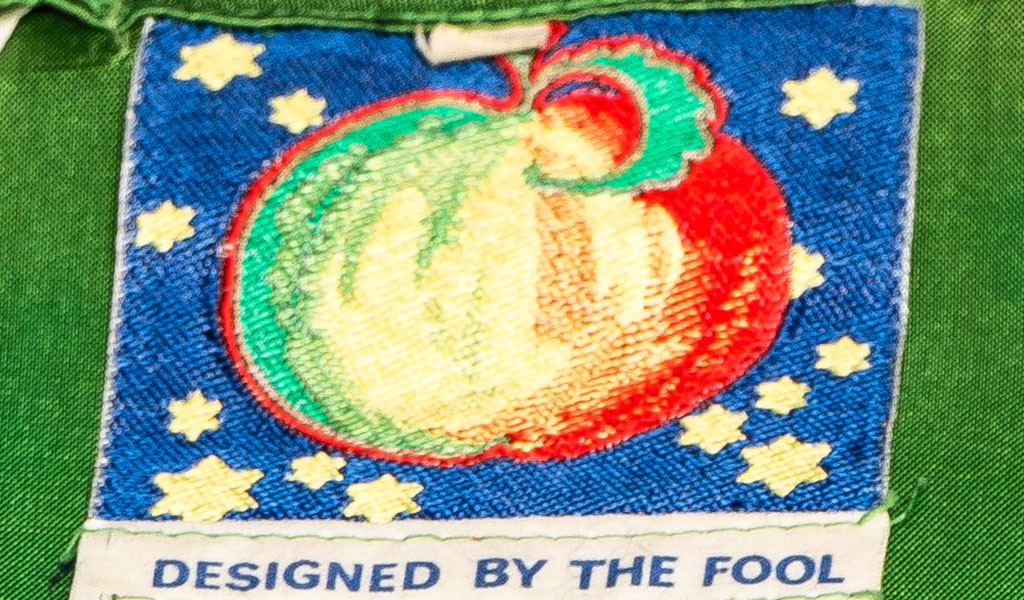 The clothes purchased from the Apple Boutique were iconic ensembles designed by the Dutch art collective, The Fool. This particular label shows the boutique version of the Apple logo. ©2014 Augusta Auction Company. All Rights Reserved

The Apple Boutique had a quality often shared by beautiful things: ephemerality. As the first business venture for the Beatles outside of entertainment, and the first time the Beatles used the Apple logo outside of the record world, the boutique epitomized experimentation in style, expression, and taste. The influence of The Fool gave the boutique its conspicuous appeal. Led by Simon Posthuma and Marijke Koger, the collective created colorful clothes not only for the boutique but for the Beatles' personal closets, too. One their Beatles commissions included the inner sleeve of the Sgt. Pepper's Lonely Hearts Club Band album, as well as front cover of the album that was never used. So when it came to designing a mural for the store building façade, The Fool took advantage of the large canvas they'd been given. But permission for painting the mural had not been granted, and thus Westminster Council required the wall to be repainted white. This marked the beginning of the boutique's downfall.

The store had a problem with liberation — of the shoplifting sort, that is. "People that worked at the store would steal the clothes, the customers would steal the clothes, and the owners, the Beatles, thought it was very uncool to complain or do anything about it, so they were losing money," Augusta said. The Apple Boutique only ended up staying open for seven months, closing on July 30, 1968. Instead of a conventional liquidation of assets, the Beatles decided to give away all products, first keeping some for themselves and their friends, then disseminated them to the public.

Despite the boutique's failure, the building was converted to apartments in 2013 as an homage to the Beatles' venture, calling the units the Apple Apartments. Although the mural is no longer present, that particular street corner is seeking to revitalize its distinctive beauty once more.

Take a look at the original mural below, which was painted over shortly after its creation.