This 19th-century John Cromwell tobacco store trade figure at the July 2014 Chicago ROADSHOW event was appraised by expert Allan Katz for a retail value of $10,000 to $15,000.
Support provided by: Learn more

Cigar store Indians, made of carved wood or molded metal, were popular symbols of the 19th and early 20th-century tobacco trade. Today, collectors of these statues appreciate both their striking visual appeal and the considerable skill of their carvers. But the figures also draw criticism for being simplistic and demeaning stereotypes of American Indians.

New York carver John L. Cromwell, who had made his name largely as a maker of ship figureheads, was capitalizing on what had become, by the mid 1800s, a conventional marketing idea: the commercial association of American Indians and tobacco. Thousands of these tall, sculptural figures were created in America during the 19th and early 20th centuries for the hugely profitable tobacco trade. And although not all tobacco figures portrayed Native American men and women, as folk art appraiser Allan Katz explained, "The reason for it is the Indians taught the settlers how to raise, plant and harvest tobacco."

The figures were a product of their time, a period fraught with prejudice against indigenous peoples.

The figures were a product of their time, a period fraught with prejudice against indigenous peoples. The statues helped to invent and then reinforce the quintessential stereotype of an “authentic” Native American by often depicting figures with bronze-colored skin wearing feathered headdresses, long fringed skirts or shirts, and moccasins. Critics have compared the characters to racist lawn ornaments of black jockeys. Two of the more common types of Indian cigar statues portray the “noble savage” with a stoic expression and passive stance; or the warrior, who brandishes a weapon he’s poised to use.

In their day, these silent statues were effective communicators, meant to indicate to all — including the illiterate and non-English speakers — what was for sale. What they represent today to citizens of the 21st century is a more complicated message, eliciting both appreciation and disapproval.

See the complete Appraisal segment page in our Archive 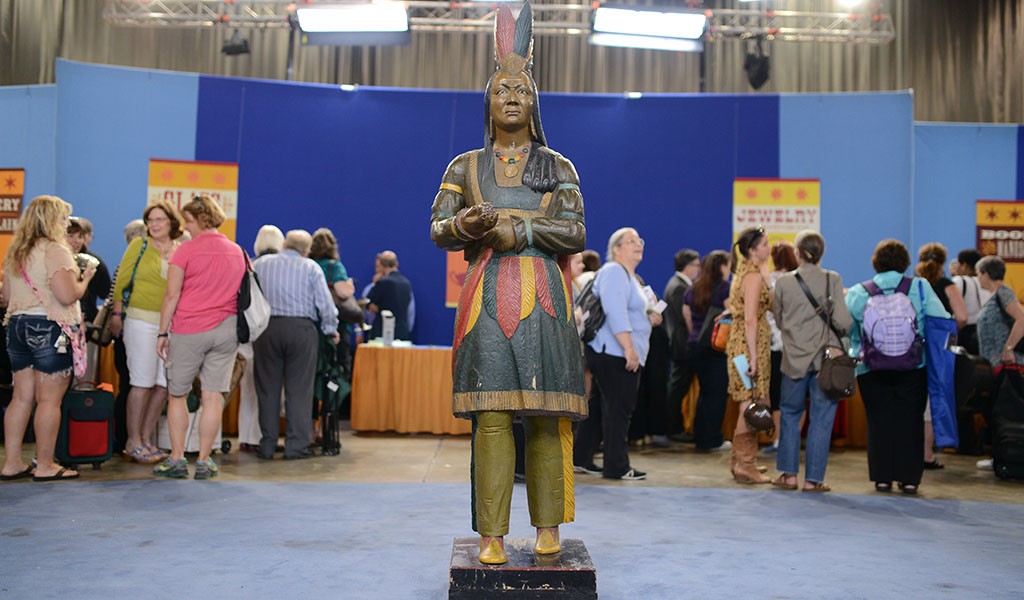 Figures such as this reflect the prevalence of prejudices against indigenous peoples during the 19th and early 20th centuries.