At the 2011 Tulsa ANTIQUES ROADSHOW event, Lark Mason appraised a collection of Chinese rhinoceros horn cups in the most valuable ROADSHOW appraisal to date. However, they raise questions about the laws and regulations that govern the owning and trading of objects derived from animals.
Support provided by: Learn more

More information about the laws and regulations that govern the owning and trading of objects derived from animals.

Over the past four decades, Doug, a resident of Tulsa, Oklahoma, acquired his collection of rhinoceros-horn libation cups at great personal cost, maxing out credit cards and curtailing vacations whenever a specimen caught his eye. But he wasn't pursuing a financial investment. Rather, he had a passion for the delicate craftsmanship that can turn a shapeless chunk of keratin into a nearly translucent, filigreed lotus blossom or ceremonial wine vessel. When Lark Mason, one of ROADSHOW's Asian Arts specialists, informed Doug that his $5,000 collection would now be worth $1 million to $1.5 million at auction, Doug was flabbergasted. It was the highest appraisal ever given in the history of the series. 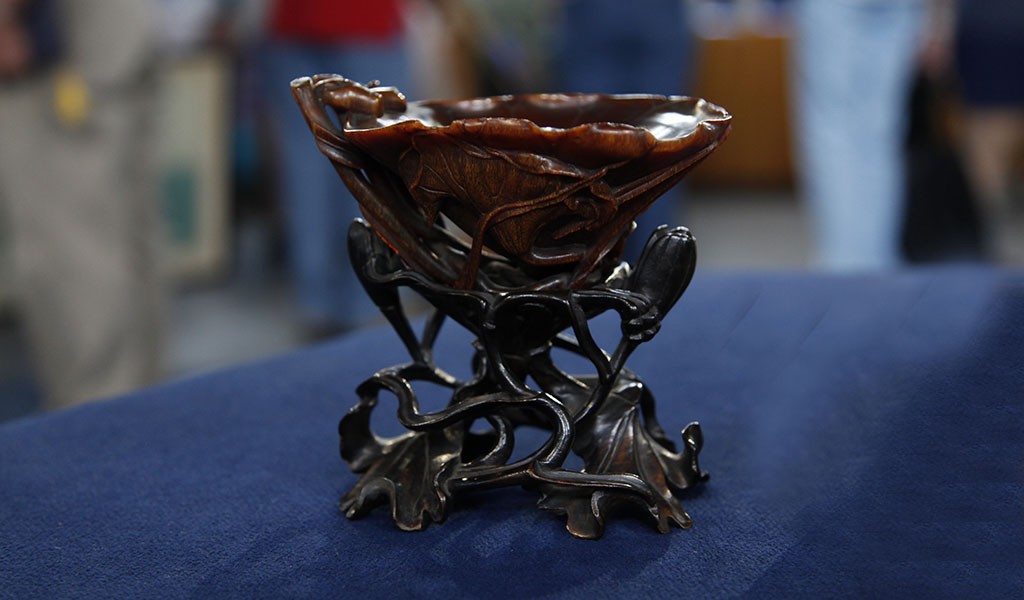 Normally, the only risk you run in buying a poorly attested antique is making a bad investment. In the case of animal-derived objects, the risks can be far greater After the recording was initially publicized we heard from viewers who were concerned about the practice of collecting objects that come from endangered species. While the subject is both controversial and complicated, there are laws governing the owning and trading of animal materials that any informed collector should bear in mind.

As Mason pointed out during the appraisal, the high value was partially due to market fluctuations. But rhinoceros-horn libation cups are rare, and thus valuable, for another reason: Rhinoceroses are endangered, and international law prohibits the import and export of any rhinoceros-derived object. The cups in Doug's collection, dating to circa 1700, were crafted centuries before the international regulations were in place — and also before rhinos were endangered — so it was legitimate. But even in the case of bona fide antiques, collectors like Doug must be remarkably diligent if they are to avoid running afoul of the laws governing trade in animal materials.

Normally, the only risk you run in buying a poorly attested antique is making a bad investment. In the case of animal-derived objects, the risks can be far greater

"All animal materials could have some form of regulation," says Michael McCullough, a New York lawyer who specializes in customs and trade issues. "Many people think it needs to be some exotic animal, but it doesn't." Scrimshaw, cat-pelt rugs, carved horns and eagle-feather headdresses send up obvious red flags, but with three layers of international, federal and state law, a lot of seemingly inoffensive material gets caught up in the net, too. The Migratory Bird Treaty Act alone prohibits the collection of the "parts, nests and eggs" of over 800 birds, many of which, like the American crow and the turkey vulture, are not remotely in danger of extinction.

Regulations vary so widely from species to species that it's almost impossible to make any generalizations. So how should the cautious collector proceed? McCullough says the first step in determining where an animal-derived object falls in the regulatory terrain is to answer the most basic question — What animal does it come from? — with scientific rigor.

"It's not enough to say, 'Oh, this looks like it could be bear fur or whale bone,'" he says. "The material needs to be identified scientifically, down to the level of species. If you have a piece of elephant ivory, for example, it's probably restricted in some way, but the exact regulations depend on which species of elephant you're dealing with."

Universities, zoos and major museums are good places to start seeking expertise on a piece you may be uncertain about. Once the species has been identified, it becomes possible to begin navigating the regulatory labyrinth, either with the help of a lawyer or by contacting the Fish and Wildlife Service.

Is the animal protected under the Convention on International Trade of Endangered Species (CITES)? If so, does the federal government place any additional restrictions on trade and ownership? What exactly is prohibited? In the case of very old antiques, the ownership and sale of material from an endangered species is often allowed, so long as all the paperwork and permits are in order.

"But in other cases," says McCullough, "it can stay in your family but you can't sell it. You might not even be able to donate it to a museum."

McCullough says it's important to bear in mind that the regulations can have as much to do with paperwork as with the proscribed material itself. For example, he recently heard about a man who'd come to New York and bought some ivory that had been legally produced, exported and sold. But when the man was boarding an international flight, he didn't declare the ivory on his customs form. He just put it in his pocket.

"He's been in jail for a couple of months now," says McCullough.

There can be no doubt that antiques containing animal materials are among the most legally fraught on the market. But the same principles that apply in establishing provenance for a Louis Quatorze commode are at work here, too: You have to demand that the seller provide you with documentation that tells you exactly what you are buying. Normally, the only risk you run in buying a poorly attested antique is making a bad investment. In this special case, the risks can be far greater, but as Doug's million-plus-dollar cup collection shows, so can the rewards.