Edward, whose uncle was one of the rescue divers that assisted the stricken Squalus, brought his collection of memorabilia from the disaster to the Bismarck ROADSHOW in May 2014.
Support provided by: Learn more

Since the advent of the first submersibles, rescuing the men aboard a stricken sub was practically impossible. But that changed in 1939, when the dedication and ingenuity of Lt. Cmdr. Charles Momsen helped save the lives of 33 sailors trapped aboard the USS Squalus off the coast of New England, 240 feet beneath the ocean's surface.

A $7,000 collection of naval memorabilia brought to the Bismarck ANTIQUES ROADSHOW in May 2014 commemorates a minor yet remarkable turning point in the history of the U.S. Navy. As the collection's owner, Edward, told appraiser Jeff Shrader, his uncle had served as a rescue diver in the 1930s, and earned the Navy Cross for his part in the rescue of the Squalus crew. 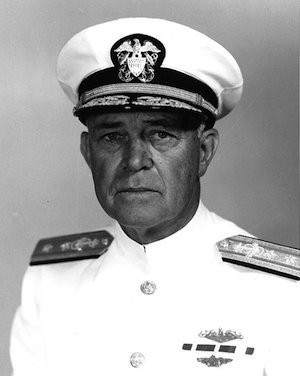 Charles "Swede" Momsen later in his naval career. He retired in 1955 with the rank of rear admiral having won the Navy Cross, the Legion of Merit multiple times, and a number of awards for distinguished service. (Image source: Wikimedia Commons)

But at that time, decades after the advent of modern submarine warfare, it was still generally acknowledged that in the case of a downed sub, there was little choice but to leave the stricken vessel on the sea floor — dooming any survivors to an almost unimaginable fate. Rescue was perilous, if not technically impossible: There were no craft in existence that were capable of quickly plunging to the bottom of the ocean, docking with a disabled sub, taking onboard its crew, and ascending to the surface while maintaining a livable air pressure. Consequently, the moment a submarine sank, even if it was in relatively shallow waters, their fate was all but decided.

This surprising lack of capability was finally solved by an energetic and creative naval officer named Charles “Swede” Momsen. He is the man who oversaw the rescue of the USS Squalus, and he remains one of the Navy's lesser-known heroes.

When she was commissioned in 1939, the Squalus was the most sophisticated submarine the Navy had ever built. She measured 310 feet, stem to stern, 27 feet wide, and carried a crew of nearly 60. On May 23, the Squalus embarked on her final test run, upon completion of which she was due to enter service. After moving out into open ocean, the submarine's commander sent a message to base indicating that he was about to dive and go radio-silent. At the end of the dive, upon the Squalus' return to the surface, he would send another message letting command know that the test had been successful.

Rescuing the men aboard a sunken submarine was all but impossible until 1939, when Charles Momsen helped save the lives of 33 sailors trapped 240 feet beneath the ocean's surface.

When two hours passed with no additional communiqué from the Squalus, Navy command realized something was wrong. They ordered an immediate and massive rescue attempt, and put Lt. Cmdr. Momsen in charge.

With Momsen aboard, the Sculpin was the first to reach the Squalus' last known position, at 4:00 A.M. the following morning. There they found the red smoke of the Squalus' distress signal and the rescue buoy the Squalus had also ejected; inside that was a phone that rang through to the submarine. Lt. John Nichols of the Squalus quickly conveyed the details of their situation, then went to get his commanding officer, Lt. Oliver Naquin, who took the phone but had only time to greet the captain of the Sculpin before the cable snapped, cutting off communications.

The rescue teams were eventually able to learn that an induction valve had been mistakenly left open, so when the submarine dived, seawater flooded in, sinking it. The Squalus came to rest on the sea floor 240 feet down. Twenty-six men died during the initial accident, and as the water mixed with acid from the submarine's ruptured batteries, toxic chlorine gas started to fill the forward compartment.

For the next 36 hours, the trapped submariners communicated with their rescuers via Morse code, banging out dots and dashes on the hull of the Squalus with a hammer.

Fourteen years prior, Momsen had attempted to rescue a downed sub, the USS S-51, under similar circumstances, but with no way to locate the downed vessel or extricate the trapped submariners, all aboard died. This and other disasters drove Momsen to devote his private time to developing rescue equipment, including the Momsen lung, as it came to be known — a one-man emergency breathing apparatus that he tested on himself — and a diving bell that could descend hundreds of feet of ocean and seamlessly dock with an immobilized submarine.

When the Squalus sank, Momsen's bell was still in prototype and had never been used before. But there were no other options, so Momsen sent the bell down again and again, taking on six or seven survivors at a time. When the bell was making its final ascent, carrying the submarine commander and other crewmen, the rescuers noticed that the cabling connecting the bell to the rescue ship had become frayed. They turned off the mechanical winch and gently pulled the diving bell up by hand.

The bell performed perfectly. All 33 men who survived the initial disaster were saved — the same number that had died in the wreck of the S-51. As much as the courage of the divers, it was Momsen's ingenuity and entrepreneurial spirit that saved the crew of the Squalus. But Navy brass were annoyed that Momsen had developed his life-saving technology outside the chain of command, so when it was time to deploy his diving bell throughout the fleet, they named it after someone else. Momsen continued a distinguished naval career, however, serving in the Pacific theater during World War II, ultimately becoming commander of the Submarine Force's Pacific Fleet and retiring with the rank of vice admiral in 1955. Yet Momsen was also a modest man, so it was years before he would admit that he had been hurt at the Navy's slight in regard to his diving bell. He died in 1967, a figure of reverence to a few but unknown by most. In 2004, as though by way of apology, the Navy finally put things right, christening a new destroyer the USS Momsen.

The medals and memorabilia Edward brought to the Bismarck ROADSHOW give us a direct connection to the Squalus incident, which, thanks to "Swede" Momsen, was the first U.S. Navy submarine disaster that ended in a successful rescue. Within a few months, the Squalus was salvaged (also under Momsen's leadership), and later refitted and launched as the USS Sailfish — which proved a valuable component of the Pacific Fleet, with its crew earning nine battle stars by the end of the war.

Edward's remarkable carving of a man in a full-body diving suit gives the bravery of the divers who assisted in the rescue of the Squalus their due. But without the resourceful leadership of Swede Momsen, the divers' courageous efforts would have been futile. 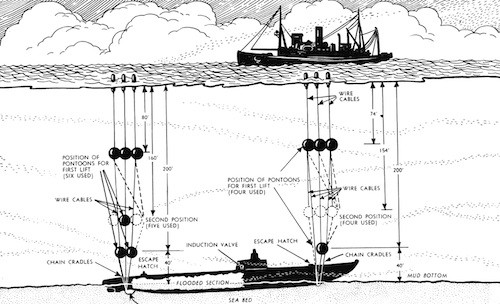 Diagram of the salvage apparatus used to raise the Squalus, originally published in the U.S. Navy's All Hands magazine in 1959. The Squalus sank on May 23, 1939, and after the surviving submariners were rescued, the arduous operation to raise the sub from 240 feet down and tow her to Portsmouth Harbor for refitting took until mid September. (Image source: Wikimedia Commons)