The Chicago Black Hawks logo as it appeared in the late 1930s.
Support provided by: Learn more

A vintage Chicago Black Hawks jersey at the Austin ROADSHOW raised the complicated and ongoing controversy of racial stereotypes in sports mascots.

Many of us are sports fans of one kind or another. For reasons of geographic location, school pride, or just family tradition, some of us loyally support teams whose name or mascot, like it or not, is a bit insensitive — or worse — by today's standards. In fact some of them seem downright racist.

We see lots of vintage professional sports memorabilia and uniforms on ANTIQUES ROADSHOW, and it was a Chicago Black Hawks hockey jersey from the late 1930s a guest named Tracy brought to the Austin show in June 2014, that got us thinking about the issue again. 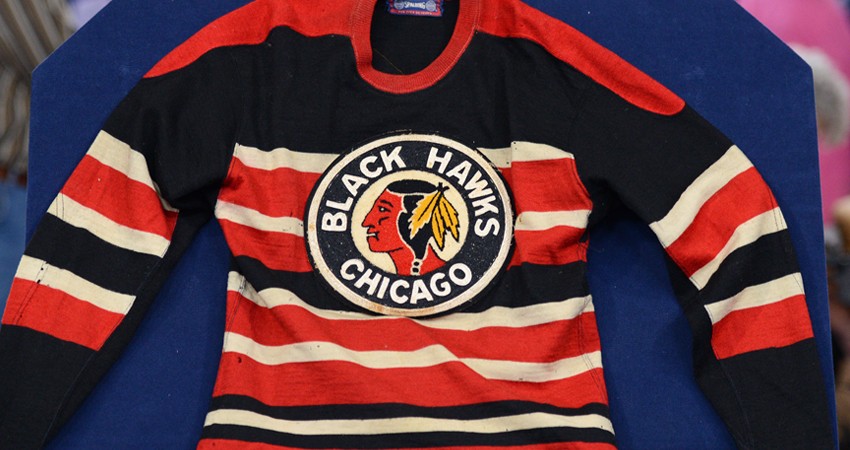 Sports Memorabilia expert Jasmani Francis gave the jersey an auction estimate of between $7,000 and $10,000.

The Black Hawks (or Blackhawks, as they're now known) are a peculiar example of this phenomenon. While the team's mascot is clearly a caricature of an American Indian, according to the Blackhawks' official website, the reason for that is circuitous. When Frederic McLaughlin founded his new hockey team in 1926, he decided to use the nickname of the U.S. Army 86th Division, which he had served with during World War I, and whose members called themselves the Black Hawks in honor of an early 19th-century Sauk Indian chief.

And of course there are many other organizations in most major sports with names, logos or mascots that memorialize this long-held tradition of blithely employing Native American references, symbols and stereotypical characteristics to represent the teams' supposed "fierceness."

In 1926, Frederic McLaughlin named his new hockey team for the U.S. Army 86th Division he'd served with during World War I, whose members called themselves the Black Hawks in honor of an early 19th-century Sauk Indian chief

Those uses display a range of insensitivities and poor taste, from arguably mild to quite extreme. On the relatively harmless end of the spectrum we might take the Seattle Seahawks as an example. Their logo is generally thought to derive from the design of this Northwest tribal transformation mask — but it avoids the exploitive depiction of native peoples. At the other end, it's broadly agreed that the Cleveland Indians' "Chief Wahoo" logo (*Editor's note), and the Washington Redskins' name itself, are patently offensive slurs.

Yet, as ever, the commitment to tradition — not to mention consistent branding — remains strong, and calls for change have so far met resistance on several fronts. Clearly it's a topic that inspires strong feelings on all sides, and given the complexity of perspectives and interest groups, no simple answer appears at hand.

If you're interested to read more on the topic, here's a selection of online features you may find informative and thought provoking:

Editor's Note: The Cleveland Indians removed the "Chief Wahoo" logo — first introduced in 1948 — from their uniforms and other team branding at the conclusion of the 2018 season.