This oil painting was purchased by its owner at a charity auction in Washington, D.C. for $3,100 in 1991.
Support provided by: Learn more

Why was this Haddon Sundblom oil painting cut from its original canvas and repainted? Find out more in a letter from Coca-Cola!

At the May 2014 ANTIQUES ROADSHOW event in Bismarck, North Dakota, the Christmas spirit descended upon the set as a familiarly festive face visited the appraisal table. It was the jolly Coca-Cola Santa Claus, as depicted by well-known illustrator Haddon Sundblom in an oil painting from 1965, one of over 40 paintings he created for Coca-Cola beginning in 1931. The painting was purchased by ROADSHOW guest Gary in 1991 at a Very Special Artists charity auction in Washington, D.C. for $3,100.

Sundblom’s Santa Claus, a grandfatherly, jolly, plump, and rosy-cheeked version of St. Nick, was used in numerous pieces of advertising during the mid-20th century by Coca-Cola. This particular painting, as appraiser David Weiss describes, is cut out from the canvas and laid down on a different green backing board, with no artist signature to be found. He also describes that the arm had been redone. These idiosyncrasies are vestiges from the painting's reuse for different promotional materials, clearly visible in the comparison of the painting to Gary's later purchase of an advertisement, which was also brought to ROADSHOW. The two pieces together, according to Weiss, would fetch an auction value range of $30,150 to $50,200.

In 1991, Gary was curious to find out more about his painting and its use at Coca-Cola, so he inquired with the company about its provenance. Read the response from Coca-Cola below! 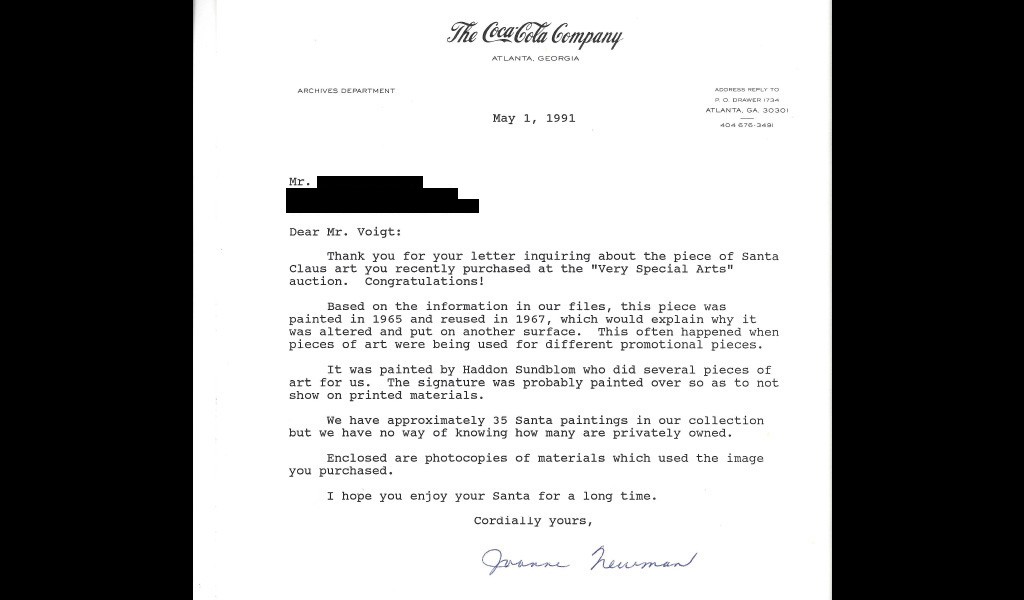 This letter is a response from Coca-Cola after the painting owner inquired about its provenance and idiosyncrasies.