Since her emergence in the 1950s, "Big Eyes" artist Margaret Keane's path to worldwide fame has been an unusual one.
Support provided by: Learn more

Margaret Keane is known for her iconic "Big Eyes" paintings. When they first emerged on the market in the late 1950s, she let her then-husband take credit for her work. But in the mid-1980s Keane proved her artistry in a courtroom. She still paints, and her story was made into a 2014 movie, Big Eyes, directed by Tim Burton.

The ANTIQUES ROADSHOW guest who brought a painting of a Hawaiian girl by Margaret Keane to the Santa Clara event in June 2014 perfectly epitomizes people's reactions to Keane's work when she confessed, "I'm not very fond of it. My husband loves it." The now iconic "Big Eyes" paintings have gotten love-it-or-hate-it reactions from critics and collectors since they first emerged on the market in the 1950s. However, at that time, Keane's then-husband, Walter Keane, claimed the art as his own. Walter has been characterized as a manipulative charlatan, but also as an incredible marketer of the paintings his wife created. 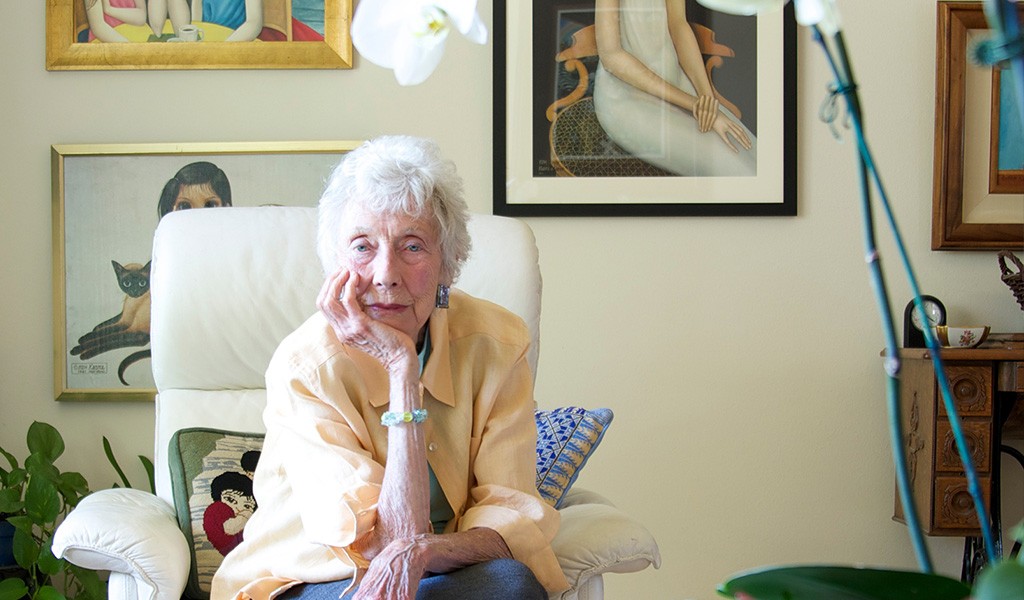 Margaret Keane, seen seated here among several of her artworks, is known for her iconic "Big Eyes" paintings. "I don't know why I paint what I paint. I think it comes out — it's kind of my subconscious or something," she said in an interview with KQED. Credit: Robert Brown, Keane Eyes Gallery, San Francisco, CA

Keane admits she was complicit in the charade, but has said she struggled greatly with allowing Walter to claim her art as his own. "I was too weak and I didn't know what to do and all the time the paintings were — the popularity was snowballing and I was getting into this deeper and deeper," she told KQED Arts. "And then he really put the pressure on me and it was a total nightmare, and I finally just gave in and said, 'You take the paintings and I'll develop another style.'"

The couple divorced in 1965, Margaret moved to Hawaii where she continued to paint, and in 1970, she publicly declared that it was she — not Walter — who had painted the large-eyed children all along.

The courtroom "paint-off" that appraiser Peter Fairbanks referred to on-air took place in 1986, when Margaret was suing Walter for slander. The judge demanded that Margaret and Walter each produce a painting, right there, in the courtroom. Walter, who acted as his own counsel, claimed he could not perform due to an ailing shoulder. Margaret created the required proof in under an hour. Although Margaret won the case, she never saw the $4 million awarded to her by the court.

The guest who brought a painting of a Hawaiian girl by Margaret Keane to the Santa Clara ROADSHOW in June 2014 perfectly epitomizes people's reactions to Keane's work: "I'm not very fond of it. My husband loves it."

Robert L. Brown, executive director of Keane Eyes Gallery in San Francisco (who represents Margaret Keane) thinks the painting that came in to ROADSHOW in Santa Clara would have been created closer to 1986 when Keane was using more vibrant colors in her work (rather than the 1960s, as the guest assumed). Brown remarked that Keane sometimes revisits subjects and that the one that appears on ROADSHOW is very similar to a work titled "Keiki Lisa," created by Keane around 1970. More research is needed to pinpoint the date.

Margaret Keane continues to paint today and her story was made into a movie, Big Eyes, directed by Tim Burton (put him in the "love it!" camp as he collects Keane's art). It was released in December 2014, several months after ANTIQUES ROADSHOW's visit to Santa Clara.

When asked by KQED Arts about her creative process, Keane said, "I don't know why I paint what I paint. I think it comes out — it's kind of my subconscious or something. Sometimes I still paint sad because there's a lot of sadness in the world, but mostly my paintings are happy now."

You can see more of KQED Art's interview with Margaret Keane on the KQED website.

The guest’s husband wrote to us to say that it’s possible his mother acquired the painting in the early 1970s. Upon hearing this, Peter Fairbanks commented: “We know from the signature it was after [Margaret Keane] divorced Walter in 1965, and prior to the early 1970s when the guest believes her mother-in-law purchased it. However, further research will be needed to confirm the exact date it was created.”

Robert L. Brown also commented on the mediums Keane has used for her paintings, saying the vast majority of them have been in oil, not acrylic. "It's only within the last two years that she uses acrylic, and not because of drying time, but due to the toxins that have built up in her body.”